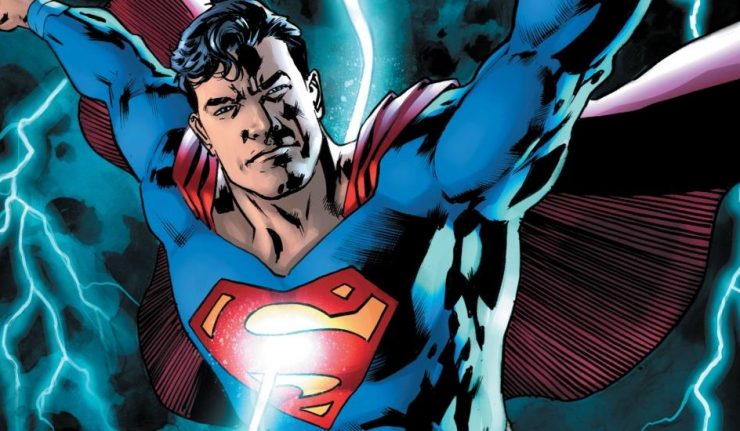 Superman #23: With Superman’s secret identity suddenly revealed to the world, many in his life are worried that he has been tricked or duped into destroying his own privacy! All the more worrisome is Superman has been very susceptible to mysticism. Could all this madness be magic related? It’s time to call the doctor…Dr. Fate!

Ever since Brian Michael Bendis took over as the writer of the DC’s Superman titles, his performance as writer has been inconsistent. He has given us some very good issues, some rather uninspired ones, and a number of mediocre stories. Overall, Superman #23 is one of his better efforts.

In this issue, Superman visits Justice League Dark‘s Doctor Fate to confirm that his recent major decisions were made of his own free will, and not influenced by any outside mystical influences. However, this appointment starts to take on the general tone of a regular doctor’s appointment, as Khalid asks Clark about his general health and state of mind as well as checking him out magically.

While this may be a slightly hokey way to set up the discussion, this does allow Superman to process the recent events in his life and examine his motivations for the actions he has taken. And in showing this, Bendis takes the opportunity to reflect on and try to justify the decisions he has made as writer.

I find Superman’s conclusions to be believable. Clark has generally not been in control of his life since Bendis has taken charge of it. He has been reacting to external forces, rather than deciding for himself. So ,it does make sense that he might make a major change of some sort as a way of trying to regain control. Whether or not revealing his secret identity was a good idea is debatable, but I can see how doing so might have been prompted by the urge to retake charge of his own life.

I am glad that Bendis does let Clark express his anger and frustration at missing out on several years of his son’s life. This is the one change that Bendis has made to the Superman mythos that I absolutely detest. Perhaps Bendis is trying here to justify that decision, but I would like to think that he’s regretting having made this change to Superman’s life. Perhaps there is some hope that he might be considering returning Jon back to the age he should be.

I’m not sure yet what to make of the new villain introced in this issue. We don’t learn much about Xanadoth, except that he appears to be a mystic threat connected to the Lords of Chaos. My first thought upon reading the name Xanadoth was to wonder if there was a connection to Madame Xanadu. As it turns out, there is a flashback that hints there actually may be such a connection, but we are left wondering what that connection may be for now.

I do have to wonder why Clark is opening up to the new Doctor Fate, someone he barely knows. Shouldn’t Clark be having this discussion with Lois. I am glad that Clark is processing his feelings and examining his motivations, in any case. But it would make more sense for him to be talking to his wife or a close friend rather than a new acquaintance.

And it looks like the matter of Superman appointing himself as ambassador of Earth has been settled in Bendis’ mind. Superman doesn’t even take a moment to question his motivations for doing so. It seems to me a very uncharacteristic move for Clark to make. And having the United Nations retroactively giving him that power is just glossing over a glaring mischaracterization.

While not a perfect issue, Bendis does do a decent exploration of what he’s been putting Superman through in the previous 22 issues. Hopefully, we will get to see more of this more introspective side of Superman once in a while. And maybe it might just lead to some favourable changes in Bendis’ Superman saga.