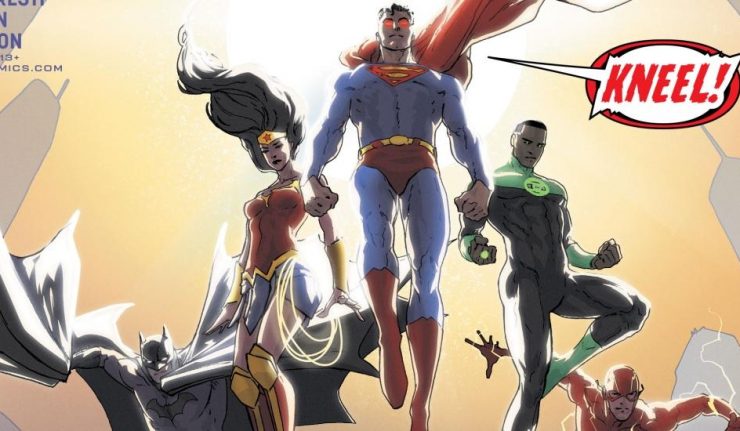 Justice League #48: As writer Simon Spurrier jumps on board for the start of the three-part tale “The Rule of War,” it’s close encounters…of a Justice League kind! After answering a distress signal from distant space, Batman, Superman, Wonder Woman, the Flash, and Green Lantern discover an abandoned cargo ship full of young aliens! When the League attempts to return the children to their home planet, they are met with awe, terror, and war! Thus begins a three-part storyline that will take the League to a previously unknown planet, with an all-new species, a dangerous mystery, and a new, otherworldly villain.

Justice League #48 sees yet another creative team change, as Simon Spurrier takes on the job of writing the title. I quite liked Spurrier’s writing on The Dreaming, so I have been quite eager to see what he would do with DC’s flagship team book.

Spurrier’s first story is already markedly different from his two immediate predecessors. Scott Snyder gave us a cosmic saga that tied into the reality-shaking events that affected the entire DCU. Robert Venditti gave us shorter, more self-contained stories that drew on the mythos of various team members. Spurrier’s first story follows neither path and gives us a story where the Justice League is set on a previously unseen planet with no familiar villains in sight.

The story seems to be centred around the question of how much the League should interfere in the politics of the alien cultures they help. The League find themselves in a situation where they can’t help but involve themselves in helping the people of Trotha. But in doing so, they inspire the people of that world to depose their tyrant ruler.

However,  the Trotha insist that the League should rule them in her place. The League can’t allow themselves to be made rulers of the planet, but they feel an obligation to help clean up the political mess they unintentionally helped to create. And to add to the problems, another alien race picks that exact moment of weakness to invade Trotha.

It’s interesting to see that Spurrier has kept the same team lineup from Venditti’s run. I wonder if Spurrier has any lineup changes in mind, or if the team will continue as it is for the time being.

The team also encounters an amusing translation glitch. The devices used by the League have trouble coping with the honorifics of a genderless society and use female equivalents by default. This leads to John Stewart’s bemusement at being referred to as “Ma’am”.

It’s too early to spot any potentially major problems with Spurrier’s interpretation of the League. Spurrier portrays the Justice League members in line with their traditional characterizations. There are no evident continuity mistakes, and Lopresti and Ryan’s visual depiction of the League is outstanding. I see nothing in this issue that is worrying.

Justice League #48 is a good first step in what hopefully will be an exciting new chapter for the Justice League. Snyder and Venditti’s runs are two very tough acts to follow. However, I have confidence that Spurrier will be up to the challenge.