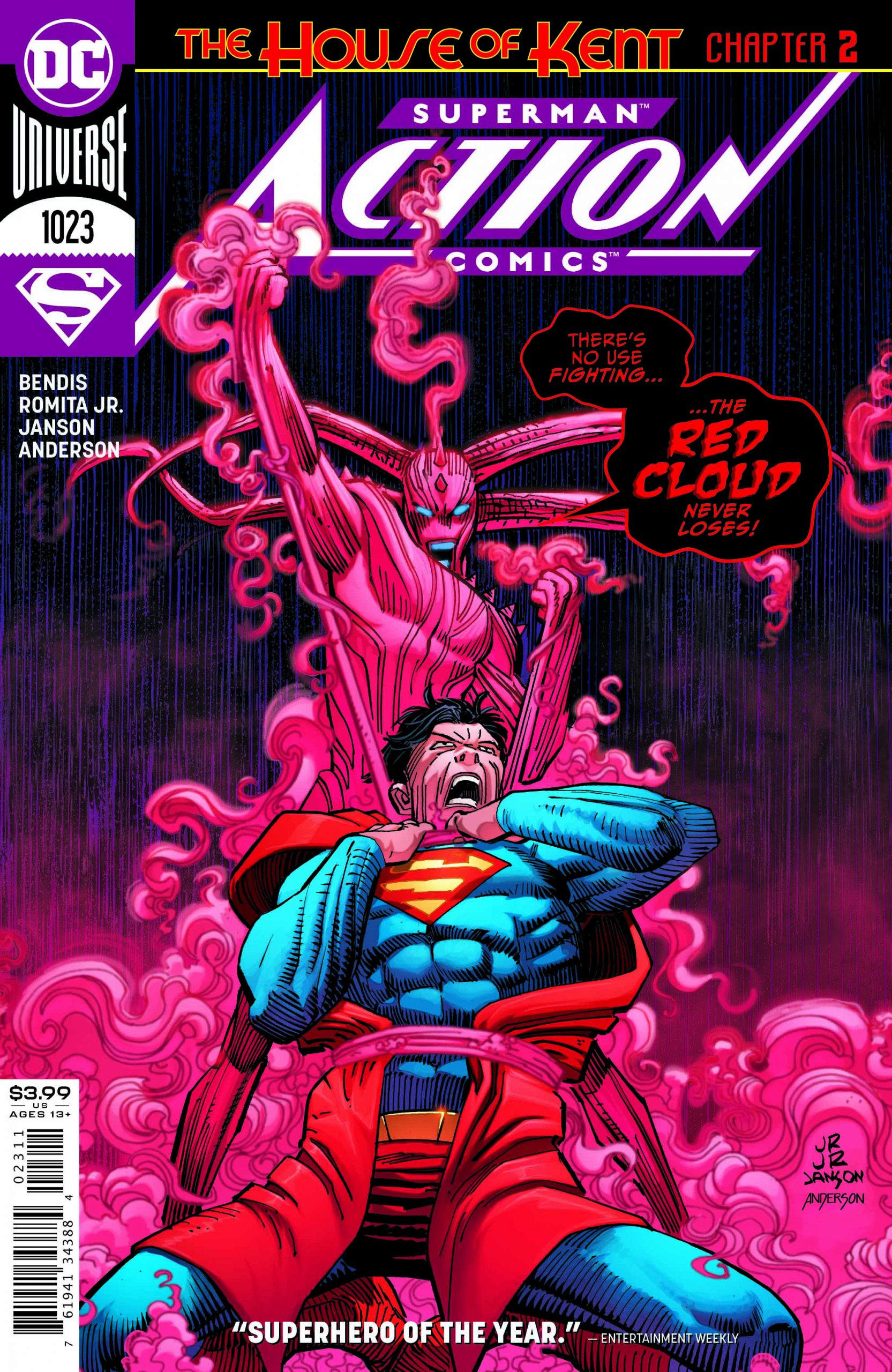 Superman, Jon and Conner save Lois and Jimmy from the hands of the Red Cloud.  Afterwards, Clark takes the fight directly to the Invisible Mafia.

The most interesting aspect of Brian Michael Bendis’s tenure on Superman has been the Invisible Mafia.  Like last issue, Action Comics #1023 continues to explore the nature of the Invisible Mafia.  The slow reveal about Leone is probably the high point of this aspect of the story.  She’s got a huge mystery surrounding her, and it’s portends to have a great payoff.  At some point.  And, hopefully it is a great payoff.  Because, so far, Bendis has yet to have a satisfying payoff in his work on Superman. 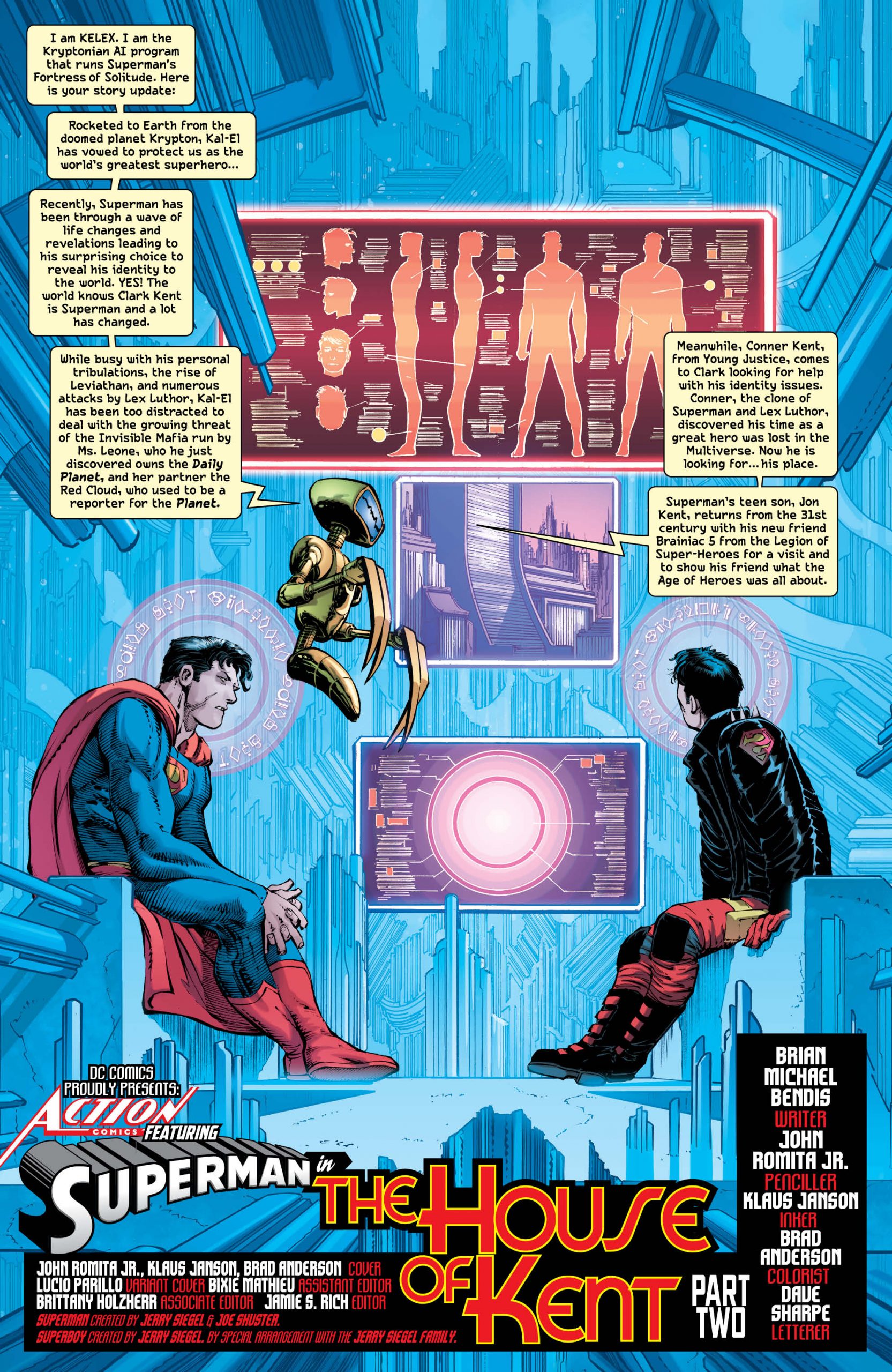 You can tell that Bendis is enjoying the opportunity to write Clark, Jon and Conner as a family.  It’s really the only thing Bendis has seemed to enjoy about the Super-family.  Everything else he’s turned upside down in order to torture the Man of Steel.  Although, he finally gets that Lois calls Clark, “Smallville” and not “Babe.”  When Lois gets Clark to the party with her “Smallville” invocation, it really does feel right, even if so many other things have felt wrong about Bendis’s portrayal of the Lois/Clark relationship.

One wonders why there is such lengthy exposition on the opening pages of the second chapter of a story arc.  However, it’s obvious as Bendis recaps the previous 22 issues of Action Comics and some of his Superman issues, that it’s possible that readers who haven’t been reading since Action Comics #1000, could be and probably would be lost without it.   It’s almost an admission that Bendis is lost in the story and is circling back around to make sense of his first six issues on Action Comics. 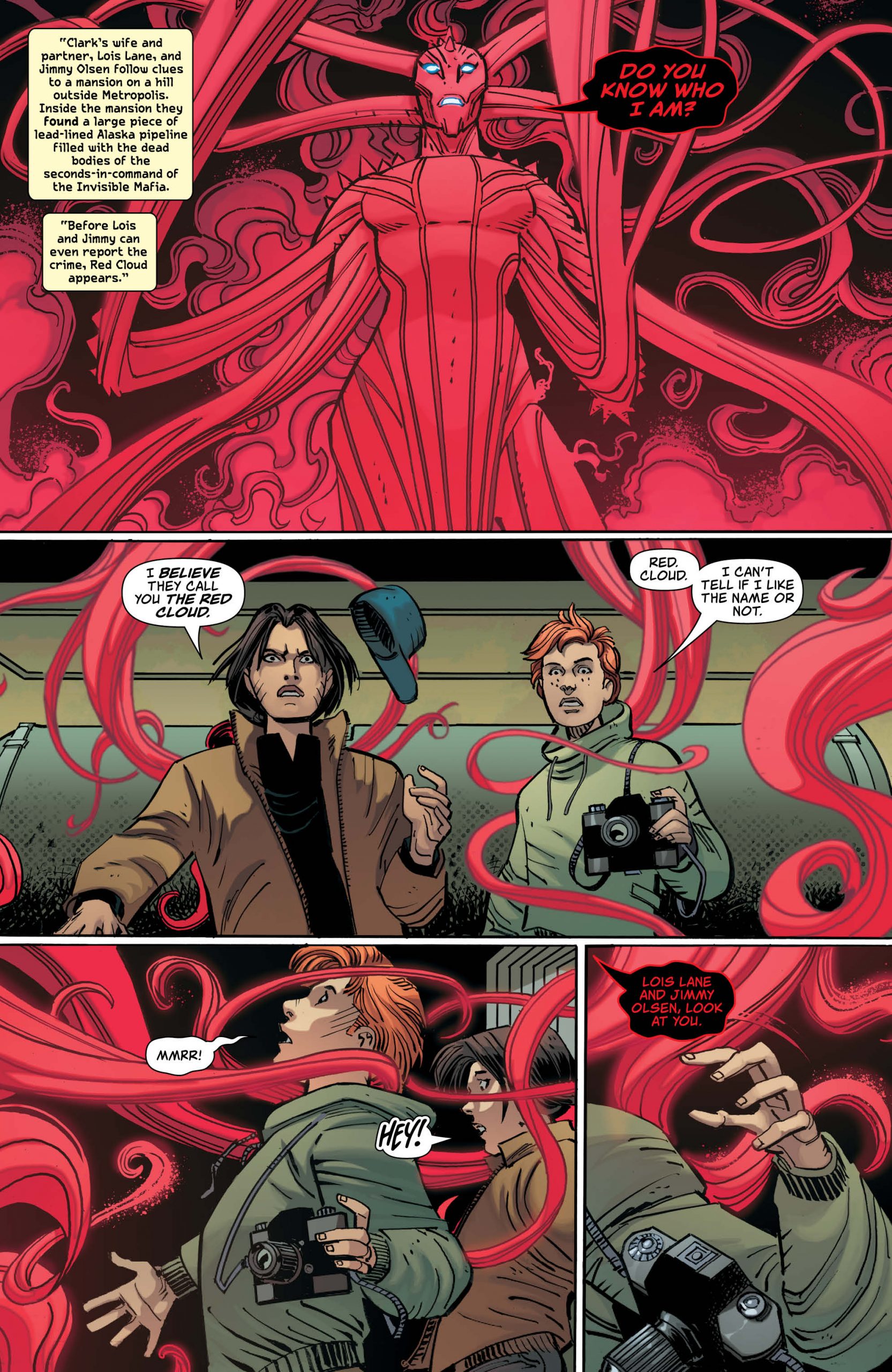 Although, it seems odd to think of this issue is a jumping on point, but that’s the way it’s presented.  Maybe, he knows people have forgotten about what he introduced two years ago.  Certainly, if you are still reading Action you’ve been around since Action Comics #1000 or before.  Sales aren’t exactly skyrocketing on this title.  Or, Superman for that matter.  That is to say, these books are not gaining new readers.

There’s some really clunky dialogue in this issue.  Jon and Conner come off as goofy as they exchange ideas at different points in the issue.  Robinson Goode’s speech as she denounces Superman as an alien ring very hollow.  It is the epitome of a cliche.  The real problem is that Bendis doesn’t go deep to make it believable.  Slowly uncovering Leone’s role has been enjoyable, but Goode comes off as a cipher with no depth of character.

It’s cringe-worthy when someone suggests that Conner looks like if “Superman and Luthor had a baby.”  This is an excellent example of how out of touch Bendis is with the definition of “clever.” 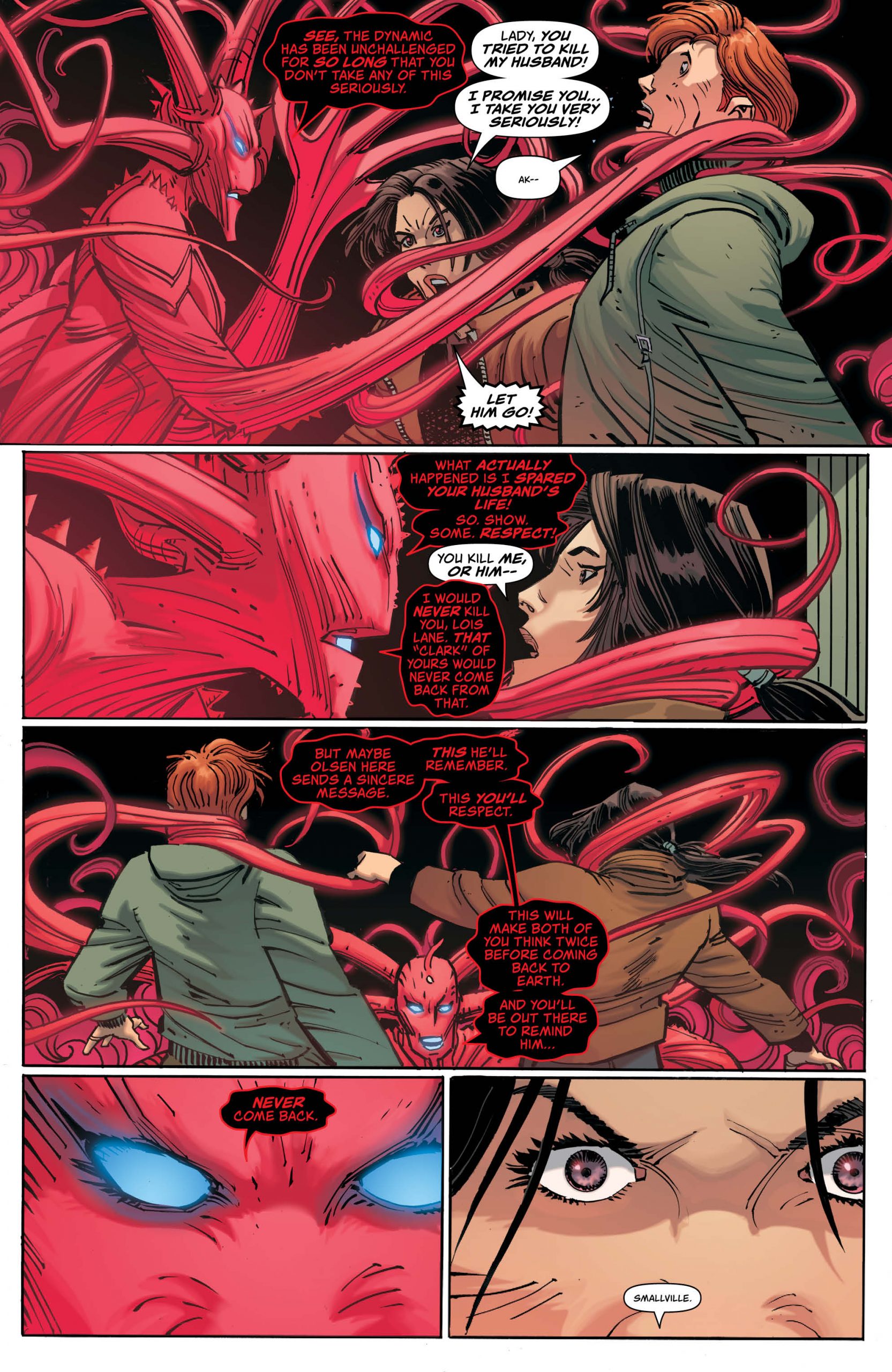 When Superman revealed his identity, everyone knew it was going to be sooner or later before a villain struck at friends and family of Clark’s.  Jimmy is the main target this issue and it doesn’t feel exciting or interesting.  It just feels telegraphed, because, OF COURSE that’s what would happen!  The Red Cloud’s comments about not killing Lois really don’t make sense.  If she’s trying to hurt Superman, why strike at Jimmy and not Lois?  Why does she want Superman to be able to recover emotionally?

Action Comics #1023 ends with Clark walking into a bar to take on some of Leone’s agents.  He does it shirt open with “S” revealed.  It’s completely bizarre.  Sure, it fits with what Bendis has done in respect to Superman revealing his identity, but it doesn’t really work.  It’s not Superman.  It’s some other character.  It reminds the reader how out of character the majority of Bendis’s run has been.  It reminds the reader that Bendis writes what he wants to write, even if it doesn’t  make sense for the character.  One has to hope for Superman’s sake this will all, eventually, just be a bad dream. 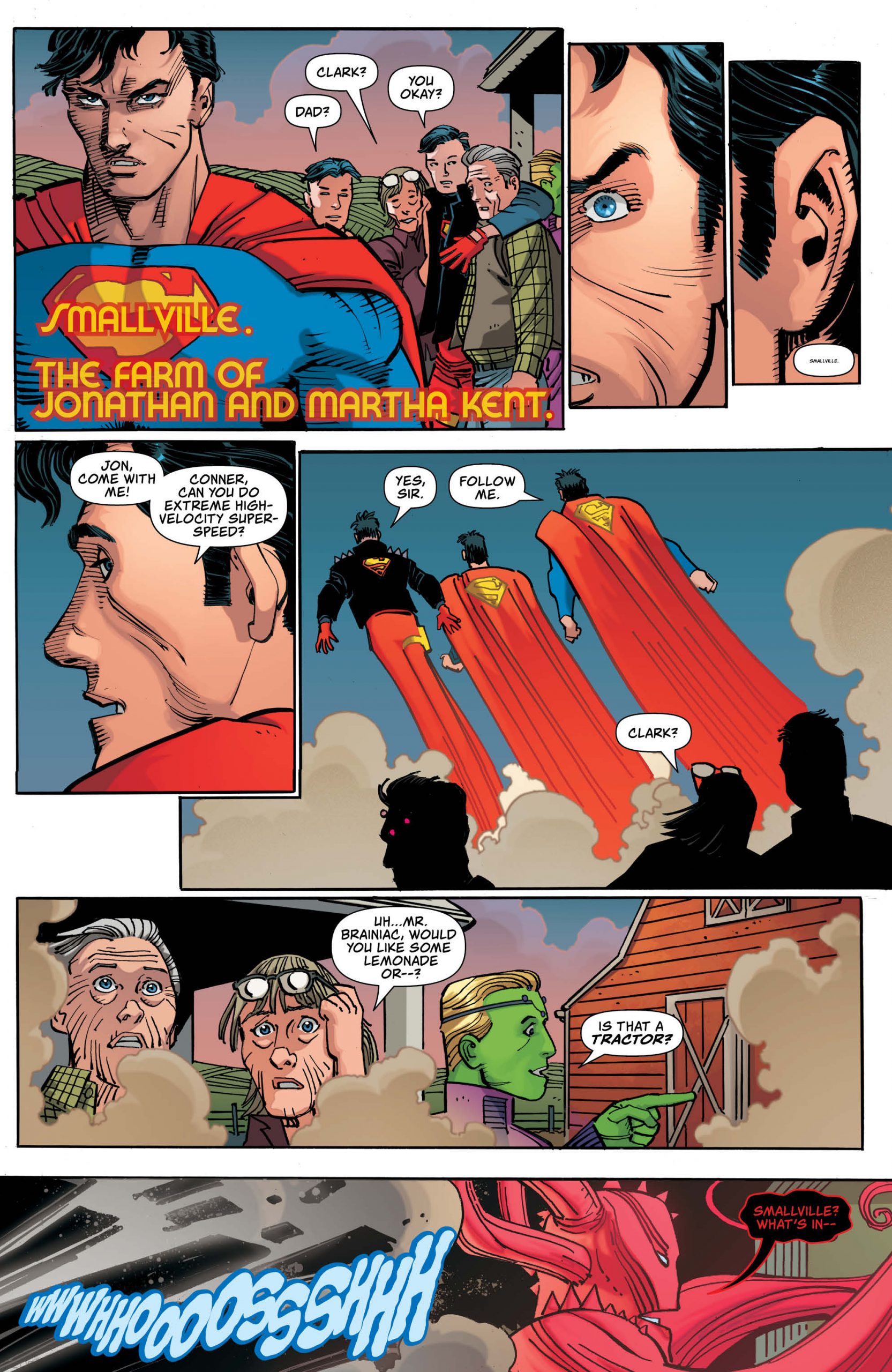 The art this issue is an odd step backwards from last issue.  Although, it is an improvement on Action Comics #1021. it’s clear that Danny Miki does a much better job at interpreting Romita’s pencils than Klaus Janson.  It’s a very strange situation, and I’m not really sure what to make of it, considering Janson’s experience.

While the majority of page space in Action Comics #1023 is more or less enjoyable with the extended Kent family facing a problem together and the Invisible Mafia getting much needed exposure, the issue really falls flat as the Red Cloud lacks any real depth and Superman’s actions at the end of the issue just don’t fit the character we.  Two years into Bendis’s run, this is probably about the best one can hope for.  The title is too mired in erratic characterization and overextended storylines that don’t always have a satisfying payoff.  There are moments, but they hold little depth.