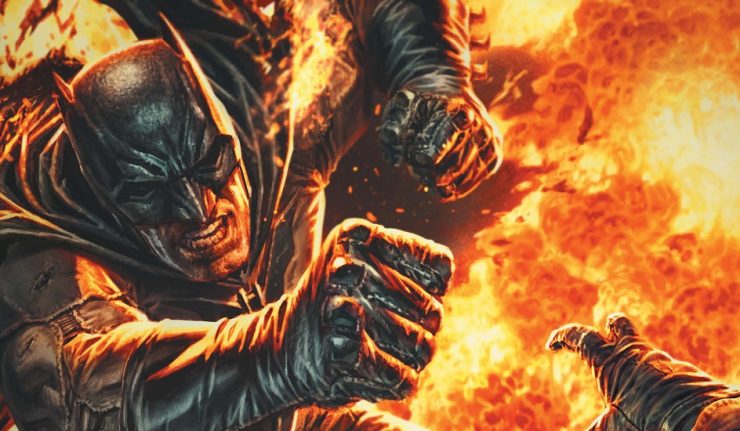 It’s the finale of the latest trial of Harvey Dent, as Batman and Two-Face team up to stop the Joker from his current attempt at destroying Gotham.  It all leads into “The Joker War” over in Batman, but you don’t need that event to enjoy this story!

It’s a horse I’ve flogged to death, but Tomasi’s Batman is a quintessential take on the Dark Knight that manages to evoke all the classic elements of the character, yet continue to push him forward and maintain a contemporary relevance.  Just like last issue, the inclusion of Lincoln March keeps Batman’s recent past in continuity, evoking the significance of Scott Snyder’s seminal work on the Caped Crusader in “The New 52.”

The human element that has been so central to this arc is Batman’s concern for Harvey Dent as a friend.  He has no illusions about Dent paying for his crimes, but he wants to help Harvey rid himself of the Two-Face persona.  The different approach to Two-Face in this arc continues to be a game-changer.  With the resolution depicting Harvey as a “jailhouse lawyer” trying to help others, it feels like Harvey may have turned the corner…or not.  James Robinson once told me at a convention that Two-Face is compelling because you have to maintain the sense that there’s always the feeling that he MAY be able to turn that corner.  But, then again…he may not be capable of it.  Tomasi teases just enough for us to believe that Dent is reformed…until the next time he relapses!

It may be a never ending push and pull for Harvey, but it is a psychological and humanistic dilemma that when handled correctly, delivers a great story.  For this arc, Tomasi and Walker make the reader believe that Dent is on the other side of things.  We want to believe that Harvey has conquered his demons.

I would like to direct everyone’s attention to the poster-worthy page in this issue, the final image on page 21.  However, while no one wants to see Batman taking one, page 7 is equally impressive.  Brad Walker chooses a unique camera angle and renders Batman in perspective perfectly.  Would you like a class on foreshortening? Well, it’s here!  There is a fantastic dynamism to the page as well, but it’s really the lesson in perspective that is so impressive.  With Detective Comics #1024, Walker shows that he is an artist with great technical skill,  able to illustrate the Dark Knight in an effective and exciting manner.

Matches Malone’s appearance at the end of the issue is another example of Tomasi using a classic Batman element that brings a smile to the reader’s face.  This is not a damaged psyche that dresses up as a creature of the night.  This is a man who after surviving trauma at a young age has overcome it and put the subsequent lessons to good use!  Matches Malone appears irregularly, but when he does, he is a reminder of the complexity of the Batman’s character.

Usually, having to sift through the Joker’s dialogue produces a headache, because the madman has trouble making sense.  However, this is the second issue in the story arc that the Joker has literally sung to me!  For whatever reason, Tomasi has referenced songs and albums in the Joker’s dialogue.  While not as many appear in this issue as in Detective Comics #1022, there are a few that caught my eye and brought a smile to my face.  When you read this issue, look for hands across the water, Kumbayah and Batman’s promises, promises quip.  I don’t think Batman using some of Mr. Freeze’s equipment necessarily means that Harvey is trapped under ice, but it does make one think.

It should be no surprise that the creative team led by Peter J. Tomasi and Brad Walker deliver a 5/5 review score.  Not only am I personally entertained by the musical references, this take on Batman is absolutely perfect.  And, it’s just another example in Tomasi’s run on Detective Comics.  Brad Walker isn’t always paired with Tomasi on this title, but Detective Comics #1024 reminds the reader that he should be.  This is Batman at his best.  Don’t be afraid to check it out!