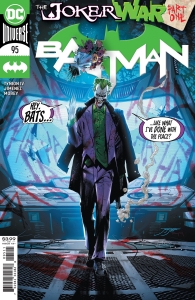 Batman #95: It was always going to come to this. The Clown Prince of Crime and the Dark Knight Detective go head-to-head for the last time. The Joker has never wanted to win before, he’s never wanted his battle with Batman to end, but now his motivation has shifted. He has decided that one way or another, this will be the final chapter to their story. “Joker War” begins here!

This issue marks the start of Tynion’s Joker War story arc, which DC has been hyping as the ultimate battle between the Dark Knight and the Clown Prince of Crime. And to underscore this, Tynion starts by taking us back to the their first clash in a flashback. What is especially fascinating is Bruce’s analysis of the Joker, which he relates to Alfred. He explains, “I’m the only other person in this world he thinks is alive, and because of that… I don’t know that this battle will ever end”.

It’s doubtful that the impending conflict between Batman and the Joker will be their last ever battle, it’s clear that this will be their biggest clash yet. We have known for a while that the Joker knows the secret identities of all of the Bat-Family. Last issue, he stole the Wayne fortune, and in Batman #95, the Joker takes control of Wayne Enterprises, with Lucius Fox under the control of Punchline. The Batman has to face his greatest foe shorn of his secrets, his money, and his closest allies.

Despite his recent death, Alfred maintains a major presence in Batman #95. First there is the discussion between him and Bruce about the Joker in the opening flashback. But later in the story, we find that he has left a surprise behind for Bruce. A shiny metallic blue Batsuit. Bruce is surprised to find this and Lucius denies having created it, so it must have been created by Alfred for Bruce. 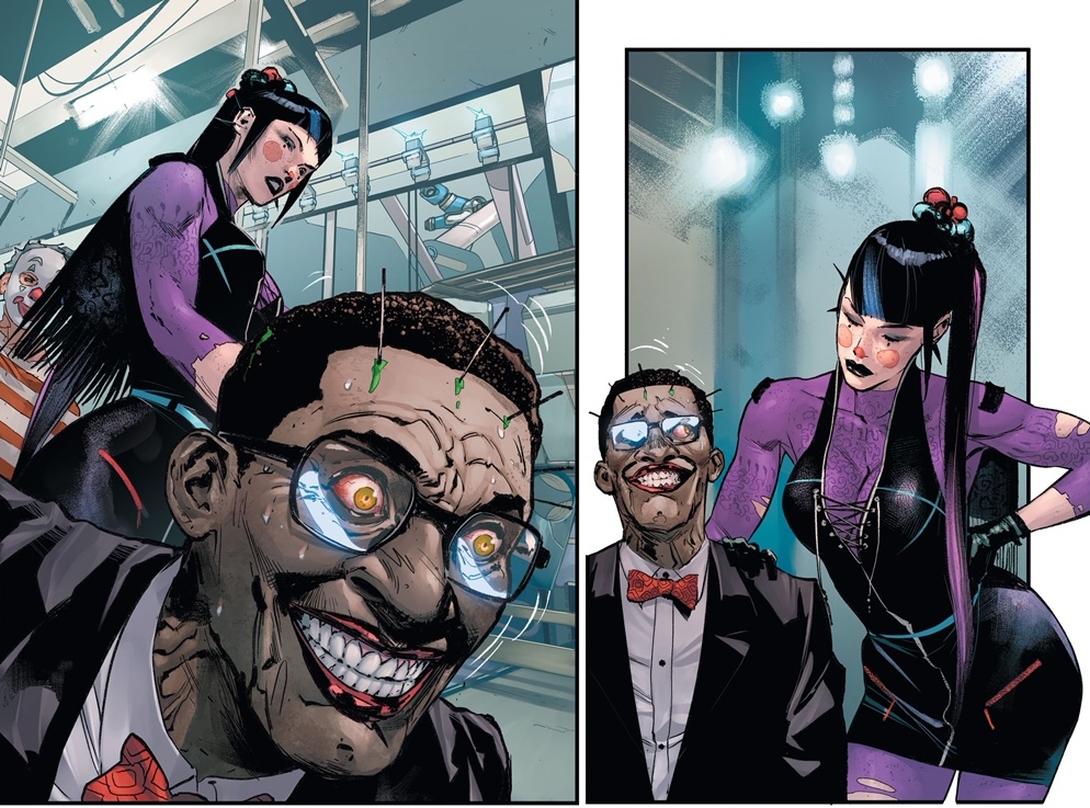 This Batsuit was recently shown on a preview of a variant cover of the upcoming Batman #100, and has been causing much speculation amongst Batman readers. I am guessing that this outfit was intended for Bruce to wear once he had established his vision of a new Gotham City. That would explain why it was stored in a secret “micro-cave” that was meant to be locked until the new Gotham had been built.

Alfred seems to appear once more, when Bruce hears Alfred speaking to him. On the surface, this appears to be due to the effects of Punchline’s poison gas on Batman, but could there be more to it? Might Alfred be alive somehow, or might it be a recording or an artificial intelligence based on Alfred?

While Bruce is busy dealing with Punchline, the Joker is preparing for his inevitable face-to-face encounter with Batman. We see him making preparations at the Monarch Theatre in Crime Alley. He locates a particular film reel labelled “The Mark of Zorro”. All of this hints at Batman’s origin story. Clearly the Joker’s intends to strike to the very core of Bruce Wayne by using his tragic past to torment his foe.

I also found it interesting how Tynion uses the detail of the location’s name to reference how things are coming full circle. In Park Row, a character explains to the Joker “You know, they used to call this part of Park Row Crime Alley”, going on to explain how this part of town used to be a crime-ridden slum.

Longtime readers will recall that Park Row was the original name of the area before Thomas and Martha Wayne were killed there, and the neighbourhood deteriorated, gaining the name Crime Alley. But thanks to Batman working to clean up Gotham in both of his identities, it has emerged as Park Row again. But will the cycle continue, bringing it back to being Crime Alley?

Jorge Jimenez does a wonderful job with the art in this issue. The depiction of Batman scaling the side of the Wayne building was breathtaking. And I love the design of the Batmobile shown in this issue. I’d love to see more of this iteration of Batman’s famous vehicle.

The only quibble I have with the story is that no matter how much Tynion tries to build this up as the ultimate and final battle with the Joker, we all know that it can’t really be. Sooner or later, another writer will bring the Joker back for another encounter. There’s no way that DC would retire a high-profile character like the Joker permanently. It’s hard to believe this is the final battle between the two arch foes, when DC has already announced the upcoming Batman: Three Jokers mini.

Tynion has done a masterful job of setting up the ultimate showdown between Batman and the Joker. Batman is backed into a corner with no help and no resources, while the Joker has possession of his wealth, his tech, and his secrets. The next few months are going to be a wild and crazy ride for Batman readers.