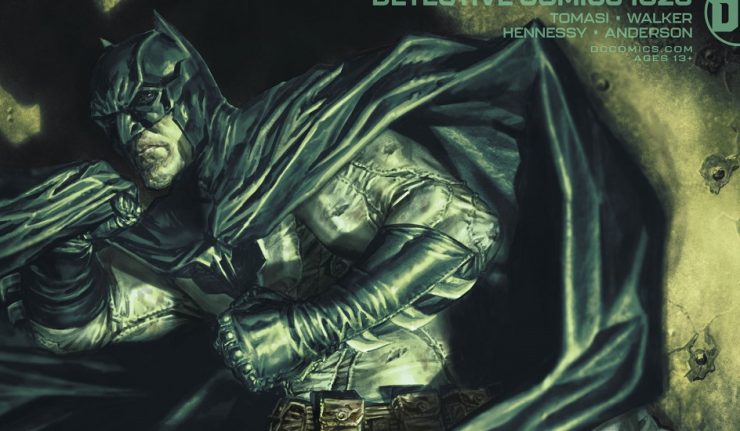 The Joker makes his next move to soften up Batman before unleashing “Joker War” on Gotham.  Meanwhile, Batman appears to finally “get through” to Harvey Dent just as the Joker’s Talon arrives.

There’s a real dynamism and intensity to Brad Walker and Andrew Hennessey’s art in Detective Comics #1023.  Walker’s figures echo the tension that Tomasi is building in the script, and there’s no shortage of drama when Batman finally connects with Harvey getting past the Joker’s mind control device.  Additionally, they opt for a particularly ghoulish depiction of the Clown Prince of Crime.  There’s no doubt that the Joker is literally, “no joke.”  This serves to amplify the Joker’s already demented plans and adds the requisite amount of unpredictability.

Tomasi’s script brings in some elements from Scott Snyder’s “New 52” Batman run, most notably the Court of Owls in the form of a Talon (not going to ruin the surprise) and the Batsuit worn by Jim Gordon when he took over for Batman in the “Superheavy” storyline.  This is a nice reminder that those stories are part of Batman’s experience especially since Tomasi’s run has produced a more classic and timeless feel.

Even though the current arc is a lead in to “Joker War,” Tomasi has managed to make it his own, not relying heavily on what’s going on in Batman.  Even the Joker’s machinations seem unrelated to the events in Batman’s other title.  Too often, a major crossover event can feel too large and cumbersome.  This arc continues to feel self-contained and not driven by events in another book.  The build up here to next issue’s conclusion develops its own sense of importance and anticipation.

It’s tough to find a negative in Detective Comics #1023.  If anything, it seems to be competing with Batman on some level as both storylines feature the Joker manipulating a large cast of villains in a grand scheme to take down Batman…permanently?  This creates a little awkwardness as the reader almost feels like he/she should be choosing which Joker story is better…..  What’s going on in Batman definitely appears to be getting the hype and spotlight and comes off as an event.  The arc in Detective Comics is more intimate reads more like a story even though it features a large cast.  Both are valid approaches, but it is a bit difficult to figure out how the two arcs fit together.  It seems like what’s going on in Detective has to come before what happens in Batman.  It wouldn’t matter so much except that they both feature the Joker prominently and are clearly linked in some unclear way.

The surprises in this issue are well placed reminders of Batman’s recent history and serve to connect these events to a run which has had such a classic tone and feel.  Detective Comics #1023 is exactly what you expect from Tomasi, Walker & company.  Not only is it still character centered with Batman’s commitment to helping Harvey Dent, the intensity that comes through is palpable.