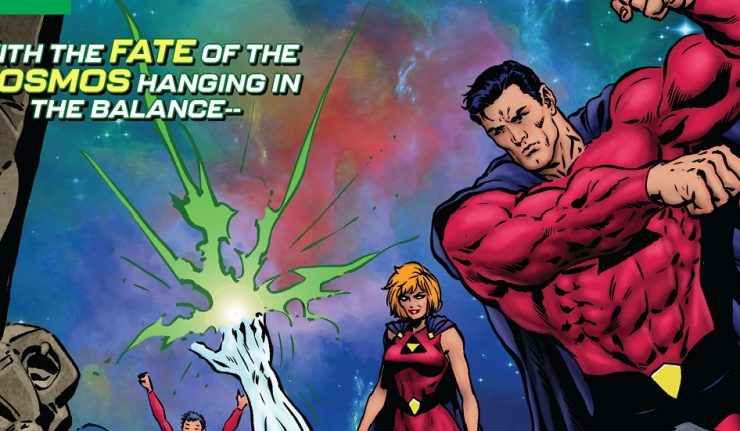 Hal Jordan faces the Hyper-family and Hyper-Man himself.  But, can Hal survive when his ring is damaged and he’s facing a foe with the powers of Superman?

Throughout his run on The Green Lantern, Liam Sharp has shown influences from different artists, most notably those associated with EC Comics in the 1950’s such as Wally Wood.  The Green Lantern: Season Two #5 sees Sharp homaging “The King,” himself, Jack Kirby!   There are some marvelous panels that recall Kirby’s work wonderfully, even down to the use of Ben Day Dots.  Additionally, it’s a perfect choice to portray a wild outer-space locale that one may have seen in Kirby’s work on the New Gods or Fantastic Four.  As great as Sharp has been on this series, he demonstrates here that he has even more tools in his bag!

The tone of this issue is an interesting one.  While clearly Hyper-Man is a Superman analogue, it’s hard to tell what his purpose in the story is.  As the issue progresses, Morrison begins to use him as a way of exploring Superman.  It’s not full on, but the tease promises something different.  The standout character is Hyper-Man’s wife.  Her characterization is part of this exploration and she promises to provide an interesting perspective on having a super-powered husband.

She lays a beat down on her husband that begs to be explored further.  While this is much more suited to a Superman comic, it is the single strongest moment in the issue.

Before Morrison uses Hyper-Man to potentially explore the Man of Steel, the portrayal of Hyper-Man comes across more as parody.  It feels awkward at first, but gives way about half way through the issue.  This unevenness is the biggest drawback to the issue.  It affects the issue in two ways.  Initially, it feels clunky, and finally feels unrealized.  It’s clear that Morrison has a bigger idea for Hyper-Man, but it doesn’t feel complete.  As mentioned above, Hyper-Man’s wife seems poised to take the spotlight and it’s significant that she isn’t utilized further.  The nature of this series so far indicates we may not get to revisit the character in the title.

Liam Sharp’s art holds this issue together as Morrison’s script isn’t quite balanced.  Sharp’s homage to Jack Kirby fits perfectly and is a joy to behold.  The potential in Morrison’s story causes it to be more disappointing in what is lacking rather than fulfilling with what is there.  It could be so much more.  There’s still a lot more to come in The Green Lantern: Season Two, but at nearly the halfway point,  the series should be heading somewhere with a more obvious purpose.