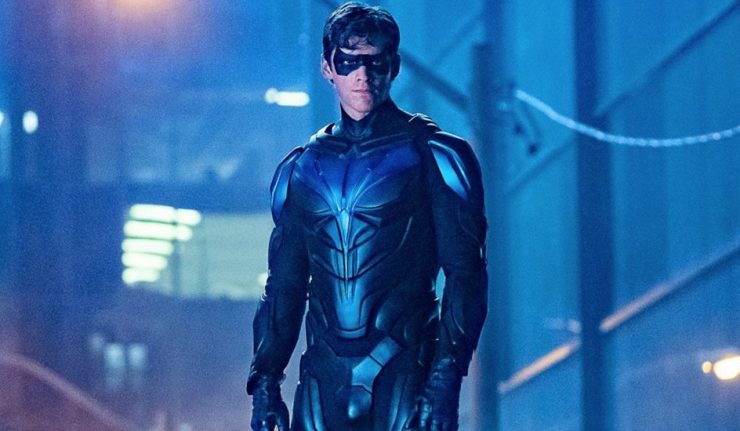 While we wait for news about a production start date on Titans Season Three, actor Brenton Thwaites revealed a bit about some upcoming changes to Nightwing’s costume.

“We pitched a few ideas to change the suit in a way that we can still use the outline of the original suit because they are so time-consuming and expensive to make. It’s better for us to enhance the one we’ve already got. We’re working on different ways for Nightwing to have more gadgets.”

In a 2019 interview with Collider, Thwaites discussed the character’s evolution from Robin to Nightwing:

“When I signed onto this, in an early meeting, they were telling me in the first season, it would be about the transition of Dick becoming Nightwing. That’s where all that training came from, in the preparation that I would become Nightwing. But, the way the story had it, we had other elements to deal with, so we went down a different path. The whole time I was very anxious to read the pages of what the story and the journey of Dick growing into Nightwing would be.”

The actor also contrasted Nightwing with the show’s number one villain:

“For a number of reasons, it provides an opportunity for a character to realize his potential as a superhero. When that happens, we feel a sense of confidence watching it. We know we have a leader who is going to win every single time on the screen. But what it also does is gives us an amazing opportunity to build up the power of Deathstroke. We spent a lot of energy and time explaining to the audience how dangerous and serious this villain is. I feel it was worth putting that time on the screen and teasing to the audience that this bad guy can only be put down by another intense superhero, which we all know is Nightwing.”

Other than the suit tidbit, the only other recent Titans news was about Barbara Gordon joining the cast of characters. Stay tuned for further developments.