SDCC 2020: Snyder & Capullo Go In Depth On The Robin King 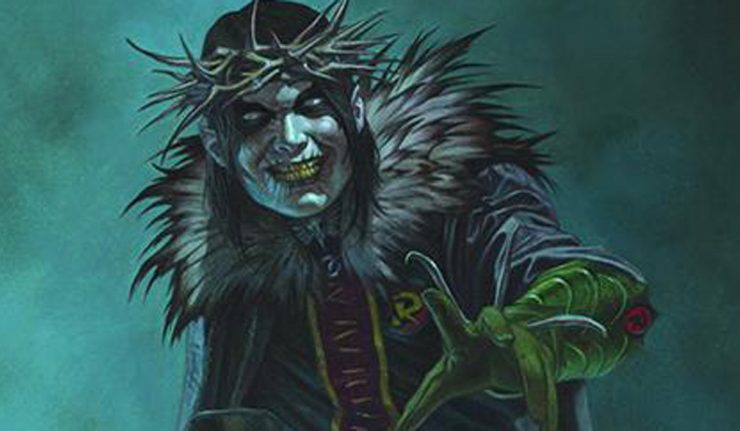 The Robin King was mentioned during the Day 2 panel of DC @ Home with artwork by Greg Capullo. Writer Scott Snyder and Capullo talked a little bit about how fun it is to create such an evil character.

All Hail The Newborn Robin King

During their virtual panel for Comic Con, Snyder and Capullo were talking extensively about Dark Knights: Death Metal. Among other things, when Snyder began to tease twisted take on Robin, Capullo quickly showed off some sketches he had done of the character.

If you look at the YouTube video below and click towards 17:39 of the video to get a good look.

The Boy Wonder No More

One of the really interesting aspects of the character according to the creators is how despicable his actions are. The creators mentioned how in this ‘Darkverse’, this Robin exhumed the body of The Flash. Once he had the body in his possession, he taunted Barry Allen with it.

Another story they shared was how the Alan Scott version of Green Lantern had two kids. Not only were their bodies defiled but they were turned into dust and packed into a Black Lantern ring!

When the series editor Marie Javins asked them about such actions, Snyder and Capullo felt that it was necessary for the story. In their mind, the more evil you make the character, the more harrowing and necessary it becomes for the heroes to overcome them.

It should come as no surprise to the DC Faithful that Snyder and Capullo make a great team. It wasn’t like that in the beginning when Snyder had a more hands on approach to paneling which perturbed Capullo. However since then, they have become one of the best creative teams in all of comics.

For Snyder, he loves to come up with whatever his mind can come up with because he know that Capullo can deliver. Snyder had no issue coming up with a disturbing portrayal of Dr. Manhattan because he knew Capullo would meet the challenge.

Here’s hoping for many more collaboration from these two.