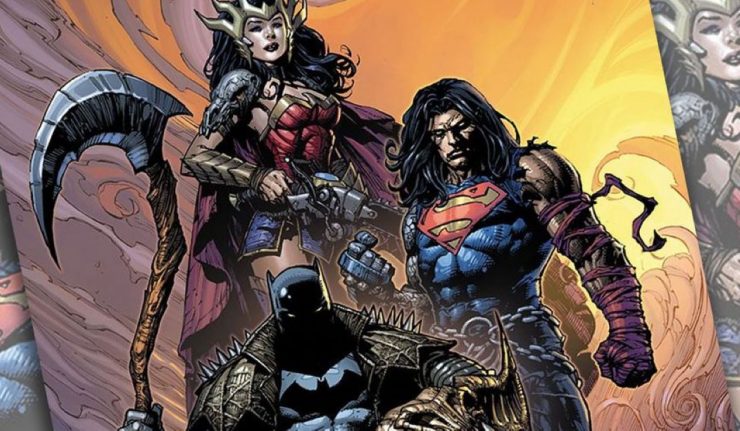 Their Very Own Stonehenge

During [email protected] Day 2 panel. The masterminds behind Dark Knights: Metal and the DC ‘Darkverse’ talked about their newest passion project.

For Snyder and Capullo, Dark Knights: Death Metal represents an opportunity to return to a world they both love a great deal. This sequel to the critically acclaimed Metal series gives the team the chance to really step it up.

Turning It Up To Eleven

As of SDCC, DK: Death Metal is currently about to release it’s third issue but Snyder had some things to say about the first issue. Snyder believes that this new series will be one that both new readers and long time fans will thoroughly enjoy. The classic trope of overcoming adversity through unity will be on full display in this series.

Without getting too deep into spoilers, the first issue has a tremendous setup in the fact that the Batman Who Laughs has literally reshaped the world. As the newly established leader of this world, it’s up to Wonder Woman and a desiccated Swamp Thing to begin the rebellion and assemble a team of heroes.

For artist Greg Capullo, the return to the Darkverse gives him the opportunity to draw some really outlandish visuals. For example, fans can expect to see a Batman-inspired monster truck plus some really garish characters.

During the panel it was revealed that one of the more evil creations is the one called The Robin King. Although there was no official materials on display, Capullo did hold up a sketch of the character. The character was holding a severed head.

Alongside the main series, fans can expect the standard one-shots and supplemental issues. Snyder did caution by saying that the supplements only enhance the experience of Dark Knights: Death Metal. The issues are great in their own right but are not essential to following along the story.

Snyder also mentioned how he’s inviting many different creators to be a part of Death Metal. DC greats James Tynion IV and Joshua Williamson will be lending a hand on some issues. Other names include: Garth Ennis, Becky Cloonan, Chip Zdarsky, and Chris Priest.

Check out this segment plus the rest of the panel in this video below.