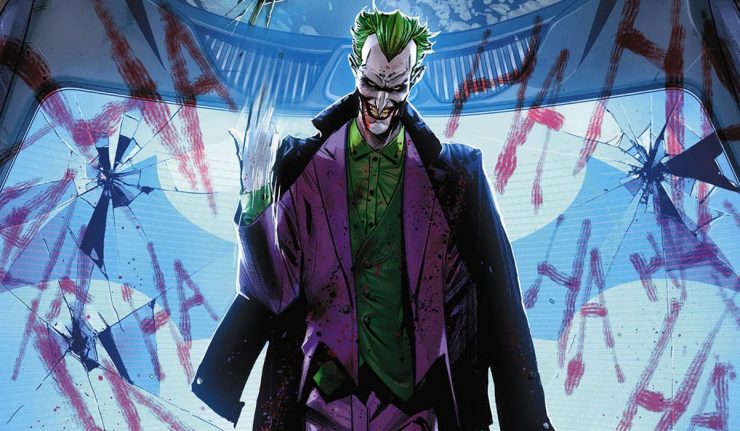 Joker War architect James Tynion IV was joined by fellow creators Jorge Jimenez, Cecil Castellucci, and Dan Jurgens to discuss the latest DC big event. The panel discussed how the events of Joker War will have an impact on the rest of the Bat family.

The Joker War segment was the first part of the [email protected] panel at the virtual San Diego Comic Con. The panel was moderated by Batman group editor Ben Abernathy and began first with Tynion and Jimenez.

During this initial segment, Tynion talked about how the genesis for the event began back in December of 2019. What was originally scheduled to be a main storyline for the Batman title, quickly turned into a big event.

It grew to such a big event that this storyline will now cover a host of different Batman family titles. Tynion realized that this “Joker element, this story, that we’ve been building was going to be blown up into a full event-sized story”.

This allowed Tynion to flesh out characters as well as introduce new ones such as Punchline.

When asked what it was like to be approached for Joker War, Jimenez was beyond ‘grateful’. For him, the opportunity and the more he heard about it, quickly helped him become excited about the project.

Joker War Throughout Other Titles

The panel was then joined by Batgirl writer Cecil Castellucci and Nightwing writer Dan Jurgens. Both creators expressed how their respective titles and characters will be changed forever.

For Castellucci, Joker War provides an opportunity for Batgirl to confront that terrible memory of what Joker did to her. Castellucci believes that the events will allow Gordon to “reclaim that moment” and become empowered by it.

Jurgens on the other hand, sees the events differently. This event acts as a way for Dick Grayson to reclaim a part of himself that has been lost due to his amnesia. The question remains what Nightwing will be like after this is all said and done.

With all that said, this big event continues to march on nicely and makes for some great reading material as you stay home folks.

Check out this segment, alongside others, in the video below.