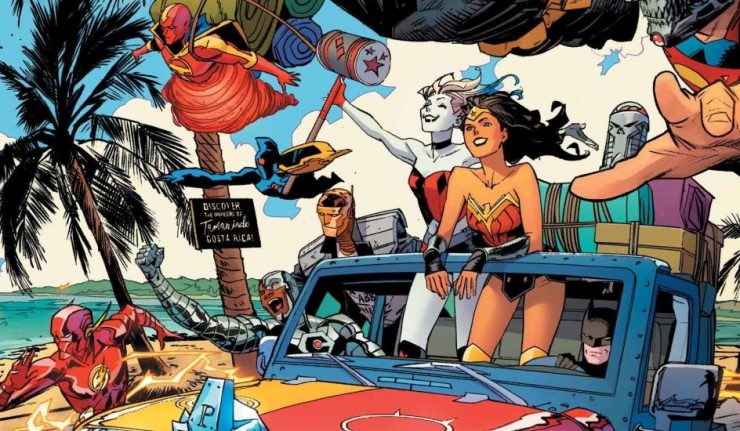 DC Cybernetic Summer #1: Rub some sunscreen on your circuits, because DC’s favorite cyborgs are hitting the beach in DC Cybernetic Summer on July 28! In this sizzling summertime anthology special, Harley Quinn and Sy Borgman conquer a truly titanic water slide, Cyborg, Superman, and Cyborg Superman find it difficult to have a conversation, much less a fight, and Batman tries everything to escape a summer cookout—even taking on the omnipotent Brother Eye and his newly infectious O.M.A.C.s!

And it’s not just the cyborgs hitting the surf! Flashes from across the multiverse gather for a race to claim the fastest Flash in the multiverse! Mercury Flash from Earth-44 is out to win it all this year, the only person standing in his way is…Barry Allen! And Red Tornado’s on a camping trip with his wife Kathy and his daughter Traya, but he’s distracted by Justice League matters! When a threat emerges, will Red Tornado be able to protect his family?

This year’s summer anthology has a tech-based them, focusing on DC’s robots, androids, artificial intelligences, and cyborgs, Superman, Batman, Wonder Woman, and even Harley Quinn all make appearances.

As is fitting for a “summer fun” anthology, the stories are all light in tone. There is some serious adventuring, but most of the stories are at least slightly humorous in tone. The most glaring example is probably the Booster Gold and Blue Beetle story which clearly demonstrates why Booster is the last person in the DCU that should have been ever trusted with a time machine.

Also, none of the stories are entrenched in any ongoing storylines. For instance, you don’t have to be following Williamson’s run on The Flash to get what’s going on in his Flash story here. Nor do you have to know the current membership of the Justice League or what happened in the last issue of Death Metal. All ten stories are entirely self-contained.

I found all of the stories quite entertaining, but  few stood out to me as particularly noteworthy.

For Legion fans, there is a rare treat. A new Superboy and the Legion pf Super-Heroes tale set in the Silver Age. While the focus is on one of Clark’s Superboy robots, it still gives us a nice look back at a bygone era of comics. Unfortunately, only Lightning Lad, Saturn Girl, and Brainiac 5 are present for the story, it’s still nice to get this glimpse of the Legion’s original incarnation. I would really love to see this creative team tackle a longer story featuring the full team. Maybe DC should consider a Silver Age Legion miniseries.

I also liked the Red Tornado series. It’s been a while since we’ve seen much of Reddy in the DCU. And I especially like that he gets to spend some quality time with his family. It’s good to see him learning an important lesson on his quest to be more human.

I was happy to see the return of Midnighter and Apollo to the DCU. The two heroes stop Monsieur Mallah from liberating the Brain from imprisonment. However, the pair learn that the villains are in love and just want to be together. Mallah pleas with them, telling them that “we cannot help who we love”, and finds the superhero couple sympathetic to their plight.

Joshua Williamson provides a cute little tale in which he reveals that once a year, the Flashes of the Multiverse hold races to determine who the fastest Flash of them all. This year’s final race is down to Barry Allen of the main DCU and Mercury Flash from Earth-44. Mercury Flash is a mashup of the Flash with Mercury of the Metal Men, having the former’s speed, but the latter’s personality. Typically, Barry tries to make friends, but this is rebuffed by the angry robot. During the course of the race, however, Mercury Flash learns an important lesson: “It’s not your speed that makes you a Flash… It’s your heart. And that is a Flash Fact!”. And this realization is the true victory in this contest.

This is a strange, but funny little story. But my favourite bit is how it reveals the sense of humour that a certain grim and serious DC character usually keeps hidden. It’s nice to see this character having a lighter moment for once.

And fans of Doom Patrol, whether the comic or the TV show, should enjoy the Robotman story. This tale involves Cliff and an old friend try to spend a fun summer day together. Unfortunately, a human’s idea of fun and a cyborg’s are very different. But they do find one activity that they can bond over: reading comics. And so, the final story ends with a moral that sums up all the stories in this special: “A summer without comics ain’t no summer at all”.

The only problem I have with this book is that it stands as a reminder of how many of these characters are overdue their own titles, either ongoing or mini. I would especially love to see an Apollo and Midnighter or a Red Tornado book. C’mon DC, it’s long past time we got a Blue and Gold miniseries.

DC Cybernetic Summer is a whole lot of fun. It’s a title that can be enjoyed by hardcore DC fans and casual readers. It could even be used to entice new readers, so if you know someone you want to get into reading comics, maybe pick up an extra copy for them.