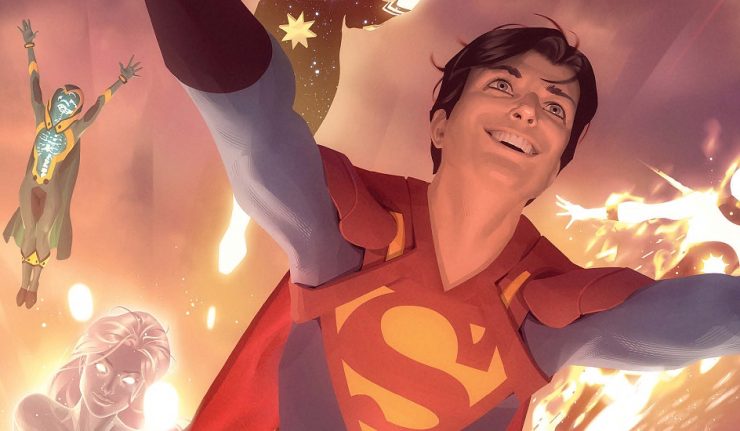 After meeting with the United Planets Council and President Brande, the Legion of Super-Heroes elects a new leader!

It’s really hard to find a true “positive” in Legion of Super-Heroes #7.  Unfortunately, the bits that start positive tend to slide into negative territory.  However, Triplicate Girl’s dialogue has an interesting affectation in which she refers to herself with first person singular and first person plural pronouns.  This reveals something about how she sees herself and how she sees the world.  She also seems to be a bit of a humorous pessimist, or perhaps a realist.  No matter it’s the only narrative aspect that didn’t downturn into something negative.

The art is solid from Stephen Byrne after Sook and Von Grawbadger’s page one intro with Wildfire.  Byrne fits the look of the title and Jordie Bellaire’s colors maintain a consistent appearance no matter who’s handling the penciling and inking chores.

Bendis does make a solid attempt at addressing the myriad of alien races that constitute the Legion and U.P. as he has Rokk recognize a diversity of communication methods.  He follows up on this later as he shows Chameleon Boy questioning things like “appendage,” demonstrating his experience is very different.  There could easily be a whole issue or arc devoted to this.  It would fit in well with current events in the United States.

This theme also underlies the argument between Rokk and Imra.  And, with further exploration could be a significant positive aspect to this iteration of the Legion of Super-Heroes.  As it is in Legion of Super-Heroes #7, it remains another element worthy of more development.  But, one wonders if it will get its due.

The first negative in this issue sort of leans into last issue’s finale of the title’s inaugural story arc.  Legion of Super-Heroes #7 opens with Wildfire recapping not only his backstory, but also recapping the previous story arc featuring the recovery of Aquaman’s trident.   Oddly the recap of the recovery of Aquaman’s trident sounds more interesting and exciting than it actually played out.  It sounds like something one would want to go back and read, but having already read it, I know it not to be true.   It’s not simply decompressed storytelling that’s hurt the execution, it’s too many ideas squeezed in to a storyline.  The story doesn’t have time to breathe because it’s being crushed by other elements that don’t necessarily contribute positively to the story arc.  There’s a place for those elements, but they don’t serve the story in any way.

This issue’s “story” begins with the Legion address the United Planets.  The reader is expecting this to be a showdown of sorts between the Legion and President Brande.  It bogs down quickly with dialogue.  It’s not that it isn’t pertinent; it’s just too much again.  And then, just as it begins to get interesting it ends abruptly once Jon says what he has to say.  It make’s President Brande’s stance appear to have no solid foundation.  It does create some potential mystery surrounding how Jon is viewed in the future, but again, it doesn’t really go to creating a good story, it just ends the immediate conflict so Imra and Rokk can argue in the next scene.

The issue continues sluggishly, and instead of the story progressing, the whole middle section of the issue is devoted to an argument between Rokk and Imra that leads to an impromptu vote on the leader of the Legion.  Apparently, there’s never been a proper vote before and NOW that they have a full Legion….  This seems like new information.  The first 6 issues of the series did not feel like a membership drive, yet now that seems to be what was happening.  And, what constitutes a “full” Legion?  Not only does this sequence completely derail the larger storyline, it also short-changes the first vote of a new Legion leader.  There’s no build up, no tension, it happens so quickly and unexpected it feels thrown in like an afterthought.

It’s clear that Bendis is trying to create some personalities and conflicts between Legion members to make this feel genuine, but it’s too much at once.  None of the characterization is endearing.  It’s almost as if Bendis is trying too hard.  He hasn’t spent enough quality time to make the reader like the characters, and this debacle makes me not like anyone.  Tripilicate Girl’s dialogue when she’s talking to Monster Boy is much more effective as it communicates in a more subtle manner while still revealing aspects of her character.

There are no complaints on the art in Legion of Super-Heroes #7, despite Sook not being able to keep up with a monthly schedule.  Byrne fills in admirably and Bellaire’s colors hold it all together.  Unfortunately, Bendis just keeps adding elements that don’t progress the narrative.  Much like issues #4 and #5 which told the origin of the Legion, the Legion leader vote in this issue detracts from the story arc.  There’s a real lack of narrative flow.  The constant barrage of ideas without satisfactory explanation don’t serve the story effectively.  It’s like a movie with good scenes assembled terribly.  It really appears that it’s too much for Bendis to manage.  Some streamlining would do wonders for this series. 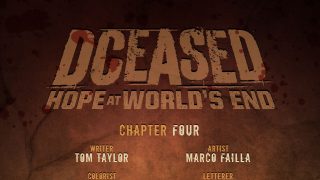