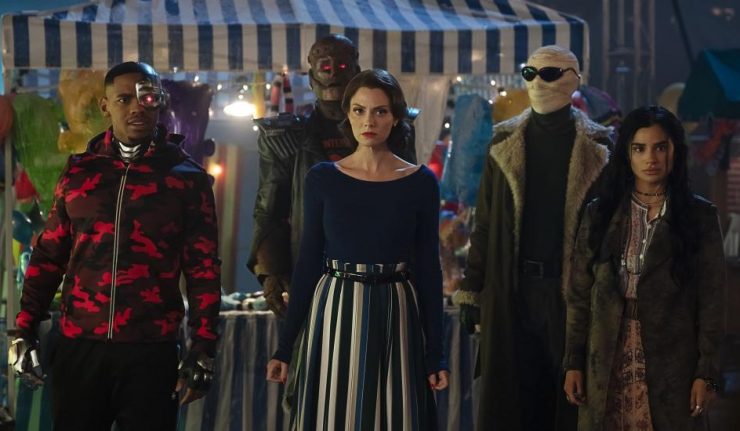 Doom Patrol 2×09 – “Wax Patrol“: Before they can save the world from The Candlemaker in the season two finale, the Doom Patrol must first confront their childhood imaginary friends.  Meanwhile, Jane reflects on the first time that Miranda became “primary,” and Dorothy must make a fateful choice.

In the second season finale, the Doom Patrol are pitted against the Candlemaker, who will wipe out humanity if left unchecked. But while the team faces this threat, Jane relives the memories of the Miranda’s downfall that led to Jane taking her place as primary.

The Candlemaker pits each member of the team against their imaginary friends. Well, with two notable exceptions. First, Larry tells his teammates that he never had an imaginary friend. This appears to protect him from being psychologically manipulated by the Candlemaker, but not invulnerable to a direct attack, and we see Larry immediately immobilized in a wax – the eventual fate of his teammates.

The other exception is Miranda, who is Crazy Jane’s primary personality. This seems to be due to her being summoned to the underground by the other personalities. They have noticed Jane’s absence and are growing suspicious of Miranda. It appears that “Miranda” is an impostor, as Jane finds the remains of the real Miranda still in the well. Kay (a.k.a. “the girl”) realizes that she is an impostor as well, and demands of her, “Then who are you?”. Unfortunately, the answer to this important question will have to wait until next season.

The imaginary friends of the rest of the team seem somewhat silly on the surface, but they all reveal something tragic about each teammate. For each of them, their choice of imaginary friend is the result of their relationship with one of their parents.

Rita’s imaginary friend Mlle. Roxy was a paper figure made of elements cut out from various photos and drawings. Roxy tells Rita that she is “all the things you aspire to”. Rita confesses that Roxy’s eyes came from a photo of Rita’s mother.

However, after seeing her mother having sex to get Rita a role, Rita could no longer bear to look at Roxy and disposed of her paper friend. Roxy now reveals Rita’s tragic secret – that she had become just like her mother: “Desperate, willing to to do anything to get the next role”.

It is especially telling that Vic’s imaginary friend, Doctor Cowboy, is played by Phil Morris, the same actor that plays his father, Silas Stone. Where Silas is judgemental and disapproving. However, Vic dreamt up Doctor Cowboy as a father figure that gave him the affirmation that Silas withheld. As he explains to Vic, “I’m here to pat you on the back and say ‘Yeehaw!'”. He then turns on Vic saying, “You’ll always be that pathetic little boy looking for validation”.

Cliff’s imaginary friend was Jesus Christ, which may get some religious people riled up about the implication that Jesus is imaginary. However, it’s important to note that this isn’t the real person/deity, but a six year old Cliff’s interpretation of Jesus. Despite, Cliff’s expectation that Jesus is “supposed to be all about peace and shit”. Jesus is angry at being abandoned by Cliff and lays a brutal beating on him.

Cliff’s choice of imaginary friend arose from him being sent to Bible camp when he was six, while his parents were in the course of splitting up. Cliff imagined Jesus as a friend to fill the void left by his father. When his father came back into his life temporarily, Cliff abandoned Jesus.

Cliff’s imaginary friend being Jesus allows for some of Doom Patrol‘s signature absurd comedy. I was especially amused when Jesus takes His own name in vain. Cliff then responds, “Can You do that? Take Your name in vain? Do you get some sort of pass?”.

Cliff and Jesus appear to make their peace, with Cliff noting that Jesus always forgives. Jesus replies, “Yeah. Unfortunately for you, I’m not Jesus”, and proceeds to literally dismantle Cliff. Each of these final lines from the imaginary friends are dubbed over in the voice of the Candlemaker, immediately before enveloping each member of the team in wax.

I was also amused by Willoughby Kipling’s imaginary friend being Punch from “Punch and Judy” puppet shows. This leads to Willoughby receiving a beating in the manner of these shows. Kipling responds to Rita’s incredulity by telling her, “It was the 15th Century. We didn’t have Bugs c*nting Bunny”.

I also have to praise the music selections accompanying Jane’s visions of Miranda’s past. The songs are very evocative of the time period of each vision and set the appropriate mood for each scene. I was especially impressed by the aptness of Gordon Lightfoot’s “If You Could Read My Mind”. The line “Just like an old time movie/ about a ghost in a wishing well” perfectly fit Jane being a disembodied personality floating in a well. The lines “And I will never be set free/ as long as I’m a ghost that you can’t see” are especially chilling.

Unfortunately, due to the pandemic, this season of Doom Patrol was truncated to nine episodes, making “Wax Patrol” the season finale. Unfortunately, this has caused the season to end on a cliffhanger. Thus we will have to wait for Season Three to see the resolution of this story.

I’m not a big fan of shows using cliffhangers as an attempt to make sure viewers come back for the next season. It seems underhanded and a disrespectful way to treat your audience. Plus, it runs the risk of an unplanned cancellation of the show leaving viewers without any closure. But, I won’t hold this particular cliffhanger against the creators of the show, as they did not intend this to be the finale, but were compelled to do so by forces outside their control.

“Wax Patrol” marks the end of Doom Patrol‘s second season. It will be a long and hard wait for Season Three. However, the gap gives an ideal opportunity to rewatch the first two seasons. Season Two has proven to be every bit as enjoyable as the first. Doom Patrol remains the best show currently on television.