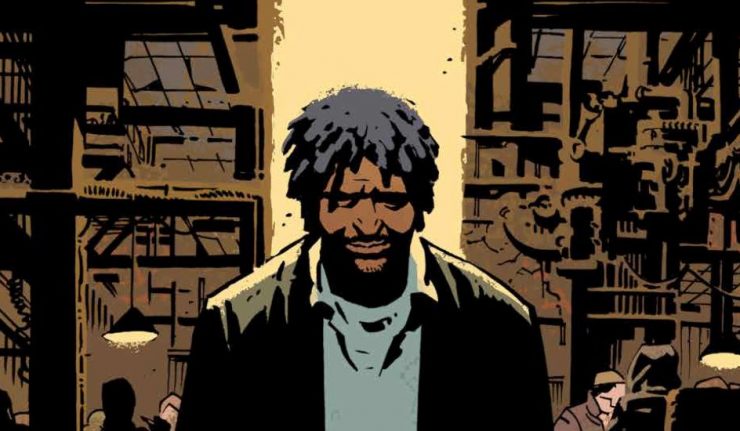 COLLECTING THE OFFICIAL SEQUELS TO THE HIT TV SERIES & FILM!

Buckle in, the praise for Firefly Legacy Deluxe Edition is about to get effusive. First and foremost, The Shepherd’s Tale is maybe the best piece of comicbookery to come out of entire verse. Zack Whedon’s commentary afterward explains it all. Do not skip it. The think about Book is that we all knew there was something, or lots of somethings, about him that we never really understood and this epic, beautiful masterpiece of a story tells us everything we need to know. Done in reverse order from his shocking death in the movie Serenity, to his time as a young child, we feel heartbreak, shock and understanding all at the same time. Masterfully drawn by Chris Samnee and inked by Eisner winner Dave Stewart, we do not feel cheated that we never got to see this story on film, because it is cinematic.

Each story in this epic has something going for it. Regardless of who your favorite character is, there is a moment of praise and love given to each of that one. Even Simon, everyone’s least favorite character (admit it), shines in this series. Float out, written by actor, comedian, nerd extraordinaire, Patton Oswalt genuinely brought a tear (or many tears) to my eye. Wash gets the send off he deserves. The follow up, Leaves on the Wind, which tells the story of the birth of Wash and Zoe’s child is just as touching, but because it is a traditional Firefly story, it looses some of the punch.

The art in this series ranges wide without a doubt, but it is all excellent. There was never one panel where I felt something was done poorly. Of course, I like some of it better than others, but at the end of the book, I felt satisfied.

A HUGE shout out to letterer Michael Heisler who is the only person credited. It is a testament to his incredible work. He has to add in Chinese swear words into the text all the gorram time. It flows without interruption. He actually makes readers feel like they are hearing the words spoken.

If Firefly Legacy Deluxe Edition has any drawbacks, I simply can’t find one. Sure, not every story is as good as the others. Sure, not every artist’s rendering is just what each reader wants to see, but as a whole, this is a perfect love letter and I can not fault it.

Firefly Legacy Deluxe Edition is everything that fans of the show want it to be. The jokes are hysterical. The sad moments are really sad. The chemistry between the characters feels just as real as it did when the amazing actors played them. The touching intro by Nathan Fillion is heartfelt and perfect. This 600 plus page tome is a must for anyone who loved Firefly and who wants to get lost in the verse over and over. Just like I watch the series and the movie once a year, I will be reading this once a year for as long as I can read.