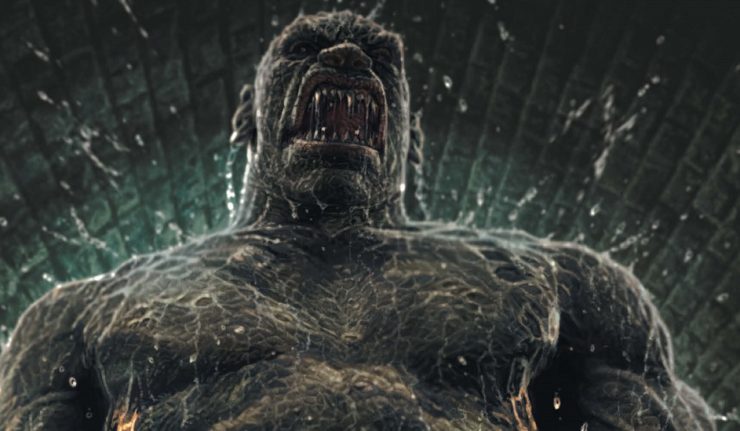 On the outskirts of “Joker War,” Batman comes face to face with Killer Croc and his current crew.  Batman makes a play to  save them all from a toxic chemical brew in the sewers under Gotham City.

It’s pretty simple, really.  Peter Tomasi understands character, and the importance of character in a story.  It’s not the “event” or the  “conflagration” that matter, but rather the people.  Killer Croc has more or less always had a sympathetic angle to his portrayal.  In Detective Comics #1026, Tomasi plays that angle for all it’s worth as Batman sees the human behind the monster(s) and seeks to save them all from a perilous situation.

Tomasi does an excellent job of drawing in the reader to the intimate abode of Croc and his minions, leaving the Joker’s machinations far away.  Batman clearly cares about the people in peril, despite their apparent allegiance to crime, though not necessarily the Joker’s way.  It’s summed up stupendously on the last page of Detective Comics #1026 when Batman calls Croc by his given name, Waylon.  The moment is not lost on Croc and the scene reminds the reader of the humanity behind every criminal (except maybe the Joker….).

This type of story seems to draw directly on Will Eisner’s The Spirit.  Often, the Spirit would be a secondary or unconscious character in a story about human nature.  Despite the connection to the overly hyped “Joker War” in Batman, the tale in this issue is much more human and relatable than the overblown event.  There’s a real touching moment here, and it’s to Tomasi’s credit that he is willing and able to tell this type of story in the midst of the hoopla of the aforementioned event.  It’s the type of story that sneaks up on the reader and snatches the glory.  You will feel it move you in your heart.

When the single ancillary issue stands head and shoulders above the “event,” it’s hard to find a negative.

One might find events grander and more exciting, but there’s nothing more satisfying than a character focused issue that makes the reader think about a “villain” in a new way.  Often cast more as “misunderstood monster” than true villain, Killer Croc gets his moment in the spotlight with a bit of understanding from a truly humanistic Batman.  This Batman is the Batman who comes across as a caring human being trying to save others.  He’s not blinded by rage or vengeance, but rather directed by the notions of salvation and succor.  This Batman saves victims…and prevents further pain and anguish.