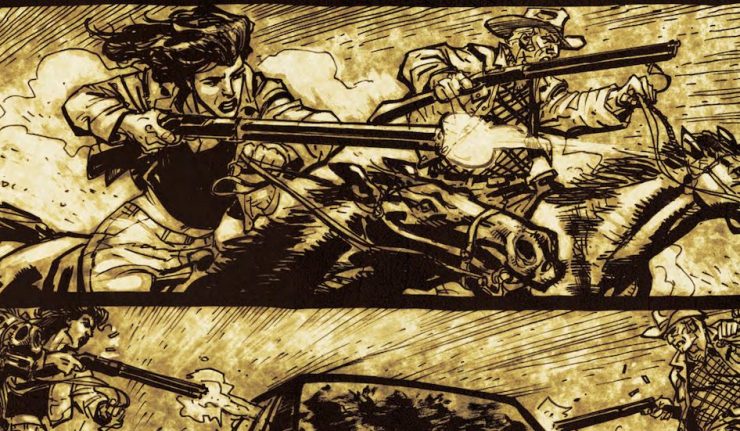 Three wild bank robbers decide to pull off one last job. There’s just one problem. The little bank they robbed is a drop point for the mob’s biannual money laundering. Now a salty old-timer named Cole will use every last trick in his bag to get his girl Justine and their legman Billy out of the mafia’s cross-hairs for good.

It all starts with the intro from a renowned nerd. Patton Oswalt introduces a not-too-distant but not-too-recent time when movies were fundamentally different. It was a time when the everyman actor — from comedians to artists — could become an action hero. But for Oswalt, there is only one example who epitomizes the era he is describing, and that man is Walter Matthau.

Matthau’s turns in one-last-hurrahs like The Taking of Pelham 123, Charley Varrick, and The Bad News Bears are the focus of Oswalt’s introduction. They are also masterpieces that reveal Matthau to be the king of small stakes according to Oswalt. And they set the tone for a series where the stakes, whether big or small and the people standing next to you are the only things worth still fighting.

This tone is matched by the yellows and oranges that could be mistaken for sepia-toned nostalgia if they weren’t so loaded with images that make the heart beat faster. It creates a new take on color and black and white. And the feeling like I remember movies from the 70s creating for me. Colors felt too bright and too ragged. Things felt rundown or running down. Like a barreling locomotive running out of steam but still chugging.

The mustard scheme grows on the reader. It draws the eye to the thick lines, layered and chunky, fine and thin, and used to brilliant effect in every panel and every image. The shadows are poignant. Silhouettes are mystical and creased lines are heavy with meaning and emotion.

Colors are like filters. They can recreate the expectations of the imagination and imprint a page with the tone of a feeling. Older things are often yellow. Old paper in a book. Teeth. Nails. Eyes. Age and poor health can yellow the finest surfaces. Time can tarnish the whitest pearls like oxidized silver. It’s the color of a brittle document that has not yet crumbled.

Cole is the coolest cucumber. Cooler than Klausen pickles pulled from an icebox. He is the perfect mix of charm, guts, sass, and gruff. No one likes him except the people who love him. And those are the only ones that Cole cares about.

The best part about Cole is that his story is mostly a mystery. The Wayback machine only rewinds to the moments when he first meets and seduces Justine and his first introduction to Bily. Everything else is undocumented. This means from the moment he appears on the page, there is only one version of Cole.

Justine is a mix of country lemonade and cayenne. If Alabama from True Romance learned how to fly planes, she and Justine would break hearts, minds, and bones in a parade of shattered victims. The population would never stand a chance.

Billy is big. His heart is big, his brain is wired to make things work, and his body is a temple of physical prowess and unrelenting potential. Billy loves the simple life and puppies. His loyalty is unmatched.

The writer of this review only sees positives from this book.

Last of the Independents is a great story that is superbly drawn. Matt Fraction and Kieron Dwyer have a shared vision. In the afterword, Fraction points to pages and panels that are devoid of text and describes how much he was able to trust Dwyer’s pencils and panels. That collaboration is crucial to what makes this book so much fun to read. Page after page is built on faith and inspiration.

It’s a rugged story that is built on the same bonds of partnership that makes the “small stakes” scores by no-name scoundrels into legendary adventures. Read it on a Sunday afternoon and reminisce. Drift back to a time when Sunday meant an old movie in the middle of the afternoon. The emotions, the drama, and the grit will leave a satisfying feeling in the heart and maybe the hankering for a quiet sunset full of memories.