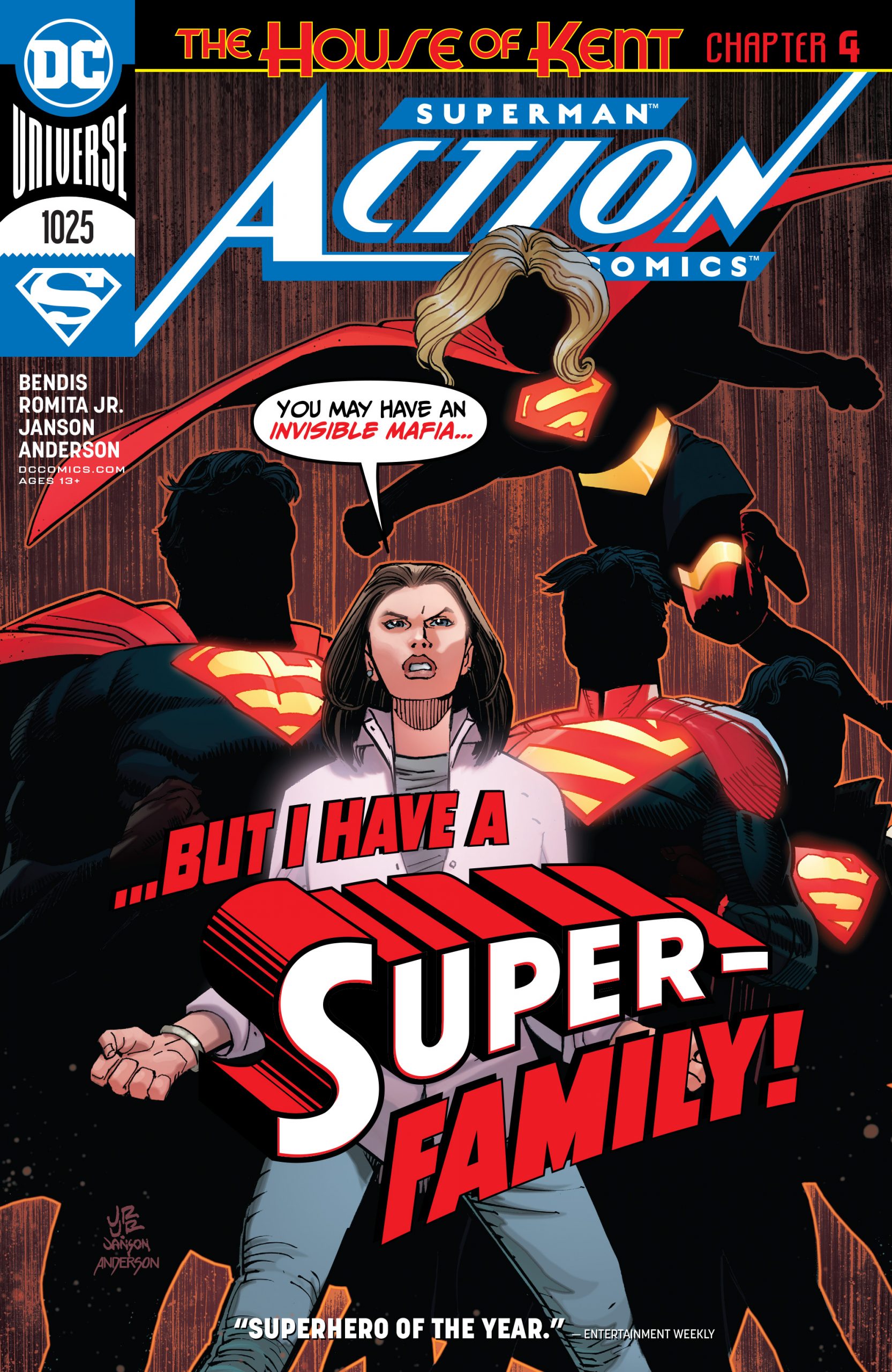 While the Super-family plus Braniac 5 are on the trail of the Invisible Mafia, things come to a head at the Daily Planet with Perry, Lois, Leone and Agent Chase and some surprising accusations by Leone!

I’ve said this on numerous occasions, and I suppose it bears repeating for Action Comics #1025, the Invisible Mafia is the best thing Bendis has done in his Superman run.  The whole “Unity Saga” in Superman with the ho-hum founding of the United Planets and one-note villain Rogol Zaar led to the incomprehensible identity reveal.  And, while Bendis thinks he told a story that explained why Superman revealed his identity…he didn’t.  Oh, sure there are suggestions, but there’s no weight or substance to it.  Here in Action Comics Bendis sidetracked readers with the even-more-boring-than-Rogol-Zaar “Event Leviatian” and “Metropolis: Doom,” while the Invisible Mafia has been waiting for its day.  Action Comics #1025 might be that day….  Things finally start to come together and get REALLY interesting…. 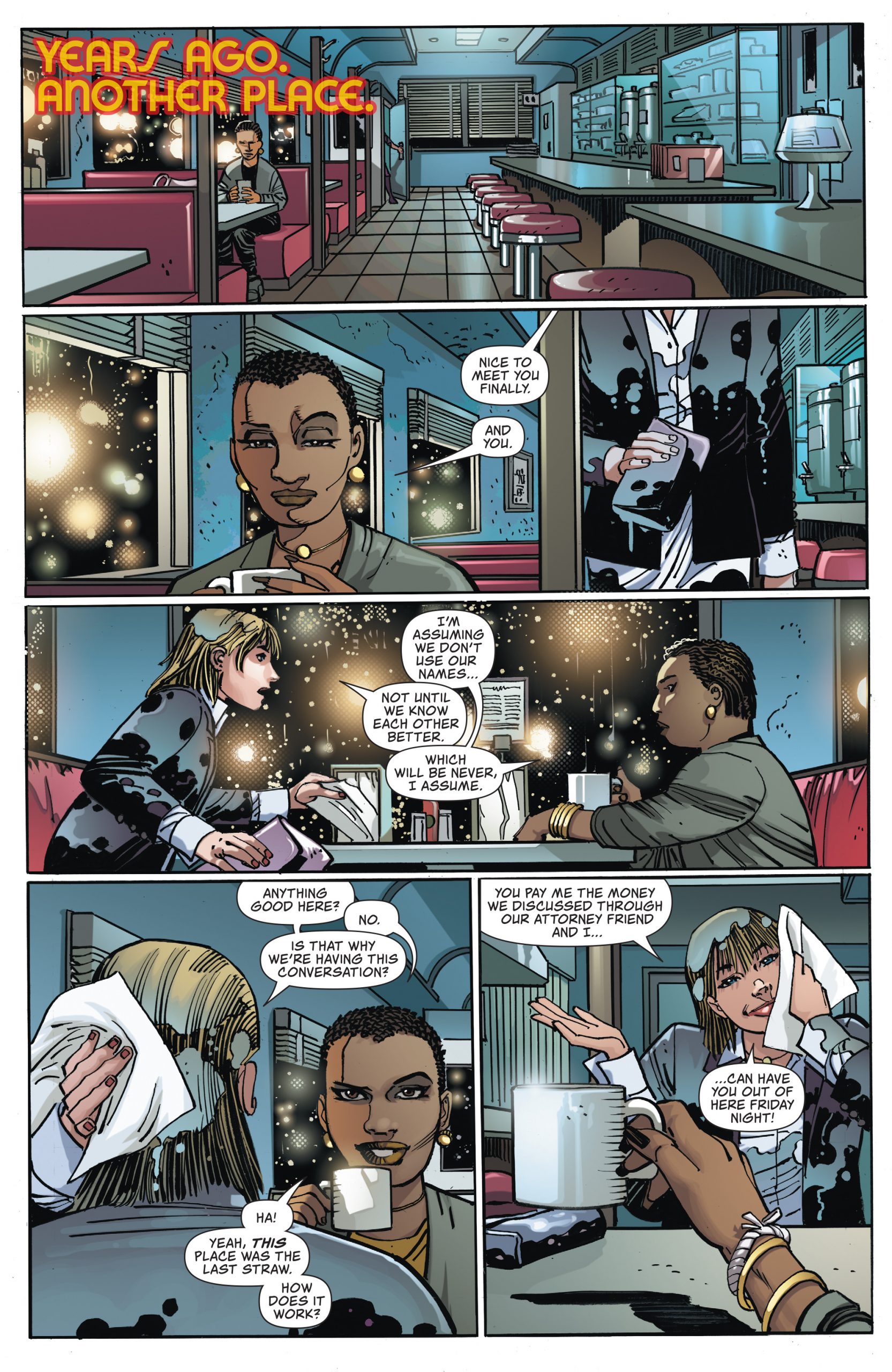 The issue opens with Leone and Dr. Glory on an alternate Earth…Earth-3 it appears to be if that is in fact the Crime Syndicate we see on the splash page.  Glory helps Leone escape to another world….  Guess which world they escape to?  Bendis has been laying the groundwork for Leone’s multiversal origins since Action Comics #1006.  Now we get a little more here.  Is she originally form Earth-3?  Or, some other Earth?  She later summons a Parasite-like creature to take on the Super-family, explaining this creature killed Superman in its dimension and absorbed all his powers.  So, was that Leone’s original dimension?  I’m beside myself trying to figure out why Bendis didn’t work these ideas earlier in his run.  Maybe he knew it was the ONE great idea he had and he wanted to save it.  If that’s the case he should’ve done a 12-issue series and called it quits.

Positves Cont’d (I know, this NEVER happens in a Bendis review)

When Leone shows up at the Daily Planet when Cameron Chase is deciding whether or not Perry can run the story Clark has turned in, she makes an accusation that will shake readers to the core because of the implications.  I first thought something along these lines way back in Action Comics #1004, and one of the main themes of the Lois Lane mini-series would seem to point to the validity of such an idea. 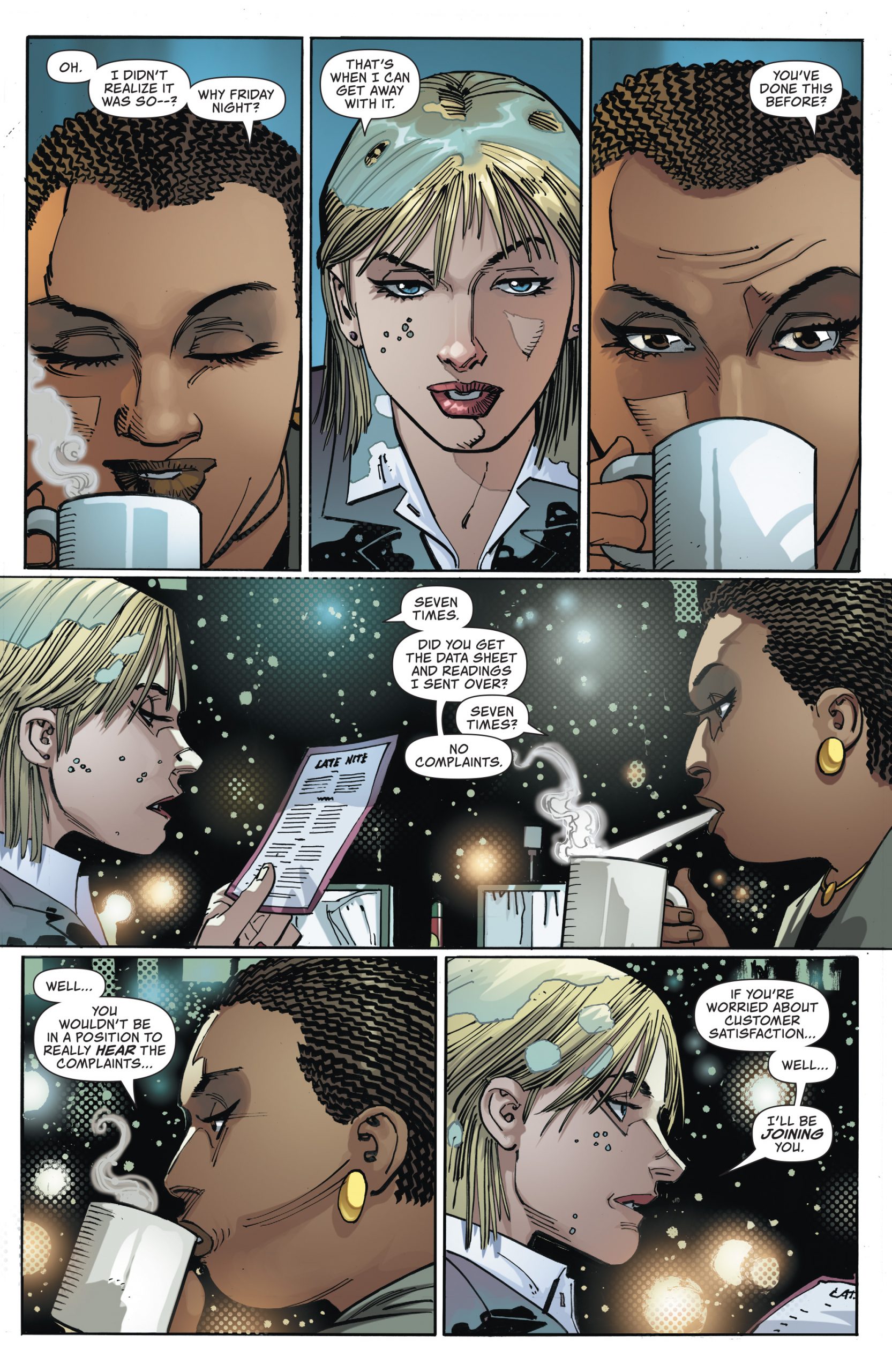 In Action #1004, Lois is written wildly out of character, wildly.  Her voice is off, way off….   Her behavior is way off…. Well, maybe it’s because she’s not from this Earth, this is not the Lois Lane of this Earth!!  Well, that’s what Leone accuses of Lois.  The second half of the Lois Lane mini-series dealt with this exact same theme!  So, Clark’s been having sex with someone who isn’t his wife… (Oh, wait, that’s a Negative!)  So, if Lois isn’t LOIS, is Jon really JON?????   I mean, he did spend a whole lot of time on Earth-3.  And if Jon isn’t Jon, is the Legion of Super-Heroes really the LEGION OF SUPER-HEROES? Earth-3 Legion, maybe?  The solicits for the Superman and Action Comics finales in December promises big surprises….  This Lois is probably the Lois from the dimension where that Parasite-like creature killed Superman.  That would actually explain A LOT! 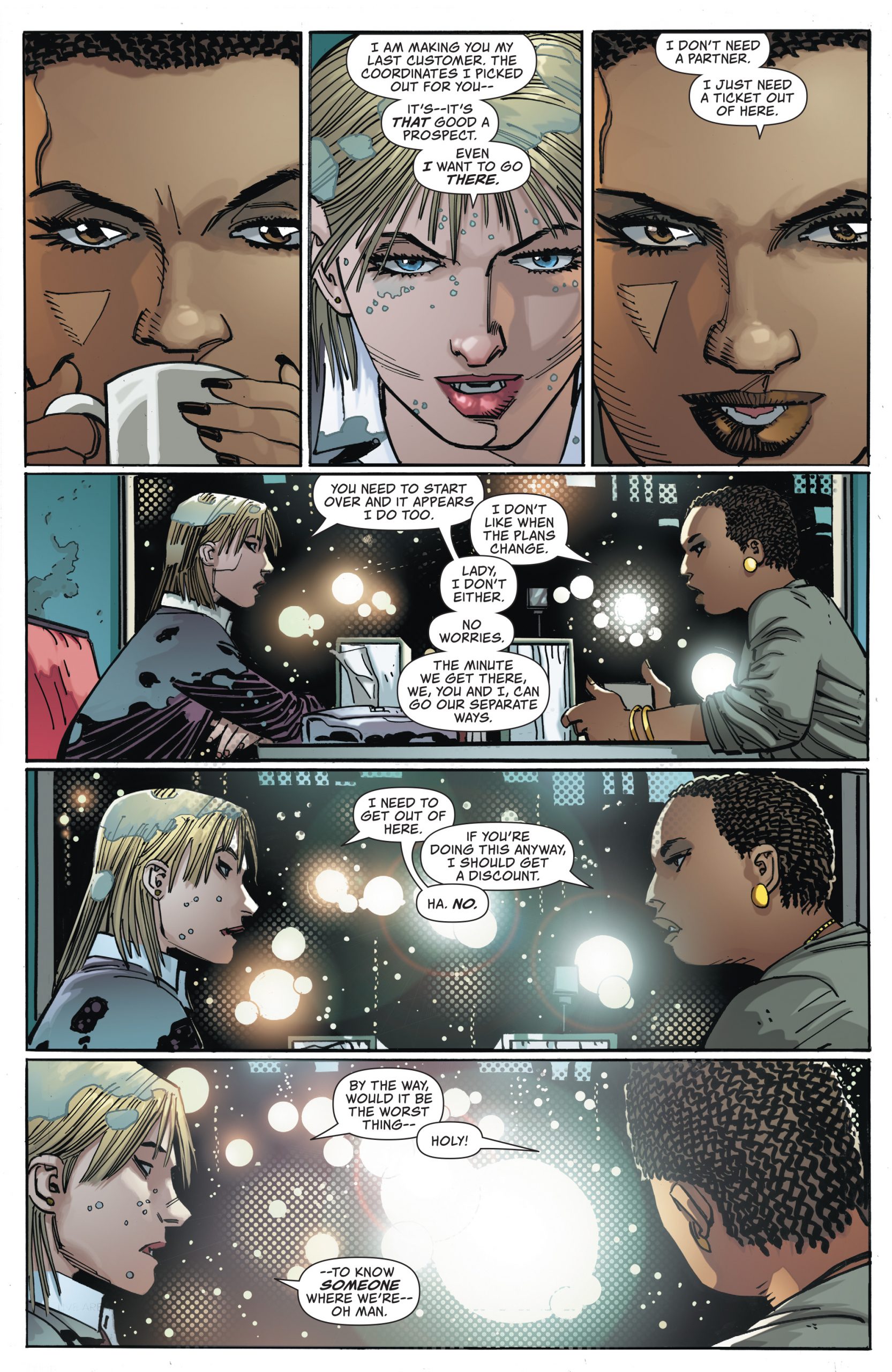 There’s no doubt that Action Comics #1025 has been Bendis’s best issue of his run on the title.  It’s actually interesting and not boring, stuff happens, really interesting stuff, at that.  It also shows that Bendis does have good ideas, though few and far between.

There are some common negatives to this issue with other issues of Bendis’s run on Action Comics.  There are some truly groan-worthy moments of dialogue.  Yes, some panels would be better silent, despite the uneven and often terrible art from Romita, Jr. and Janson.

Of course the biggest negative is that Bendis took so long to get to this interesting stuff.  It really exposes Bendis as a writer in desperate need of an editor.  Perhaps, as a 2 hour movie all this would work, but it’s like a 12 hour movie.  This storyline has gone on for over 2 years at this point.  It doesn’t work at all.  There’s been way too much filler and bad ideas for the 2 or 3 good/interesting ideas.  And, his “misdirection” has not only gone on for far too long, it was just another slew of bad ideas that have been poorly executed. 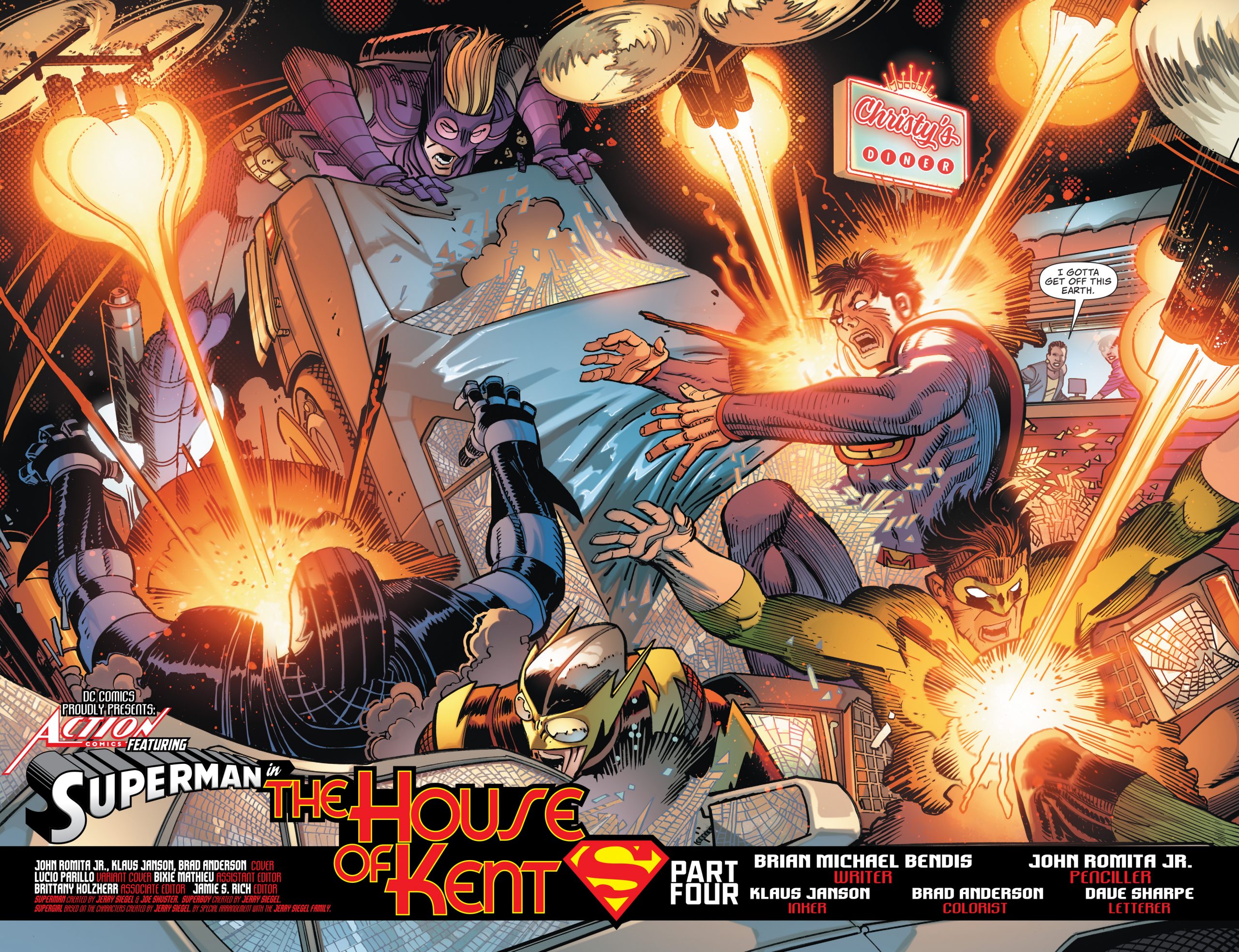 As a single issue, Action Comics #1025 is Bendis at his best on Superman.  Taken as part of his entire run it’s frustrating and some of the implications are unacceptable.  Because, essentially, Bendis has pulled the Shakespearian “bed trick” on Superman.  It’s a shame that Bendis regards Superman so poorly.  He doesn’t seem to know how to treat the character with respect and dignity.  Haha, aren’t you funn! (NOT!)  Whoever signed the papers on Bendis’s contract for DC should be fired…wait…maybe he already has….?   In all fairness, this issue is very good, just hope the next creative team is able to erase this era from the mythos…or perhaps, Bendis has left that loophole in his own story….???