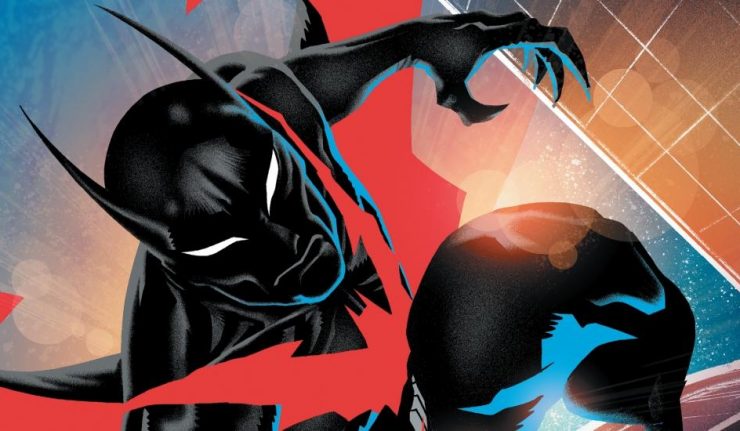 Batman Beyond #47: Mr. Zero’s plan is a success-and now the League of Assassins will finally achieve their goal of taking over the world. Will Batman and his allies be enough to reverse Earth’s new ice age? Or will they be left in space to die?

The highlight of Batman Beyond #47 comes in the aftermath of the Bat-Family’s encounter with Mr. Zero. With the world saved from Zero’s plot, Bruce proposes that he and Damian re-establish their partnership and work toward a brighter future for humanity. As Bruce puts it, “Once we worked together as Batman and Robin. Why don’t we revive that partnership and combine what we have to improve the world?”.

Damian accepts this offer, even though he feels that it doesn’t align with Ra’s Al Ghul’s wishes. Ultimately, Damian ultimately decides to side with his father rather than his grandfather, choosing the Bat over the Demon.

The other notable occurrence happens in the epilogue. Booster Gold (and Skeets) appears in Neo-Gotham, informing us that they are on a mission of great importance. Booster states that if they “don’t get it done… the future will change… and Batman will never exist”.

But which Batman is he referring to – Terry or Bruce? Is something going to prevent Terry from succeeding Bruce as the Batman? Technically, if Bruce’s Batman never exists, then neither will Terry’s. So, I’m guessing he means Terry.

In either case, it sounds like Terry is in for a trip to the past, which would jibe with DC’s solicitations indicating that Terry will be encountering Bruce in his prime. This will be an amazingly cool team-up, and I look forward to seeing Dan Jurgens’ take on it.

I also would like to commend Sean Chen and Sean Parsons on their stellar artwork. The characters all look perfect, and the outer space setting looks absolutely gorgeous.

Sadly, it has been announced that Batman Beyond, like many other titles in DC’s lineup, has been cancelled as of issue #50. But given that we’re headed into a team-up of two Batmen, the series is going out with a bang. And hopefully, DC will revive the series once things start getting back to normal.

Batman Beyond #47 is another fine issue of this series. Dan Jurgens has been doing a fantastic job of continuing the story of Terry McGinnis where the cartoon left off. I look forward to seeing how things turn out next month as he brings together the Batman of the future with the Batman of the present.