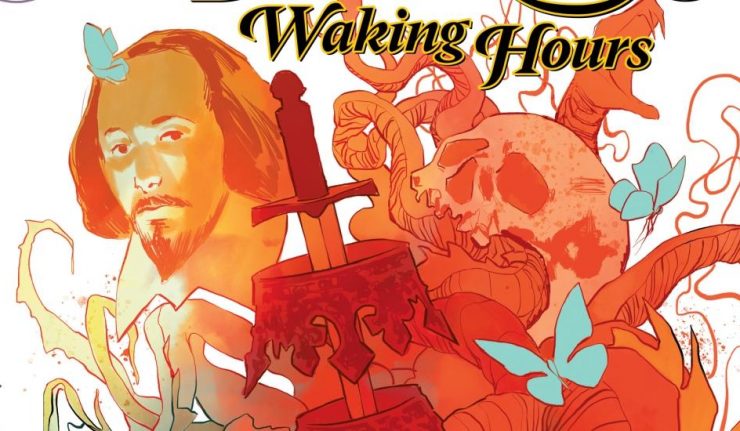 The Dreaming: Waking Hours #3: In the waking world, Ruin and the fallen cherub Jophiel have teamed up with the sorceress Heather After to try to pull Lindy out of the Dreaming, and home to her newborn daughter…but they’d better work fast. Lindy’s mind is rapidly disintegrating as she reckons with thousands of possibilities for who Shakespeare really was, each one alive and walking around in front of her-and if she can’t keep it together, then she’ll be lost forever!

In The Dreaming: Waking Hours #3, we seen another familiar face from Neil Gaiman’s original Sandman series. The sorceress Heather determines that the safest route into the Dreaming would be to go via the realm of Faerie. To do this, she summons a Faerie, who turns out to be the Robin Goodfellow, the Puck himself. The Puck is an especially fitting guest star, considering the Shakespearean them to G. Willow Wilson’s storyline. He first appeared in “A Midsummer’s Night Dream” in Sandman #19, in a story where Morpheus enlisted William Shakespeare to write a play for the King and Queen of the Faerie.

There is also a reference to Sandman #19 when Heather relates the tale of her first meeting with Jophiel to Ruin. She had been attempting to summon a fire elemental, but captured an angel instead. After realizing her mistake, she released Jophiel. When Ruin asks why, she replies, “Summoning is like sport fishing. You set your bait or the fish you want to catch, but if you accidentally hook a shark, you’re morally obligated to set it free. Otherwise the whole ecosystem suffers… which my ancestors learned the hard way”.

This clearly refers to how Roderick Burgess accidentally captured Morpheus in Sandman #1. Roderick and his son Alex’s imprisonment of the Sandman caused significant damage to the Dreaming and even to the waking world. It also brought misfortune to the Roderick and Alex Burgess, Heather’s great-grandfather and great-uncle.

We also see the return of Brute and Glob, two nightmares who not only appeared in Gaiman’s series, but in Jack Kirby’s earlier Sandman series. A hallmark of Gaiman’s Sandman, was how he frequently connected his stories back to earlier stories. It’s great to see Wilson likewise connecting her story back to Gaiman’s classic title.

In the Dreaming, Lindy comes up with a plan to help her judge which version of Shakespeare is the real Bard of Avon. Lindy realizes that years of study of Shakespeare’s plays wasn’t sufficient for her or anyone else to conclusively solve the question before now. So, she has an epiphany that if they put on an apocryphal play, she will be able to look at it with fresh eyes – “something I can’t project myself into.

I am curious what this apocryphal play will turn out to be. Will it be an actual play in the real world that is dubiously attributed to Shakespeare? Or will it be one of the lost plays that we only know by title? Or will Wilson create something entirely new something completely new.

I quite like Nick Roble’s artwork – particularly his depiction of the Dreaming’s otherworldly chaotic nature. His art and Mat Lopes’ colours do a fantastic job of recapturing the feel of Gaiman’s Sandman title.

G. Willow Wilson’s story is not lacking in any matter I can detect. It is every bit as engaging as you would expect from a talented writer like Wilson.

The Dreaming: Waking Hours #3 builds continues to build on the strong start G. Willow Wilson gave us in the previous two issues. Her unique tale is an engaging and captivating continuation of the Sandman mythos.