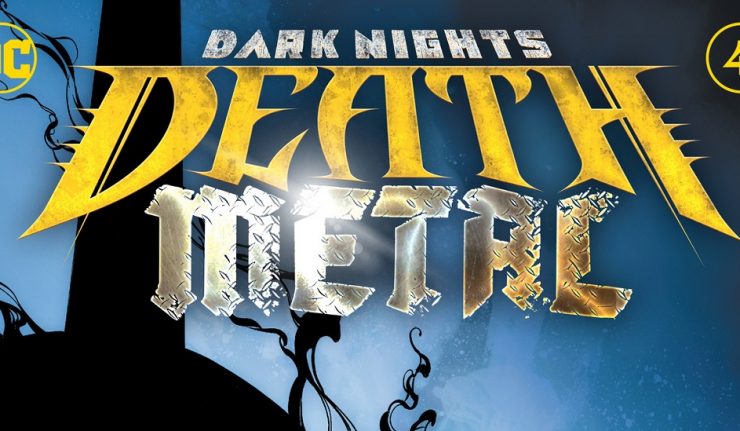 “We’re in the cake now!  The thickest part!  That cut of the battle where it could slice either way.  And so everybody – EVERYBODY – is leaving it out there on that hill!” – Sgt. Rock

It’s the fourth issue of the Metal Encore! The legendary team behind Dark Nights: Metal and Batman: Last Knight on Earth take center stage and reunite for one last tour.
Wonder Woman, Batman, and Superman are trapped in nightmare worlds within the Dark Multiverse! They’ll need to face down their fiercest foes once again if they hope to accomplish their mission and bring back a power capable of stopping the Darkest Knight. But what horrors has he unleashed on Earth while they’ve been locked away?!

First… the Death Metal series has to be simply be read over and over again.  It’s that good, but it also has so many visual clues that Greg Capullo has subtlety placed in the frames that you need to take multiple drinks from this fountain!

Consequently, you have to be able to keep up with the storyline, but after all, this has been spanning a LOT of issues over the DC Timeline! I see some Zero Hour homages in this one…especially in Batman’s mission.  That “White Out” is not from a Penn State game!  It is straight homage to Zero Hour (Whether Snyder did that on purpose or not)!

It is only fitting that Sgt. Rock gets some narration time as well in the Death Metal series.  He’s not looking that good, but no man or woman is left behind no matter their condition.   Rock serves as a great “catch up” on which teams are where in the timeline and what they are up to.

This is a crescendo issue with the arrival of everyone back to see if they were able to eradicate The Batman Who Laughs or at least gain the upper hand!.

The Lanterns were to take out the Antennae!  The Speedsters were to keep Wally away from TBWL.  Jarro, Swamp Thing, Jonah Hex and Harley Quinn were in the midst of a battle with the Robin King.  And the Trinity were looking for the worlds powering Perpetua!  What could go wrong?  Scott Sndyer knows!

The Art!!!!! There are classic scenes in this book!

Darkseid adorned with horns “If you wish to speak to me, you must kneel”!  Is he Jabba the Hut with Supergirl at this side and a kneeling Green Lantern?  “Darkseid is….” – JLO fans will get this!

Four Supermen pinning down Superman?  Final Crisis…Infinite Crisis…Superboy Prime!  This timeline is crashing down.  One literally feels like you are in a mixer if you have been keeping up with any DC adventures through the years!

That Robin King…he’s more haunting lately than The Batman Who Laughs.  Capullo is letting his Spawn time come through.  Look at that bloody hammer that Harley is staring at.

Wonder Woman – sigh!  Can we keep the blue highlights in her hair?  Please! The last page of the comic…no spoilers here, but THE LAST PAGE OF THE COMIC!!!!

None here as I think we are getting some order in this chaos.

This issue came at a perfect time as the war seemed to be dragging out.  I didn’t like the time travel idea at first as it is an Avengers rip off.  But it was necessary to get all the components together to do what has to be done….as Snyder will eventually reveal!

The cover art is AWESOME!

Who is going to survive this?  I’m all over the place as the Justice League comics and the final Justice League Odyssey seem in cahoots with this storyline as well!

These Death Metal issues will have you scratching your head one moment, but they appear to be shaping DC for years to come!  Here’s to this issue and hoping time flies so we can get the next one!