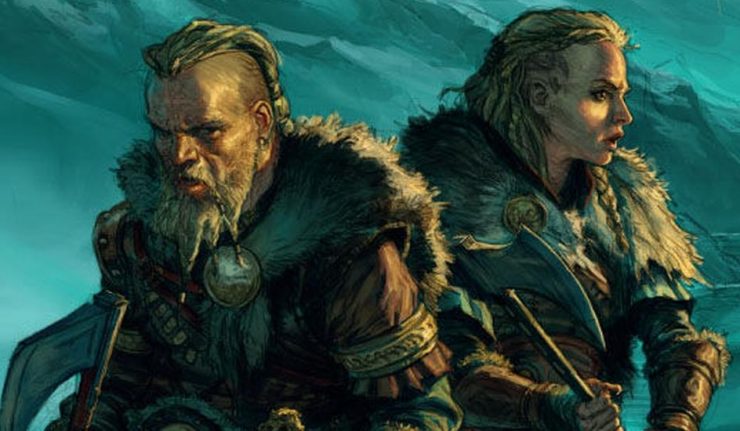 Assassin’s Creed Valhalla: Song of Glory #1: Blades clash in this prequel to Ubisoft’s next hit video game, Assassin’s Creed Valhalla. Norway. Mid-9th century CE. Eivor, a Viking warrior, observes a village raided by a neighboring kingdom. Bloodshed and mayhem erupt as she seizes the attack in her own favor–but will her victory be a blessing to her clan or a terrible curse? Elsewhere, another Viking searches for a different kind of prize, one of crucible steel . . .

Assassin’s Creed Valhalla: Song Of Glory #1 serves as the introduction to Eivor the protagonist of the next Assassin’s Creed videogame, Valhalla. While, Eivor has already appeared in the game’s trailer, but that’s more of a teaser than a proper introduction.

I found it interesting that no reference is made to the Animus or the current end bookend story that is present in all the Assassin’s Creed games. It makes sense to skip over this facet of the mythos. The Animus is generally used to rationalize common videogame features like the ability to respawn after dying. In a non-interactive narrative, this is unnecessary, so the story can be presented as if the reader is experiencing it directly, and not seeing a virtual recreation of the events.

It’s interesting that this story presents Eivor as a woman, when the game offers you the choice between playing as a male or female protagonist. Ubisoft has stated that unlike AC: Odyssey, where the female protagonist is the canon version, in Valhalla, both versions are somehow canon.

I found it intriguing that the story actually hints at this. A character named Gull, who appears to have some mystical abilities, senses that Eivor has a dual nature. She asks of Eivor, “What face do you wear? Whose soul do you hide?”, as we see a split image of Eivor, which is female on one side and male on the other. It appears that somehow Eivor does have a dual nature that somehow makes both genders canon. I wonder if this series will explain this mystery, or if it will be explored in the game instead.

This series also gives some hints about what Valhalla’s gameplay will be like. There is a lot of violent fighting, which is fitting for a Viking story. But I am concerned that there is no indication yet of the franchise’s signature steal mechanics. I hope that players will still be able to play stealthily if that’s their preference

Now, I’m no authority on the Vikings, but the story so far does seem to have a historically accurate depiction of the Vikings. I did not see any characters wearing the cliched, but unhistorical horned helmets usually associated with Vikings. Generally, Ubisoft is rather good at getting such details correct, and it appears that this is true for this tie-in story as well.

Generally, the purpose of this story is to introduce us to Eivor and her world, and hopefully stir interest for the forthcoming game. In this regard, the story is succeeding admirably. Already, I am intrigued by Eivor and look forward to her (or his) adventures in both on the comic page and in the videogame.

I have no complaints so far. The story presented in Song of Glory #1 succeeds both as an enticement to play the game and as an entertaining story in its own right.