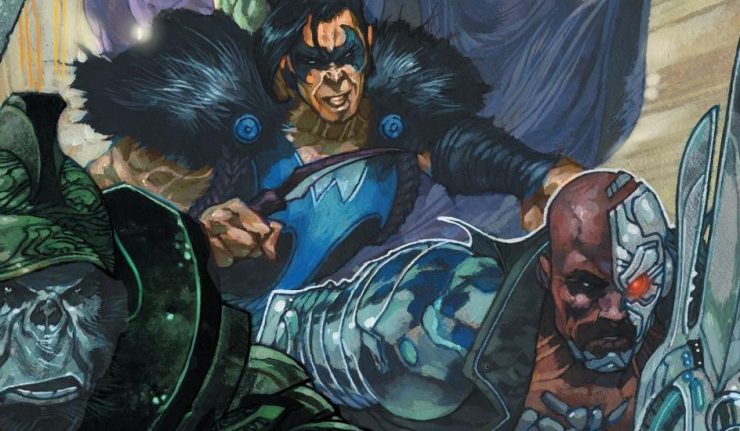 Justice League #55: The motley crew of “Doom Metal” sets sail for the cliffs of insanity, captained by Nightwing-or so he thinks! The team fractures, and Detective Chimp reveals the horrible secret wish in his heart. And speaking of hearts, Hawkgirl will stop at nothing to find Martian Manhunter, even if she jeopardizes the League’s mission and their souls. Part three of this five-issue tie-in to Dark Nights: Death Metal features the debut of a villain so huge he dwarfs all hope. Enter the Omega Knight.

In Justice League #55, Joshua Williamson continues his Dark Nights: Death Metal tie-in story, “Doom Metal”. This chapter deals focuses on this group’s struggle to hold together as a team until they can rescue Martian Manhunter and the Legion of Doom from the forces of Perpetua.

The team doesn’t really resemble like a Justice League team, with three Titans, Detective Chimp, and Lex Luthor. But all of them are or have been members of some incarnation of the League in DC history – even Lex.

But Detective Chimp has little faith in this team. He states, “We’re not the Justice League… we’re the Suicide Squad”, referring to them being second string characters faced with seemingly impossible task.

And there are many stresses on the team. Hawkgirl puts the entire mission in jeopardy out of impatience. Detective Chimp would have preferred to stay under the sway of Starro’s illusion than face the real world, and no one trusts Lex.

And that’s a valid concern. Even though Lex appears to have sufficient motivation to be aiding the heroes, it’s still very possible that he’s using them to forward his own secret plans. I suspect that we will see some form of betrayal from Lex before this story is over.

The issue ends with the team encountering the Omega Knight. I am intrigued by this giant menace. Hopefully, Williamson will provide some backstory on this character in the next issue. I will hazard a guess that this is a mash-up of Batman and Darkseid. Omega is a symbol usually associated with Darkseid, and of course, nearly every ally of the Batman Who Laughs is a dark version of Batman.

I am quite enjoying the art of Robson Rocha and Daniel Henriques. While I would love the chance to see them draw the regular Justice League roster, they appear to be having great fun drawing Death Metal versions of DC characters. One example that I loved was the ship made of the corpses of the Metal Men. This looked particularly disturbing, but somehow also awesome.

I’ve said it before and I’ll repeat it again here. Justice League really needs to have a regular writer at the helm. I believe that “Doom Metal” shows that Joshua Williamson would be an ideal candidate for the job. And if not, it’s not like DC has any shortage of talented writers to choose from.

Also, while many may think the absence of the main team should count as a drawback, I think it’s refreshing to see a story with a different lineup for a change. Perhaps DC should consider shaking up the team’s membership of their flagship team. That’s not to say that they necessarily have to ditch the Trinity, but maybe they should add a few new members. It seems to me that the time is right to bring Black Lightning into the team.

Justice League #55 is a great chapter in an entertaining side-story to Death Metal. This story is adds some depth to the overall event, allowing a look at more of the Death Metal DCU. While you probably could follow the event without reading this story, I would recommend that it is well worth reading on its own merits.