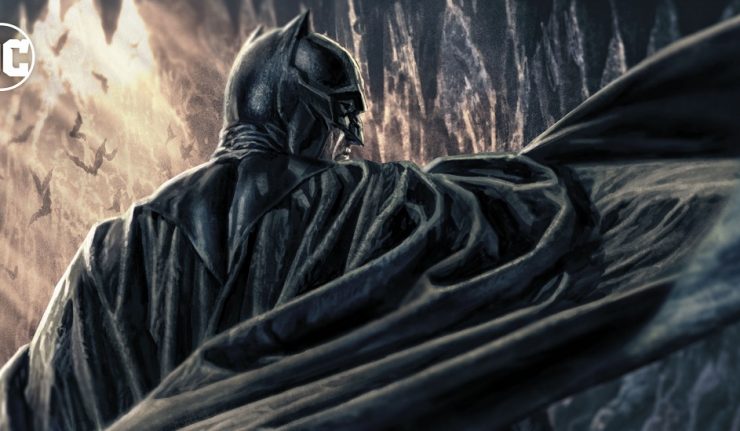 Batman and family try to cope with the “unmask” agenda while the Dark Knight tries to come to grips with Damian’s theft of the Black Casebook.

With Detective Comics #1030, Peter Tomasi really opens things up.  While the Bat-family deal with the Mirror’s “unmask” propaganda, we also get to see how Christopher Nakano is being affected by the death of his partner back in Detective #1027.  Add in the fact that Tomasi gets to explore the bigger picture with Damian and the events of Teen Titans Annual #2, it becomes clear that Detective Comics is the Batman title you should be reading.  Ultimately, it all comes down to an emphasis on character instead of event.  Even the truncated meeting of the Bat-family in this issue demonstrates that it’s the characters and the personal relationships between them that drive the story.

Christopher Nakano, we realize in this issue, is trapped in his own personal hell, and he blames himself and the Batman and the Bat-family for his predicament.  It’s a powerful scene as he experiences a nightmare that cleverly shows not only the difficulty he’s having, but also the other side of the coin as Batman, while vilified is not clearly the villain in the dream.

The Mirror, introduced last issue, doesn’t make an appearance, but his unmask movement is front and center as the Bat-family find themselves in a trap set up by his followers.  Not even the Dark Knight figures it out in time.  What’s really great about this moment is the human emotion we see from Bruce, as he professes a genuine desire to talk to Damian who’s apparently unfindable at the moment.  His care and concern come through for his son, as well as for the entire Bat-family as they realize that they have to find a way to convince the people of Gotham that even though they wear masks, they aren’t the bad guys.

The real surprise of the issue is Damian’s storyline.  Back in the Robin 80th Anniversary Super-Spectacular, there was a story that set up Damian at odds with his father.  This led into Teen Titans Annual #2.  Tomasi gets to follow up on these events as he weaves in his own mystery of the theft of Batman’s Black Casebook.  This issue reveals that it is not the same “Black Casebook” seen in Grant Morrison’s fabulous run on the character, but rather a series of unsolved cases, initially involving attempts on the life of the young Bruce Wayne.  Damian has been set at odds with his father in the previously mentioned stories, but this issue reveals that there is most likely a different motivation behind Damian’s actions in order to try and solve the cases in the Black Casebook.  It’s not only a treat to read, but a fun twist on what could’ve been a long lasting dark turn for Damian.  (See Batman #666 and Legion of Super-Heroes #3).

The past three issues have featured three different artists.  Last issue was illustrated by Kenneth Roccafort, Detective #1028 showcased the work of Nicola Scott and now Detective Comics #1030 gives us Bilquis Evely turning in some truly outstanding work.  Evely has an academically expressive style that channels a palpable energy.  This suits this issue particularly well.  Colorist, Matt Lopes compliments this approach.  While Evely’s work has always been a joy to view, she seems to bring something extra to this issue.

I am hard pressed to find a negative with this issue.  The entire team delivers as the mystery widens and deepens.

Tomasi leans hard into character with Detective Comics #1030 letting it drive not only Bruce and the family, but also Detective Nakano and the most likely, soon to be prodigal son, Damian.  Throw in the exceptional work of Bilquis Evely and it’s a no-brainer!  If the character work doesn’t get you, the mysteries will- this is the Batman title you should be reading!