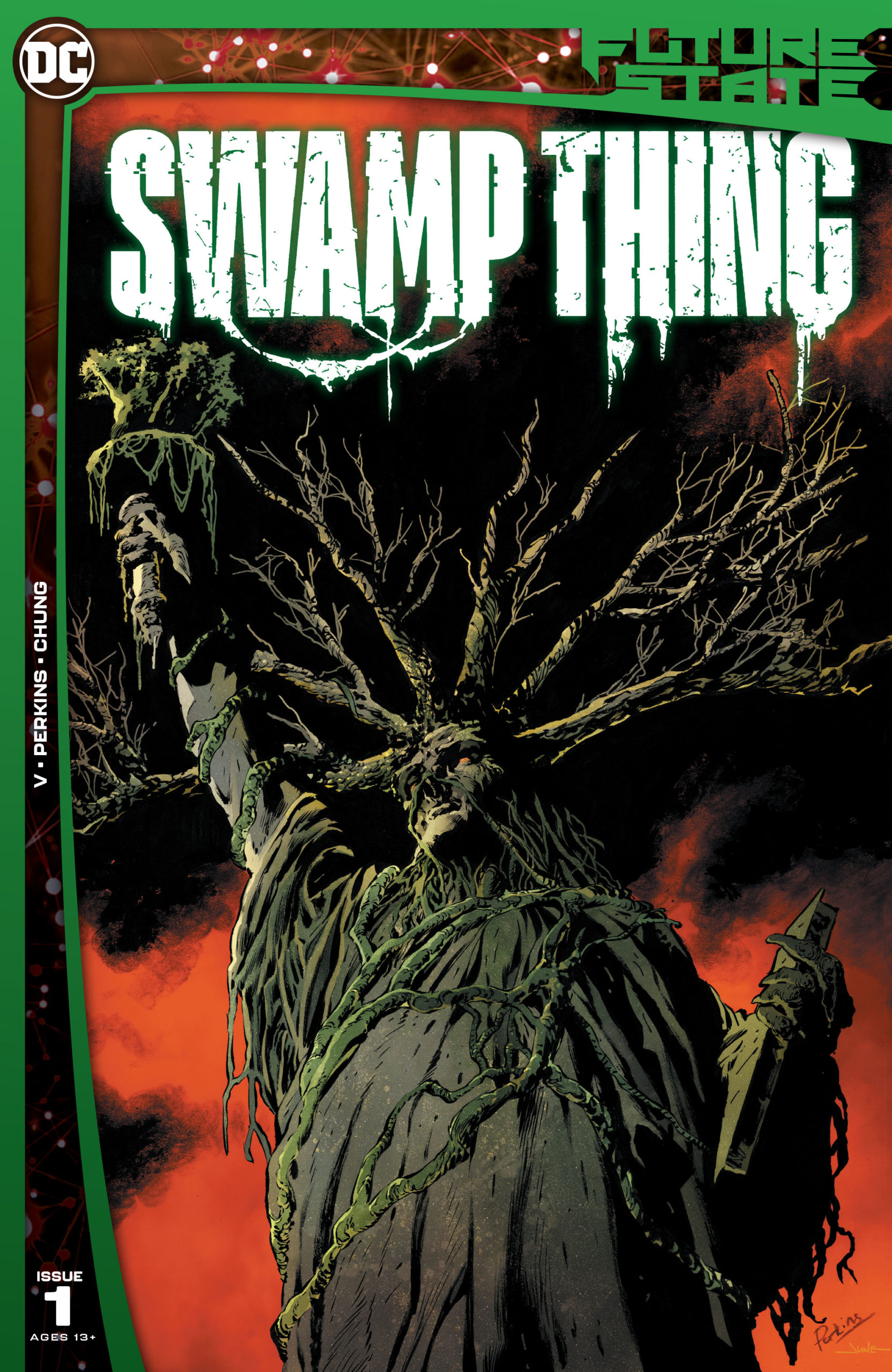 In a post- Apocalyptic world, Swamp Thing and his plant “family” search for humans who have not been seen in ages.  Swampy seems to have a secret though….

As quickly as page two with the overgrown Statue of Liberty, Future State: Swamp Thing #1 evokes a bit of Planet of the Apes.  While a fallen Statue of Liberty is a well known image from that seminal work of science fiction, this issue has the same feel, without the presence of apes, or humans for that matter.  It’s the same feeling of post-destruction society with just a few beings searching and exploring their world.  And, it’s also the secret that Swamp Thing is hiding.  In Planet of the Apes the secret is that the astronauts are still on Earth in the far future.  In this comic, the reader can most likely guess that it’s Swamp Thing’s beginning as a human.  Yet, it’s the drama surrounding his ability or lack thereof to keep this secret and the impact it will have once it finally gets out.

Ram V and Mike Perkins recall another famous Swamp Thing story in the pages of Future State: Swamp Thing #1- Alan Moore’s classic, “The Anatomy Lesson.”  Interspersed between the narrative, Swamp Thing explains to the reader (himself in the story) how he created these other plant creatures, recalling the intricacies of designing their anatomy out of plant material to mimic human bodies.   It’s a nice touch for old readers, but an interesting way to demonstrate exactly what’s going on to new readers and how Swampy’s creations work. 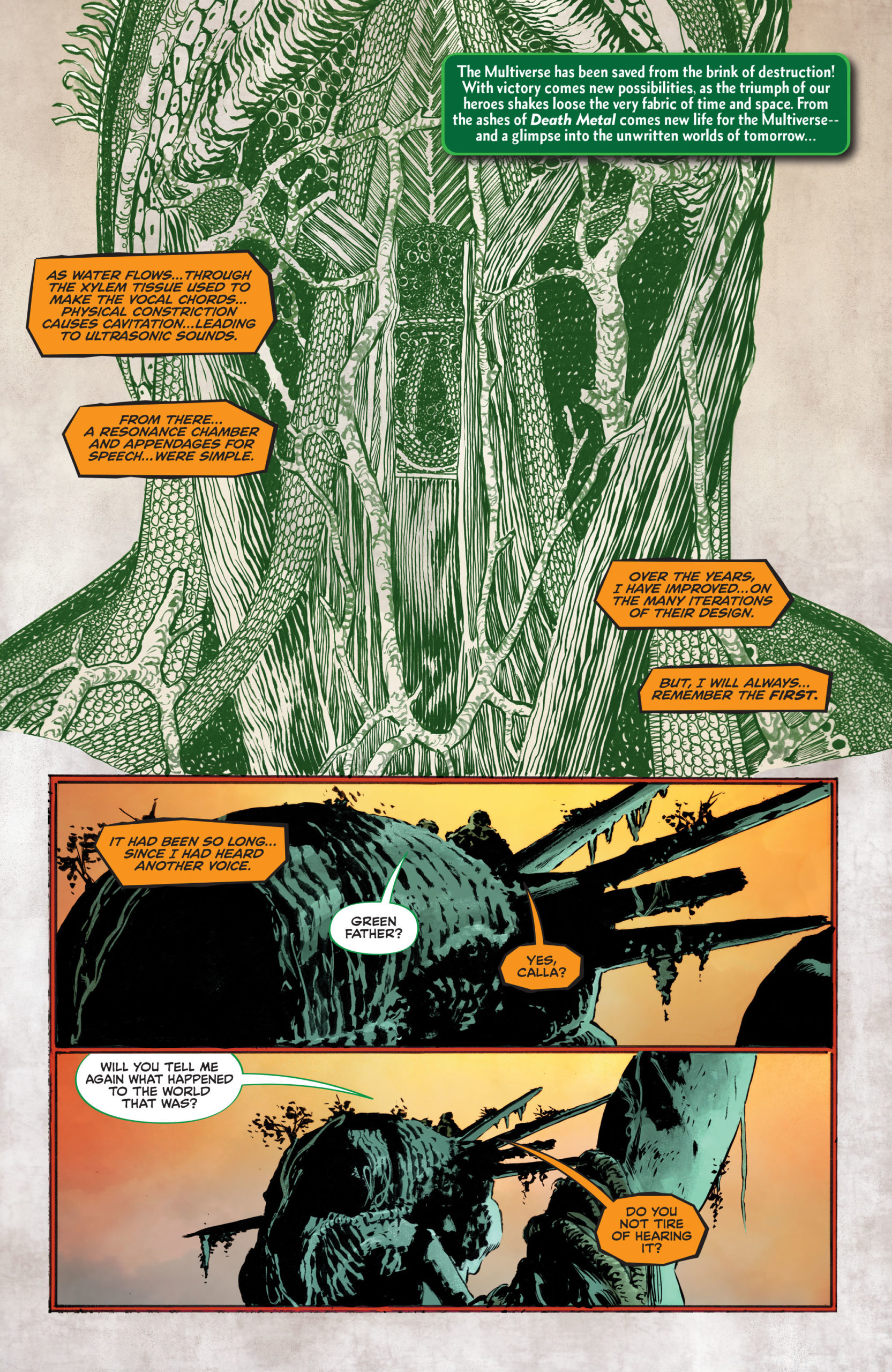 These creations are interesting in their own right.  V makes sure that they are recognizable as individuals in their actions and dialogue.  They have distinct personalities as well.  And, despite much of this issue being world building, the character work is interesting and reflective.

This leads to another mystery, one not as easily guessable by the reader- who is this Swamp Thing?  We can easily assume it’s Alec Holland, and that is certainly possible, but let’s not forget that Ram V and Mike Perkins recently contributed to an anthology that featured different avatars of the green, Legend of the Swamp Thing Halloween Spectacular #1.  Add in that DC Comics Solicitations for March feature a new Swamp Thing #1 by V and Perkins starring a new avatar Levi Kamei as the protagonist, it’s not a sure thing that this is Alec Holland in Future State: Swamp Thing #1.  Mysteries are good a good way to start a new series and this issue is no exception.

Like his work on the aforementioned Halloween Spectacular, Perkins’ style fits well with Swamp Thing.  It’s a challenge at times to make the different plant-based creatures unique looking, but Perkins accomplishes this.  Abetted by June Chung on colors, the art in this issue is worth the price of admission.  It’s easy to get lost in this lush world.  The “anatomy” pages are stunning in their detail.  You will get lost if you look too long….  Along those lines, there’s almost a lullaby/fairy tale nature to the story that lulls you into comfort despite the setting.  It fits right in with the art, it’s got to be the way Swampy speaks…. 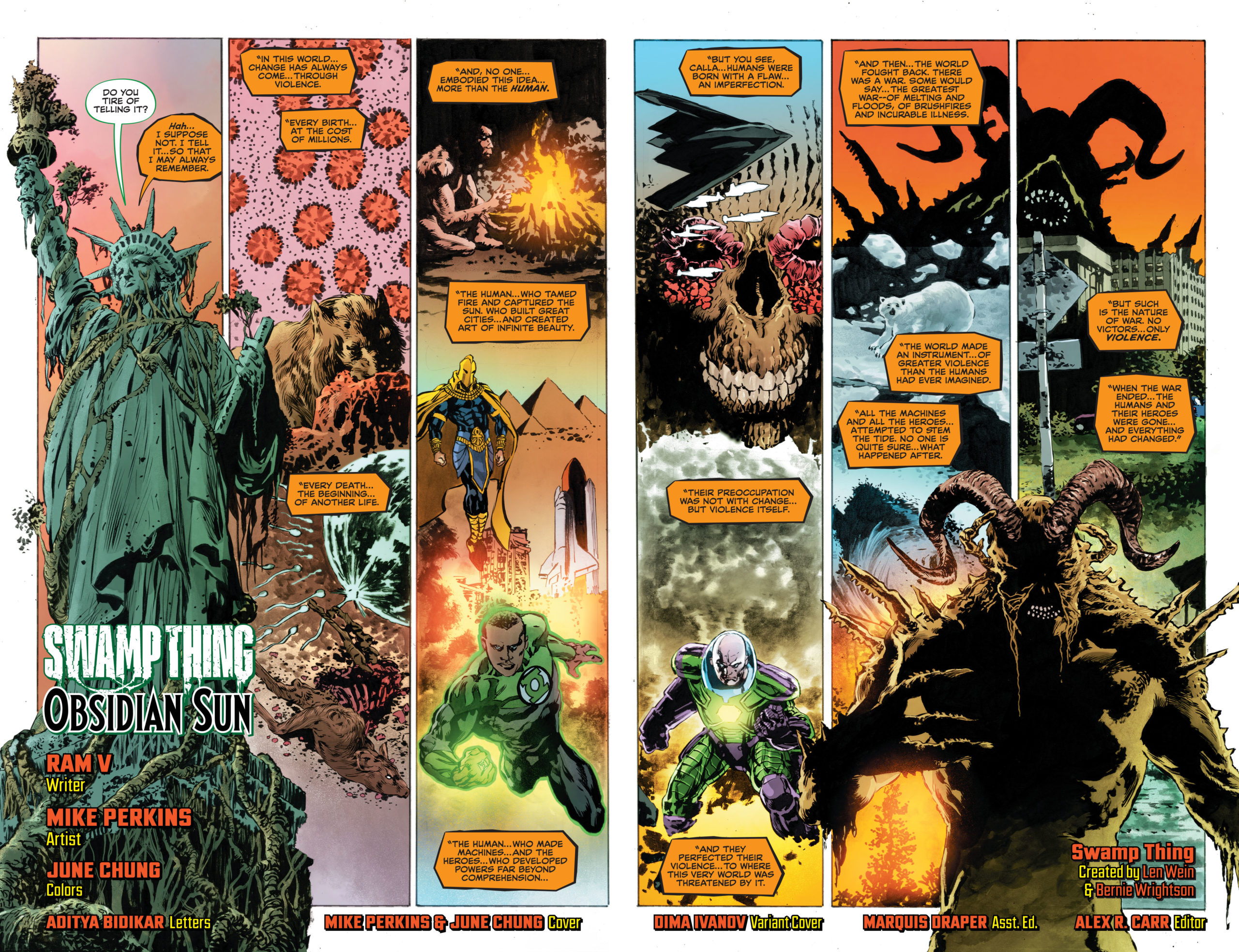 Finally, there are some interesting plot/world building ideas worth mentioning.  All the plant creatures in the story are Swamp Thing’s creations and (perhaps?) Anton Arcane is using Obsidian to further whatever evil plan he’s operating. 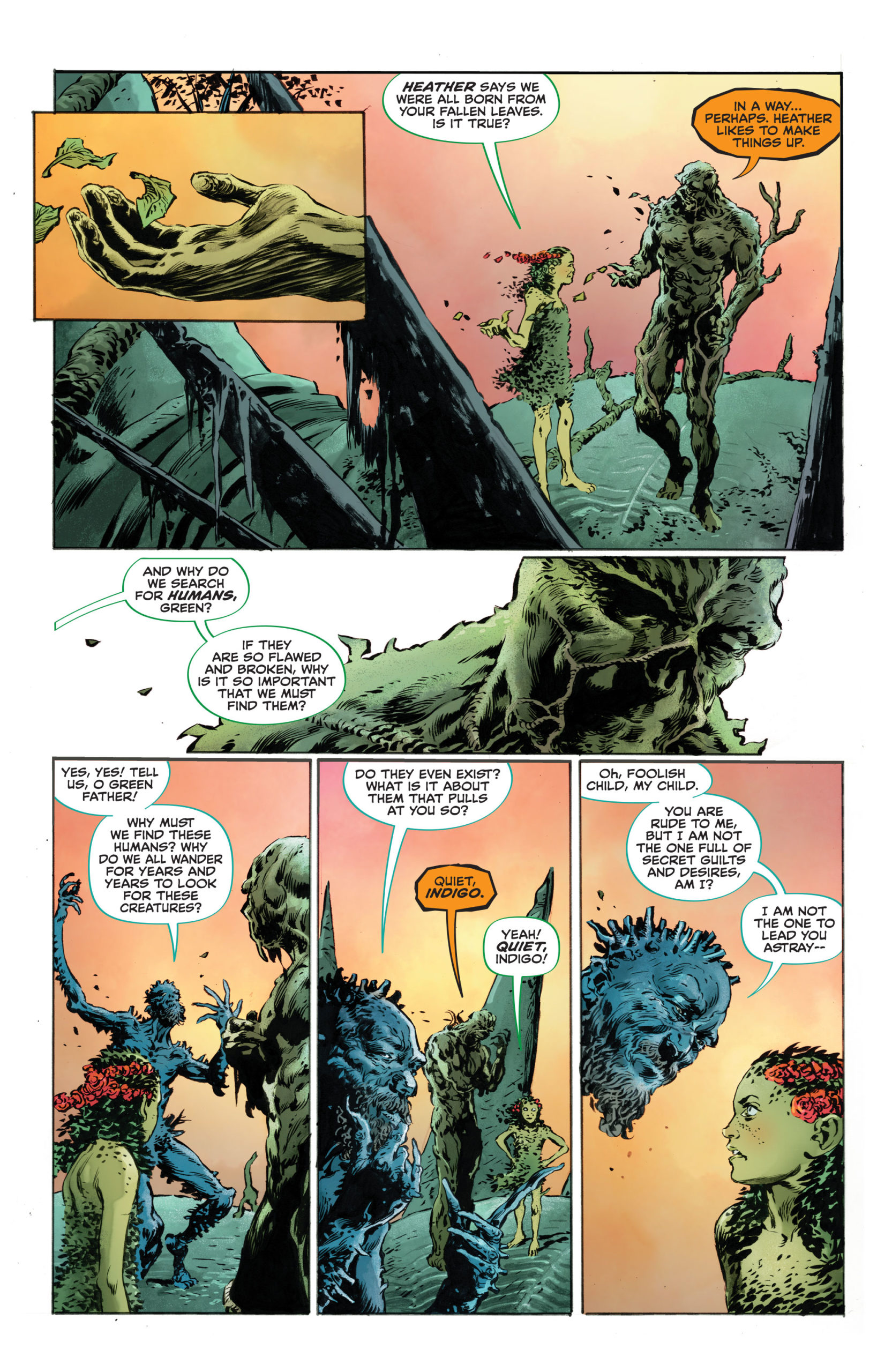 Whether this book ties into the forthcoming Swamp Thing series or not, it’s an intriguing and thoughtful issue that invokes classic greatness, be it Alan Moore or Rod Serling (yes, Serling wrote the orginal script for Planet of the Apes.)  It works completely on its own without prior knowledge of the character or concept, and may even work a little better if the character is new to the reader.  This already promises to be one of the best books of the Future State event.

Review: Future State: The Next Batman #1