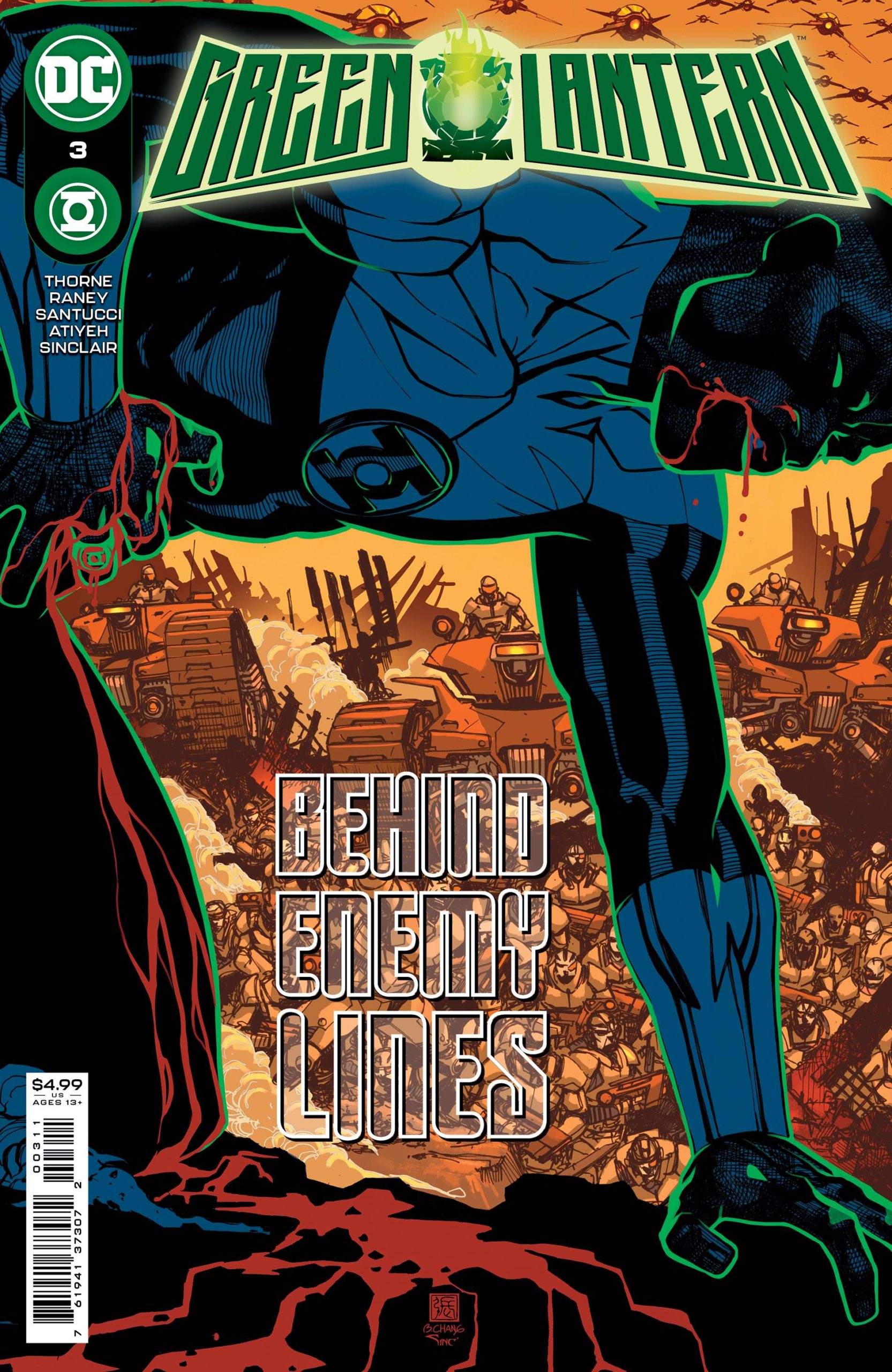 John Stewart finds himself alone on an alien world wondering where his fellow Lanterns have gone, while back on Oa, Jo Mullein tries to pick up the pieces as the only Lantern left with a working power ring.

When popular characters and concepts go in a new direction, two things happen: One-fans complain that everything’s been changed and that it’s not “their (insert character/concept here);” Two- fans get excited about something truly different and laud the new direction.  Green Lantern #3 is that issue that points to the different direction in which this series is going.  The previous two issues have set up what’s coming fairly well and they’ve felt more or less like Green Lantern comics.  Issue #3, however, really feels different, but it’s not like it’s completely unfamiliar.  Even in the comic itself there seems to be a nod to some of the inspiration for the vibe in this issue.  That said, Green Lantern #3 does feel different and fresh, but at the same time familiar, even if it doesn’t necessarily feel like a Green Lantern comic. 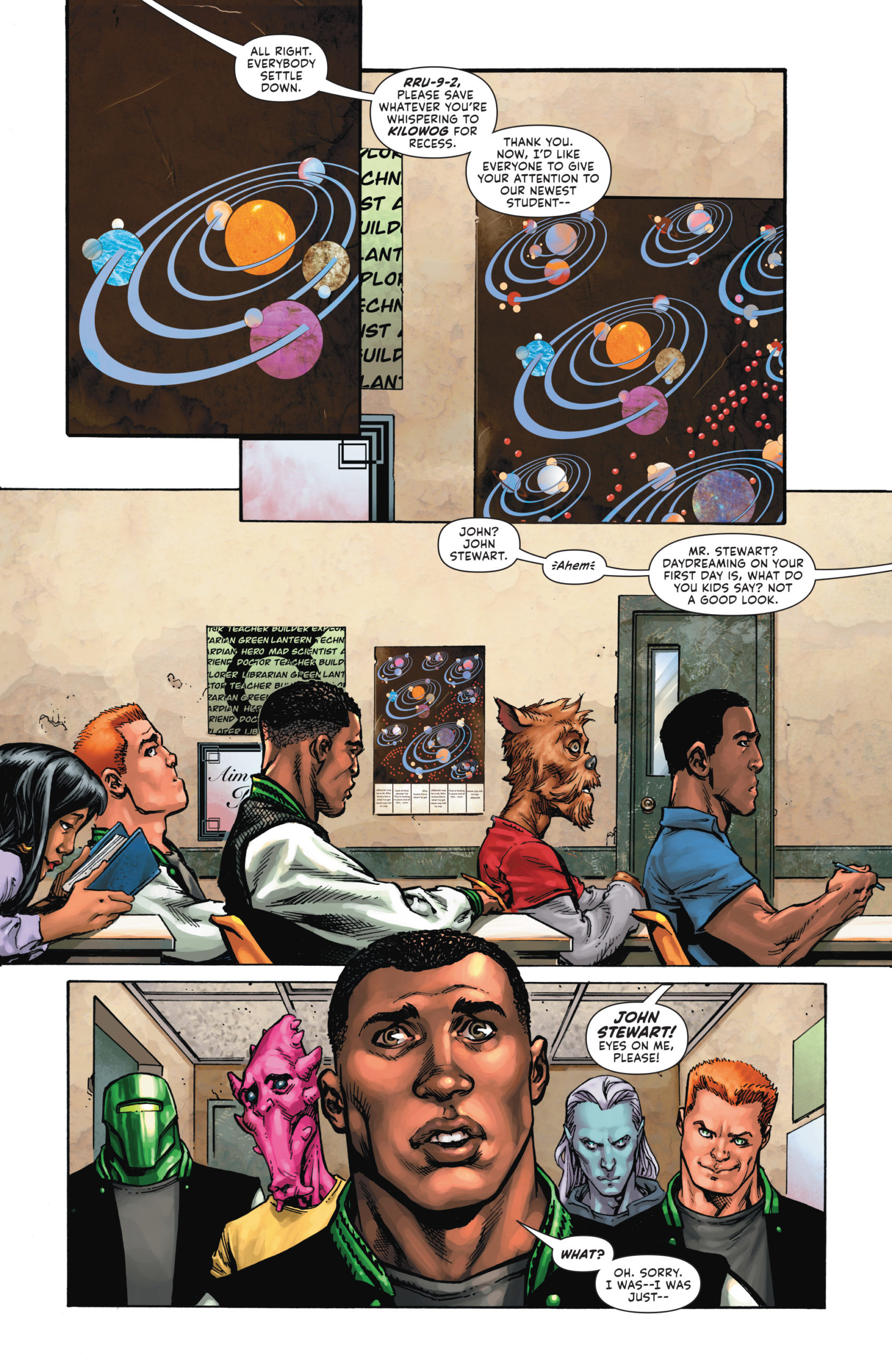 It’s important to note, that what makes this change work is that  it’s part of the story and organic.  It’s not something completely out of nowhere and it respects what’s come before.  It’s not easy to change things up sometimes, but the more organic and inclusive of the past, the better it will be received.

For fans of Science Fiction, there are few television shows that have a bigger following than Star Trek.  It’s original three season run in the late 1960’s spawned numerous films, additional television series and countless merchandise.  Green Lantern #3 is split into two different stories that follow the events of last issue.  The first finds John Stewart on an alien world on which he’s been taken.  He can’t seem to figure out how he got there or what happened to his fellow Lanterns with whom he was travelling into the dark sector.  Geoffery Thorne doesn’t give it to us easily, though.  The reader is lost with John for a while as whatever is manipulating his thoughts shows us Katma Tui and a bizarre version of John Stewart in High School. 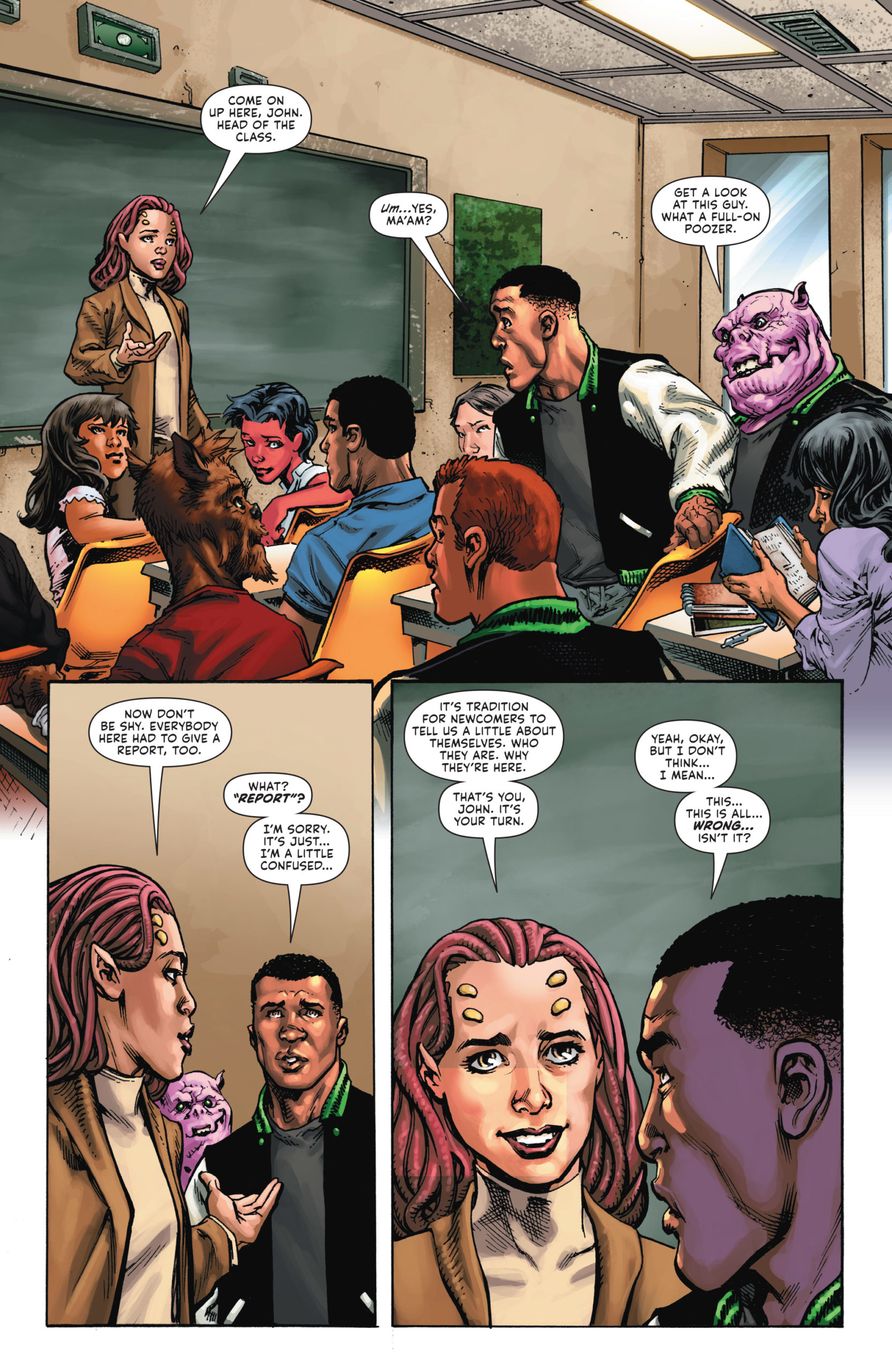 It’s not until we get a familiar vibe when John and other Lanterns appear to be the crew of the Starship Enterprise, or at lease a vessel that evokes a similar milieu.  It’s clear at this point that John seems to be right in the middle of a Star Trek episode.  And, it works brilliantly.  It doesn’t require any knowledge of Star Trek either, because instead of trying to ape a particular episode or nomenclature, it’s the themes and type of story that Thorne presents. 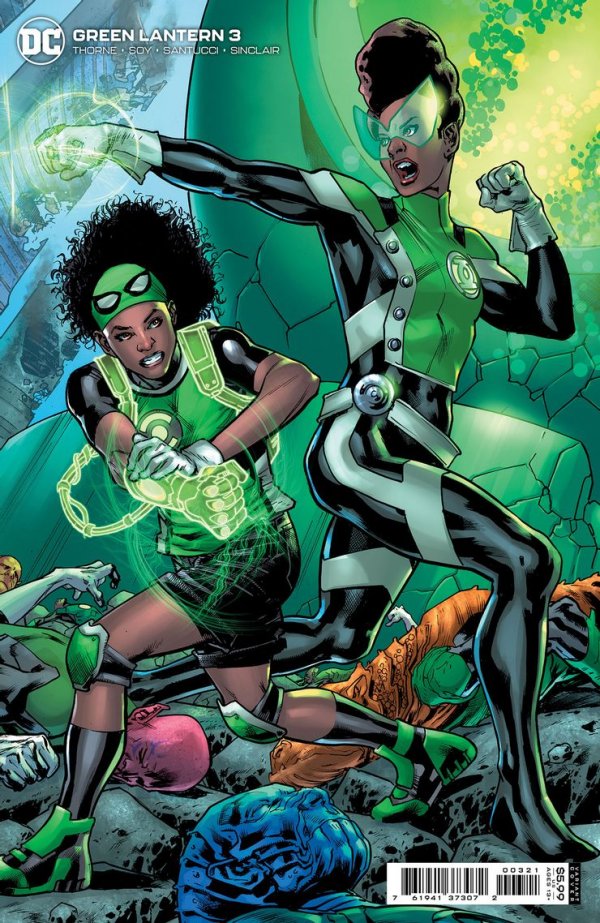 The issue ends with Jo Mullein on Oa doing what she can to pull things together.  While the John Stewart section of the issue is a more intimate look at a character, Jo’s section has a broader scope.  While it incorporates some nice one-on-one moments with both Teen Lantern and Simon Baz, the focus is really on Jo and her challenge to regroup what she can of the Corps and liaison with the United Planets.  Her own series, Far Sector, has yet to finish, but we know she’s facing a one-of-a-kind situation there and she is a solid choice to follow that up with this current challenge on Oa.

The final page depicts Jo’s message to Lanterns whose rings are still operational and receiving.  It should be no surprise that a familiar Lantern on Earth hears the message.  It’s teased well, but promises nothing.  One can only wonder what role he will play in the coming issues and how that will sit with Jo. 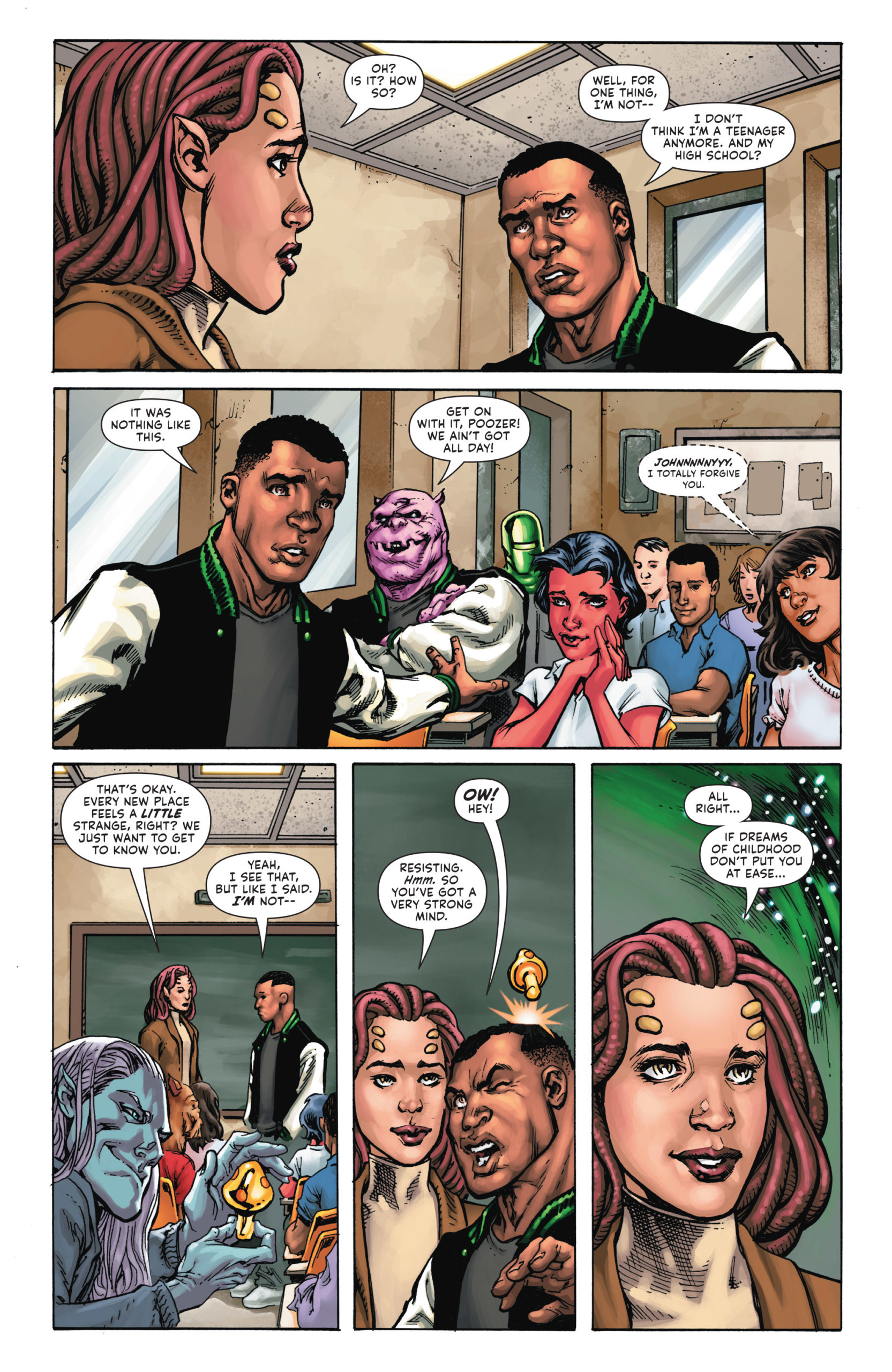 Nothing really negative here.  One wonders why Dexter Soy is not drawing this issue, but Tom Raney does a fine job filling in, if indeed it’s just a fill in.

Green Lantern #3 is a fun, interesting issue that echoes some well-loved science fiction, borrowing obliquely if not liberally.  Thorne is focusing on two characters that have very different challenges, but their particular stories seem to suit them.  Additionally, it’s a creative solution to addressing a concept and story that have such a grand scope.  This is a different direction for Green Lantern, but it’s interesting and feels both new and familiar all at the same time.