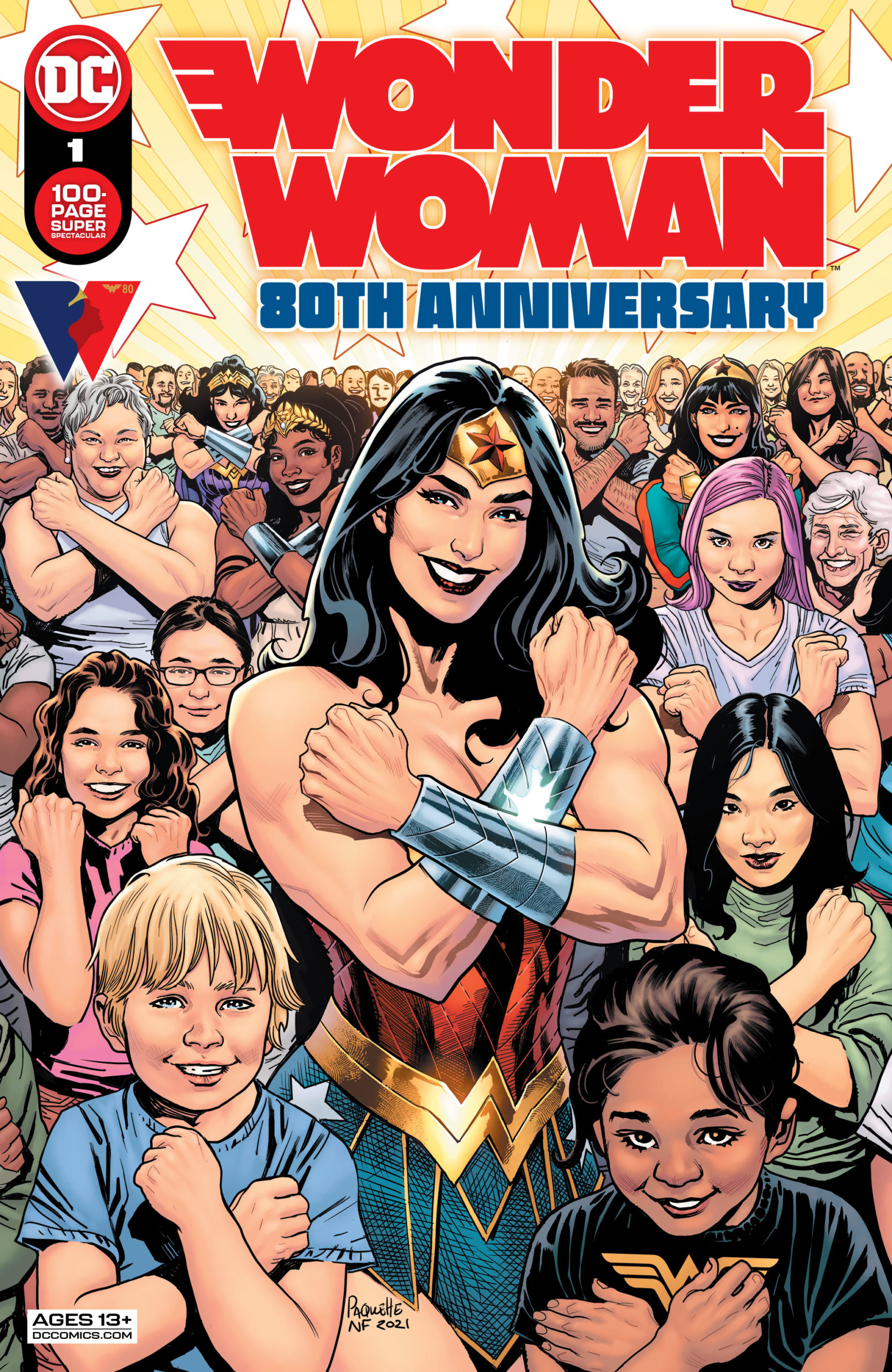 Celebrate 80 years of the Amazing Amazon a star-studded cast of creators in the Wonder Woman 80th Anniversary 100-Page Super Spectacular! 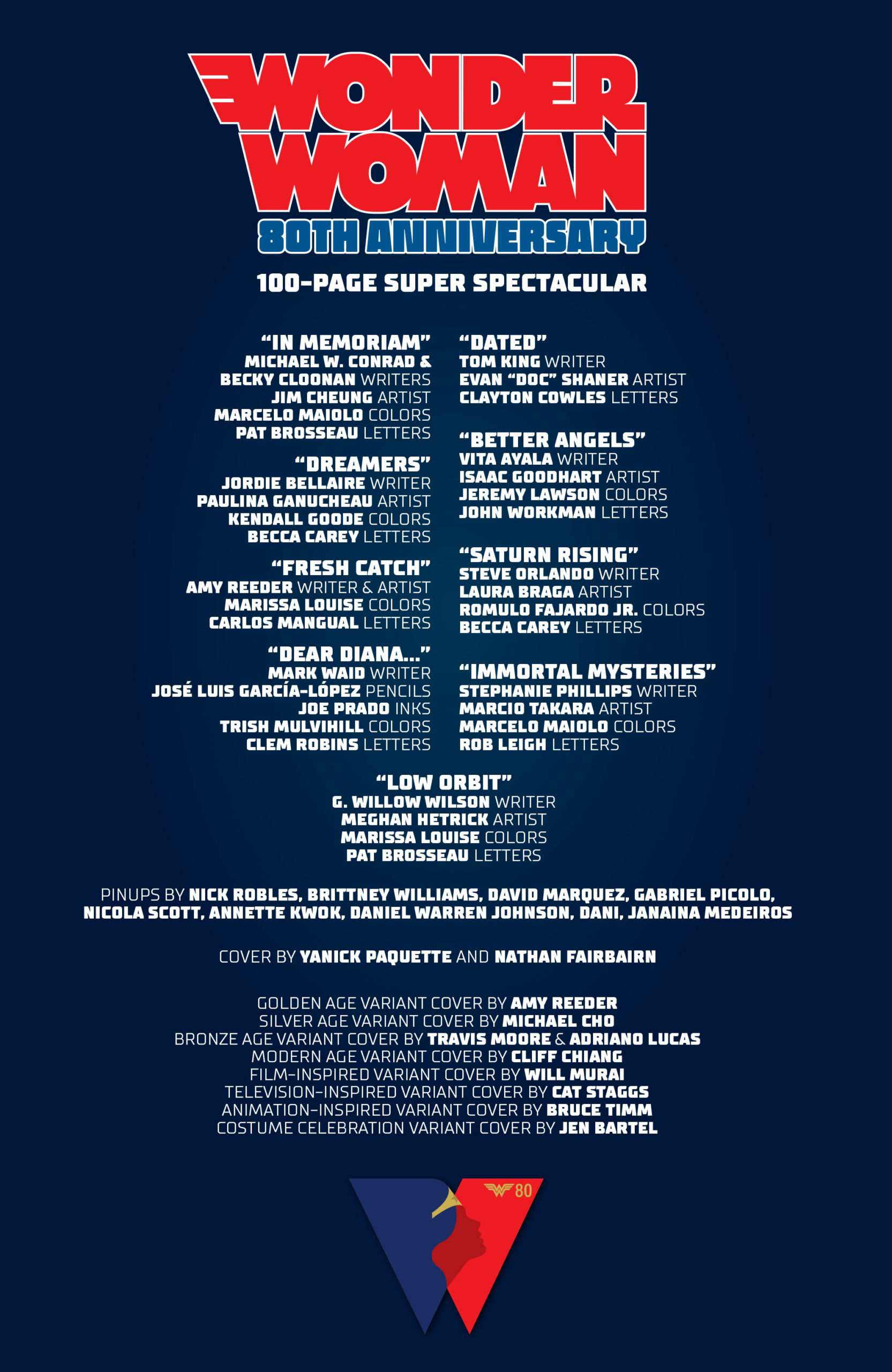 There have been a number of 80th Anniversary Super Spectaculars recently.  It’s to be expected a DC has passed the 80 year mark as a company and are hitting the anniversaries of their characters that originated in the Golden Age.  The Wonder Woman 80th Anniversary 100-Page Super Spectacular is one of, if not the best of the 80th Anniversary issues that DC has put out.  Each story not only captures the essence and substance of her character, but each story also invokes major nostalgia.  Wonder Woman has had many different types of stories over the years with different approaches to the character.  This issue does a marvelous job homaging those eras effectively and beautifully.  There isn’t a story that doesn’t hit the right notes, and the art is simply outstanding. 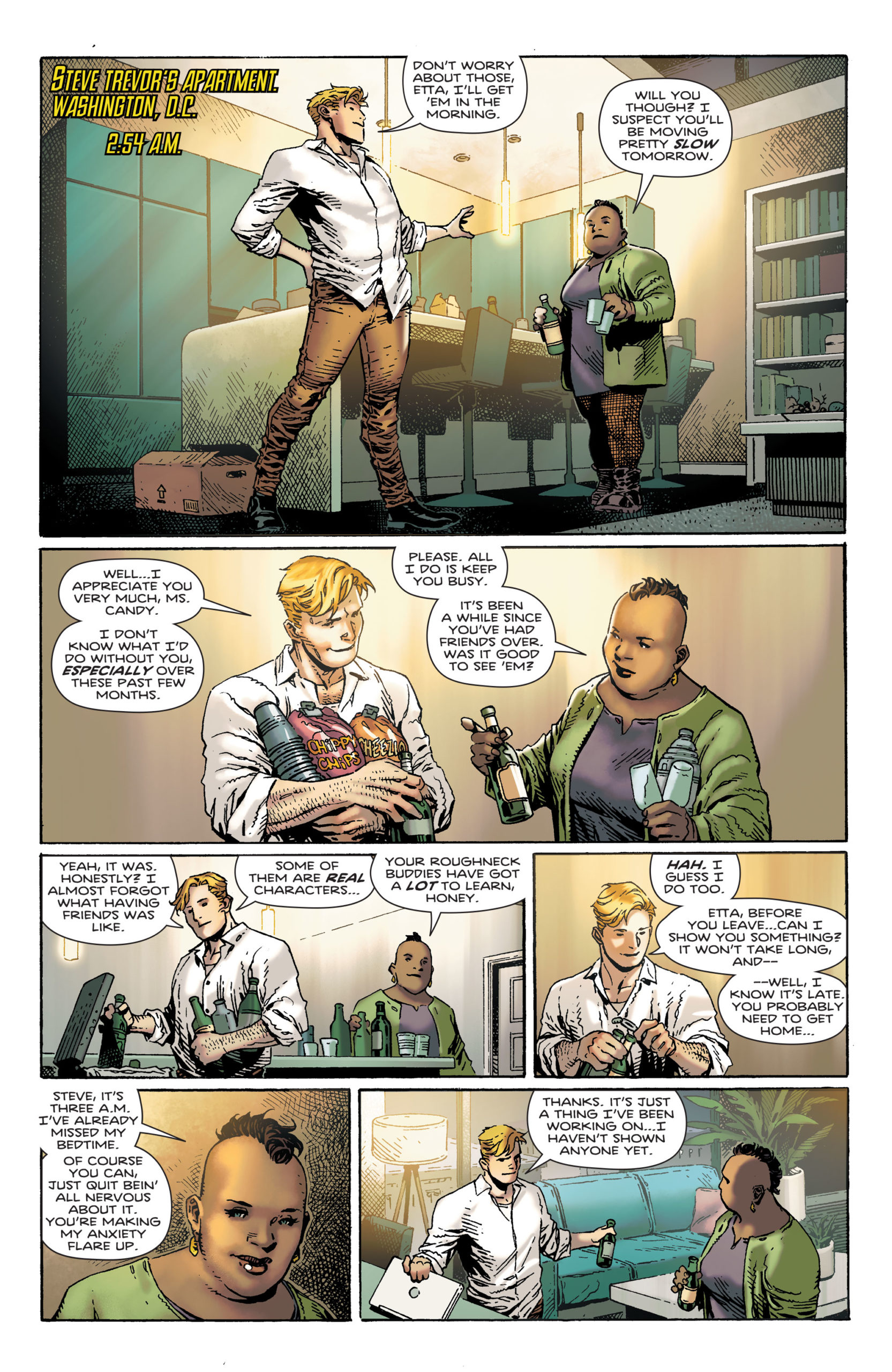 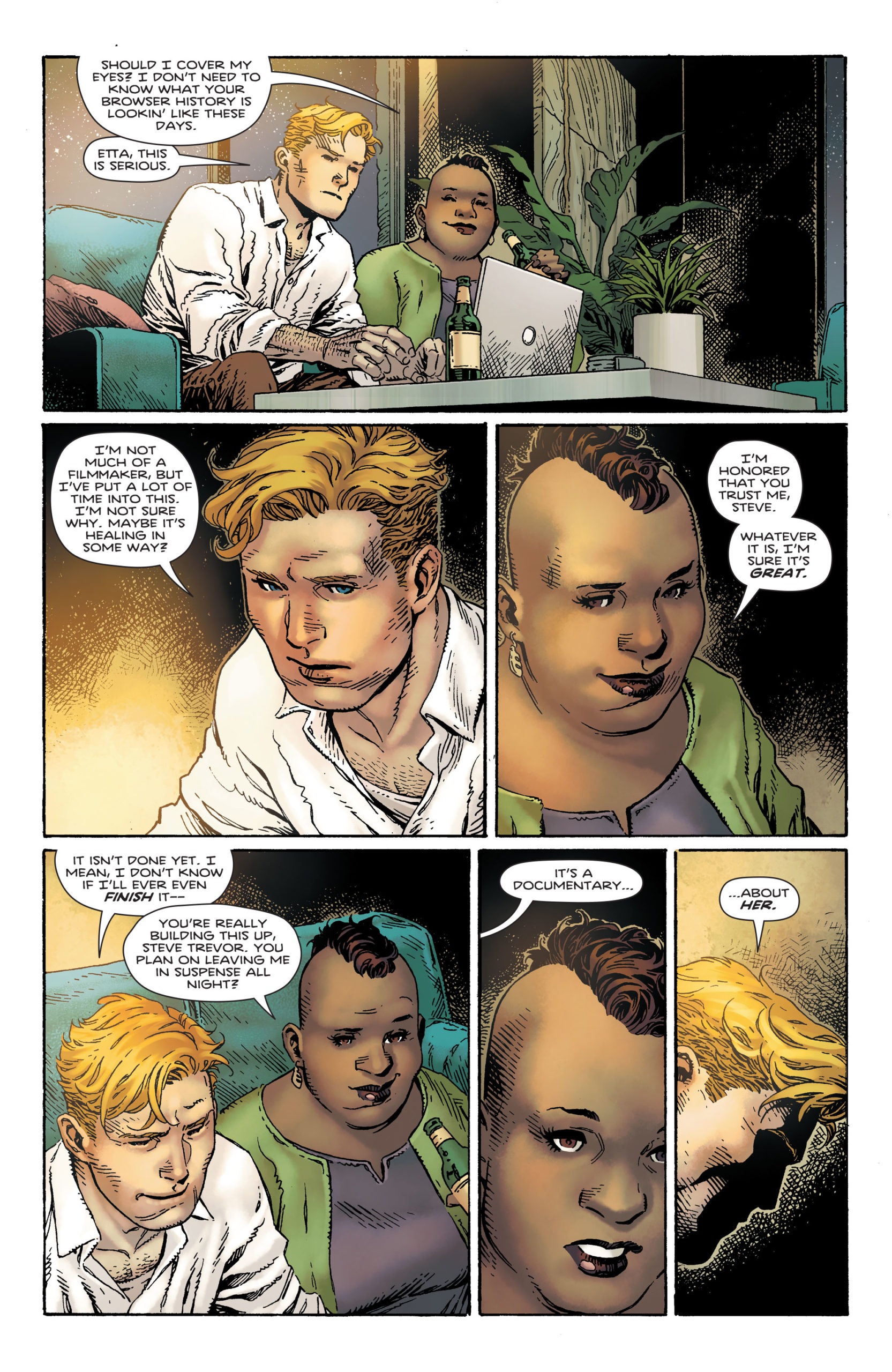 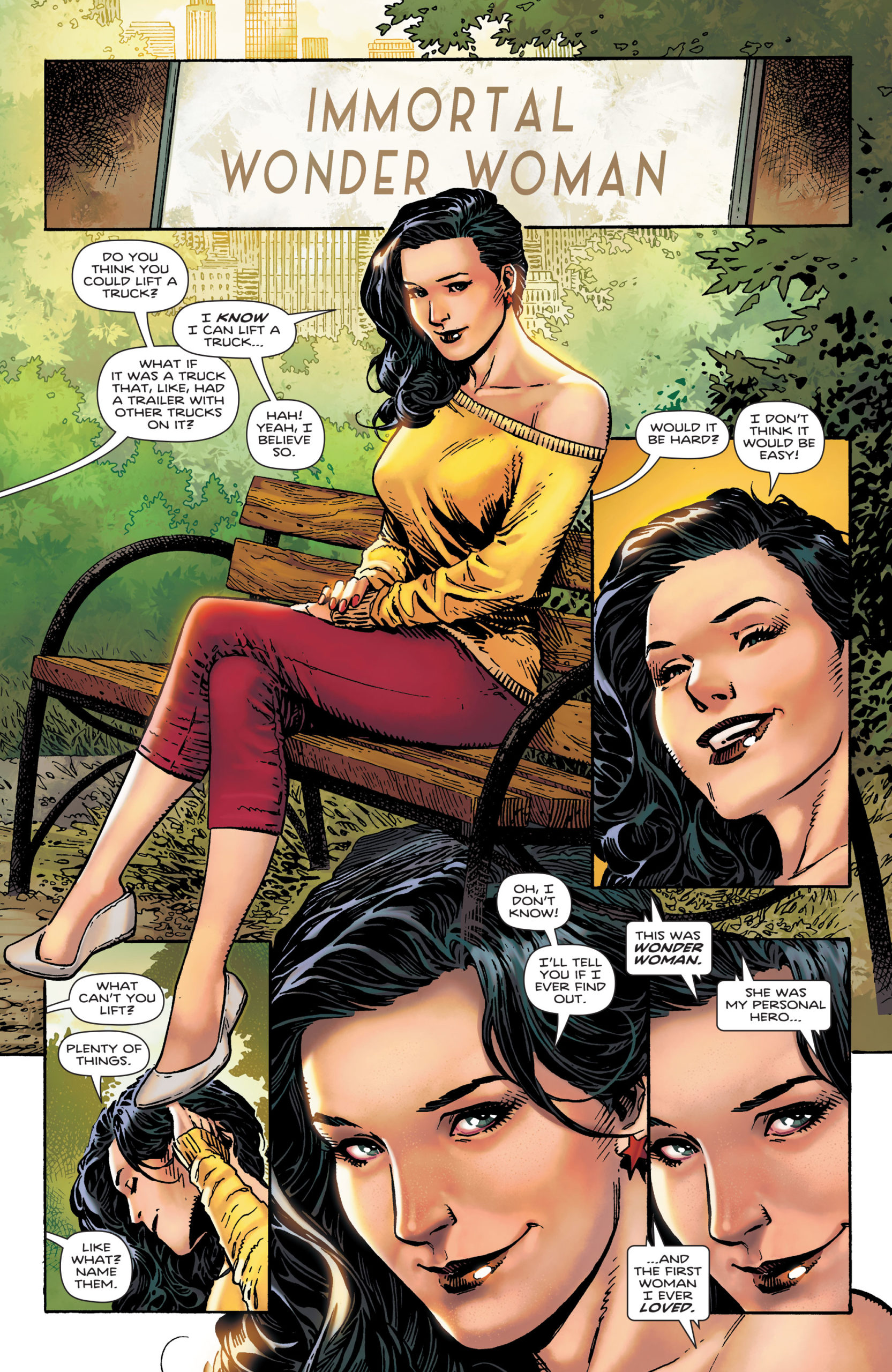 The issue opens with a story penned by current Wonder Woman scribes, Michael W. Conrad and Becky Cloonan.  This story while not only celebrating Wonder Woman’s character also fills in some of the emotional gaps.  I didn’t read Death Metal, so there was no real sense of Wonder Woman’s passing in the DC Universe for me.  It didn’t get the attention it needed to really sell the idea for the “Afteworlds” storyline that concluded in Wonder Woman #779.  This heartfelt tribute by Steve Trevor shows how her absence has affected the people in the DC Universe, especially Steve and Etta Candy.  It also serves as a perfect lead in to next week’s Wonder Woman #780.  Most importantly, the celebration of Diana really gets you emotionally, I was crying right along with Steve and Etta trying to hold back that lump in my throat.  This story will see how much you really love Wonder Woman as a character.  Jim Cheung’s art sells it as well, there’s no doubt Steve and Etta are overcome with emotion. 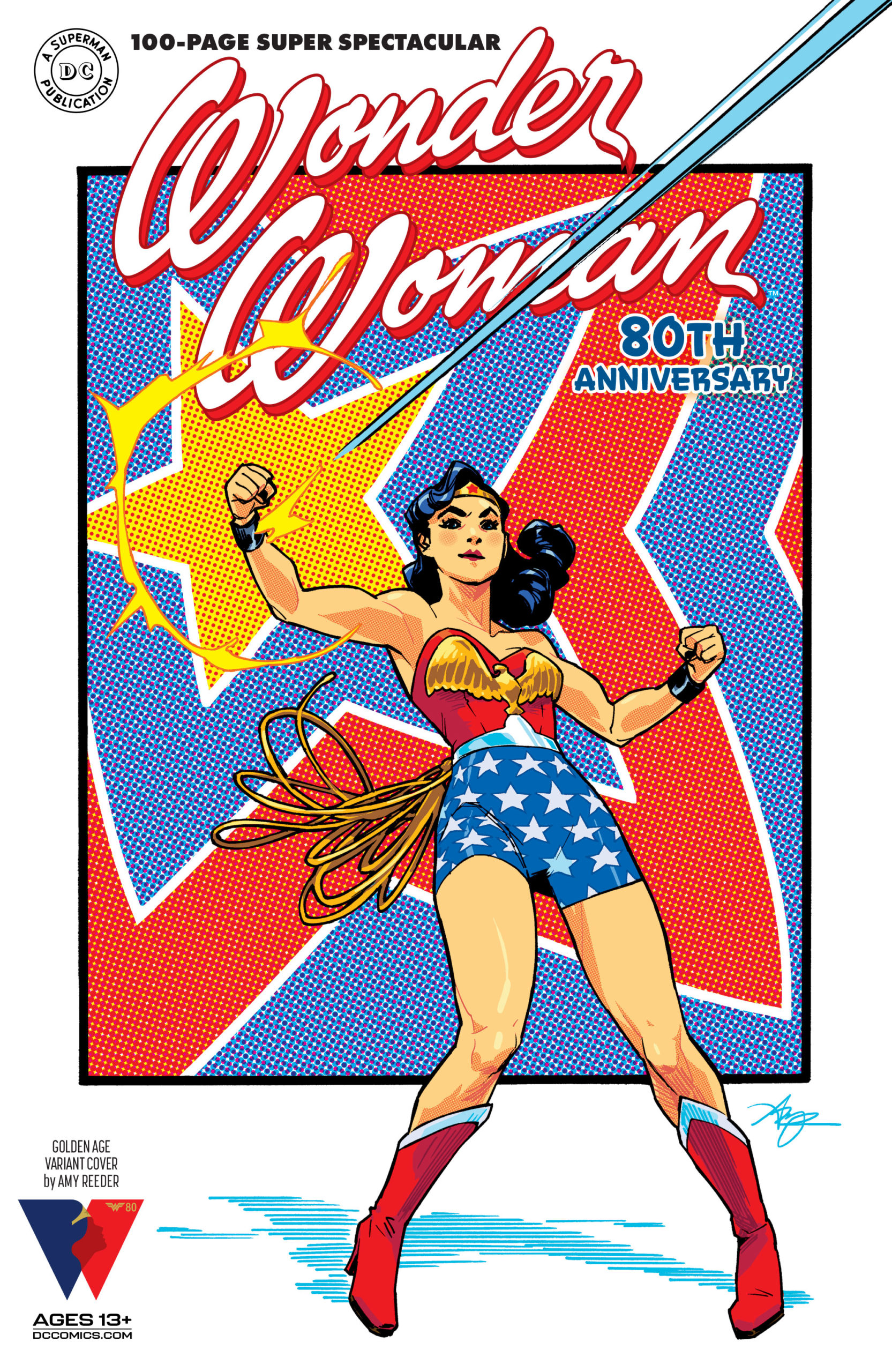 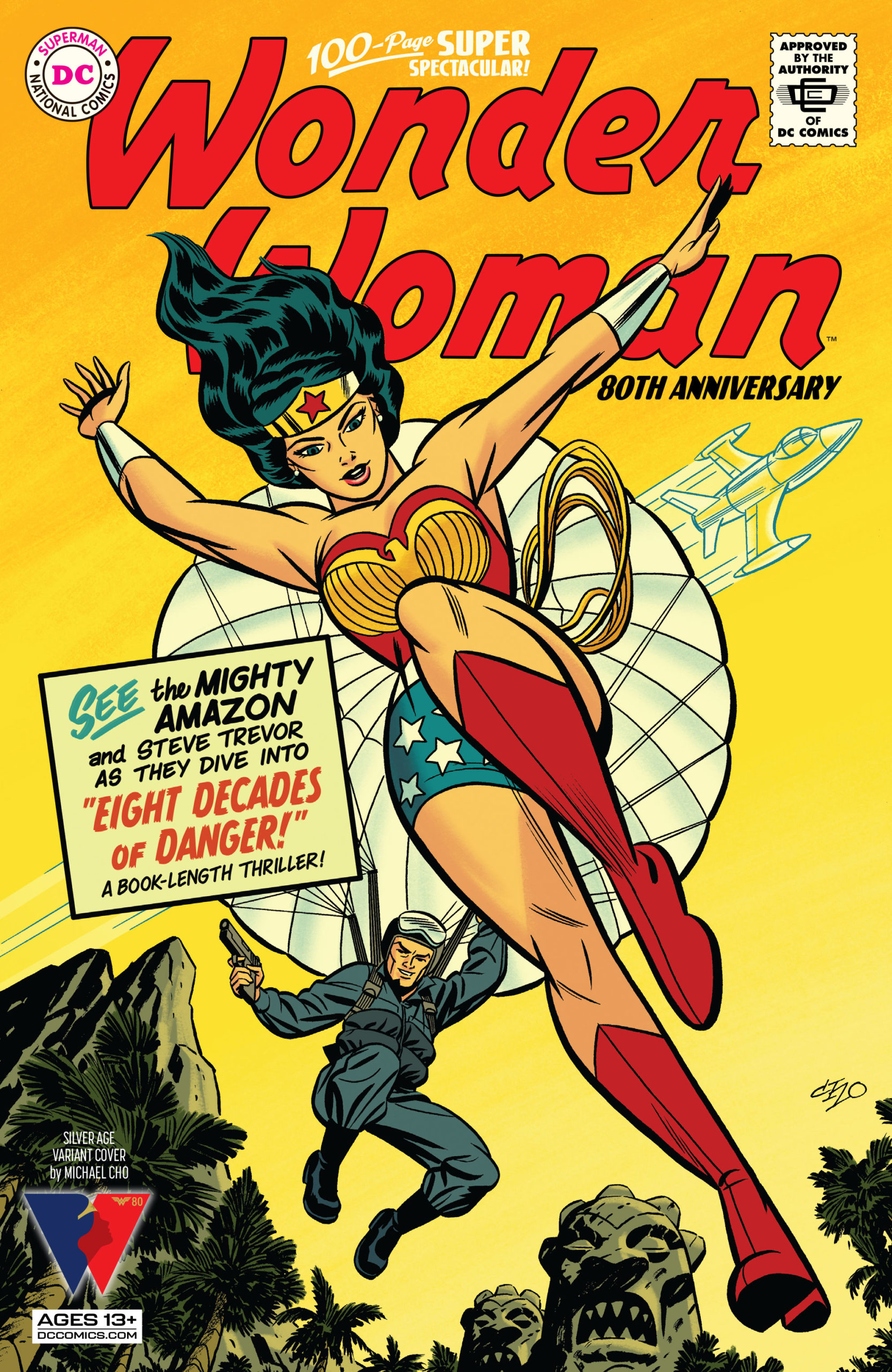 It’s hard not to examine each story individually, but a few deserve a close look.  “Fresh Catch” by Amy Reeder is an endearing take on the Golden Age Wonder Woman that features an appearance of the Holliday Girls.  These Golden Age supporting characters are the stars of this story as they show that all women are wonderful and capable and smart.  Led by Etta Candy (Etta is depicted as she originally appeared in the Golden Age), the Holliday Girls help free Wonder Woman from a trap before giving the bad guys more than they can handle.  Reeder not only writes a great story, but homages the Golden Age look of the characters without trying to copy original Wonder Woman artist H.G. Peter. 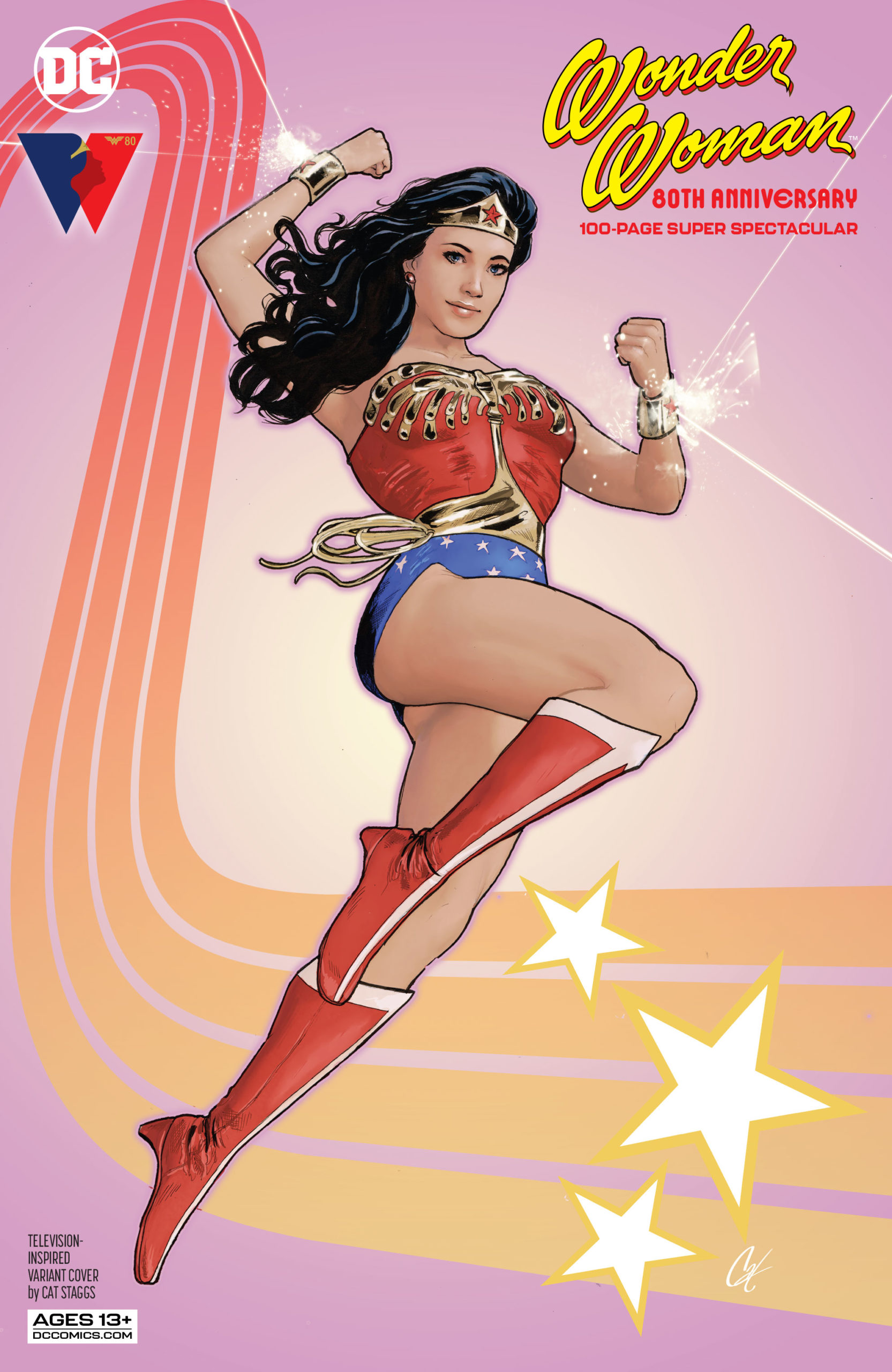 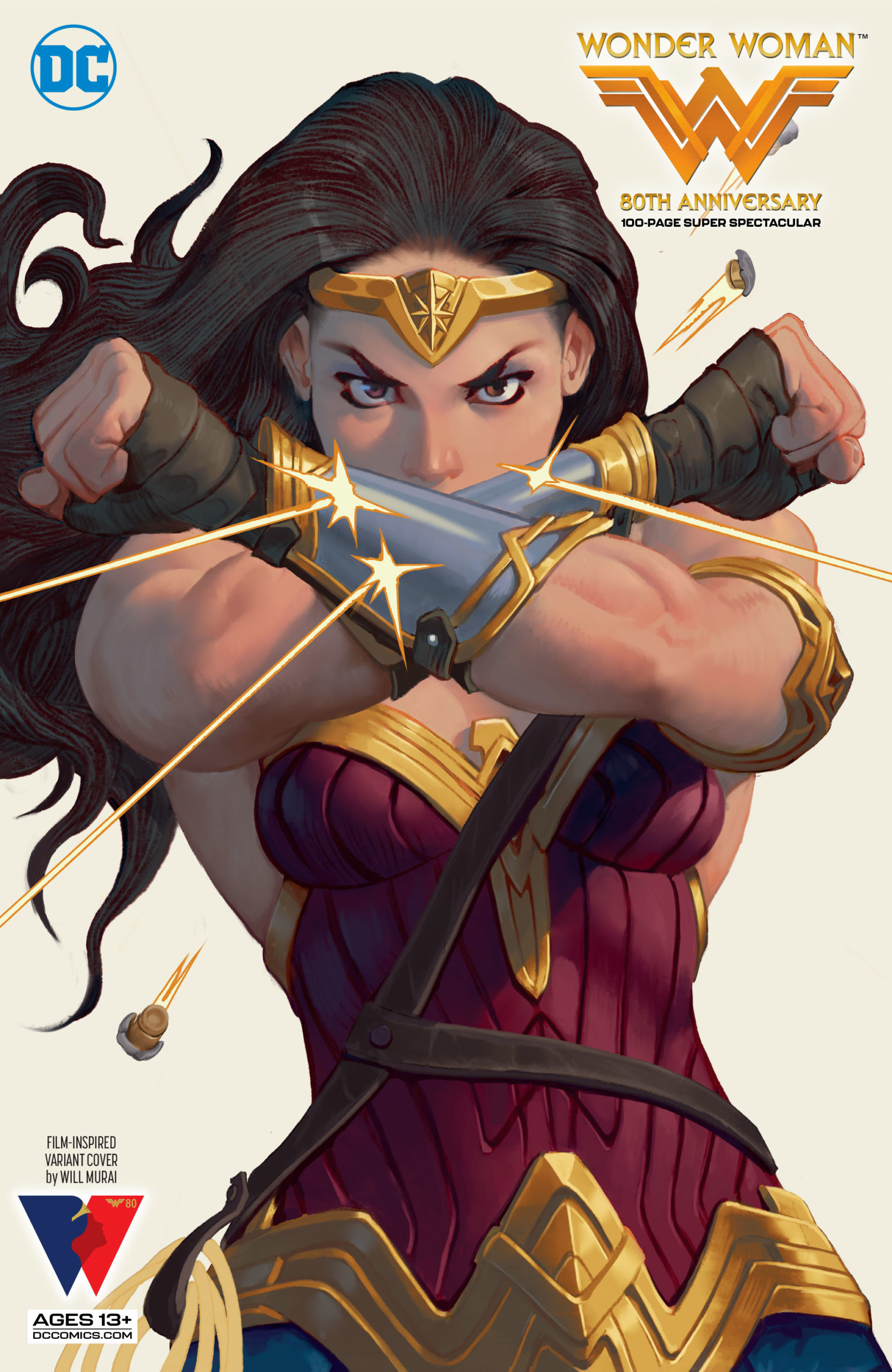 Mark Waid and Jose Luis Garcia-Lopez combine on a tale that explores Diana’s relationships with the members of the Justice League.  It’s a satellite era League and we can even tell about when it takes place based on the interaction between the Flash and Diana.  Waid gives us an intimate view of how Diana interacts with the League on a personal level, and it’s quite beautiful.  Garcia-Lopez’s art is gorgeous to look at.  He doesn’t try to evoke the look of the ’70’s- he IS the look of the ’70’s.  His staging and angles are perfect.  It’s great to see him drawing these characters and to be able to include the seldom seen Shayera Hol in her ’70’s appearance.

“Dated” by Tom King and Evan “Doc” Shaner take on the Mod Wonder Woman of the late ’60’s.  Shaner nails the look (can’t we get an ongoing from him!) and King provides a script that is all about the era.  It’s a Lois, Clark and Diana story that one could easily imagine happening.  What’s great is that King doesn’t beat around the bush- in this story it IS 1969, it’s not simply an homage, it fits right in with the zeitgeist as well as the Denny O’Neil/Mike Sekowsky Wonder Woman comics of the era.  I could read a series like this by this team all day.  C’est magnifique! 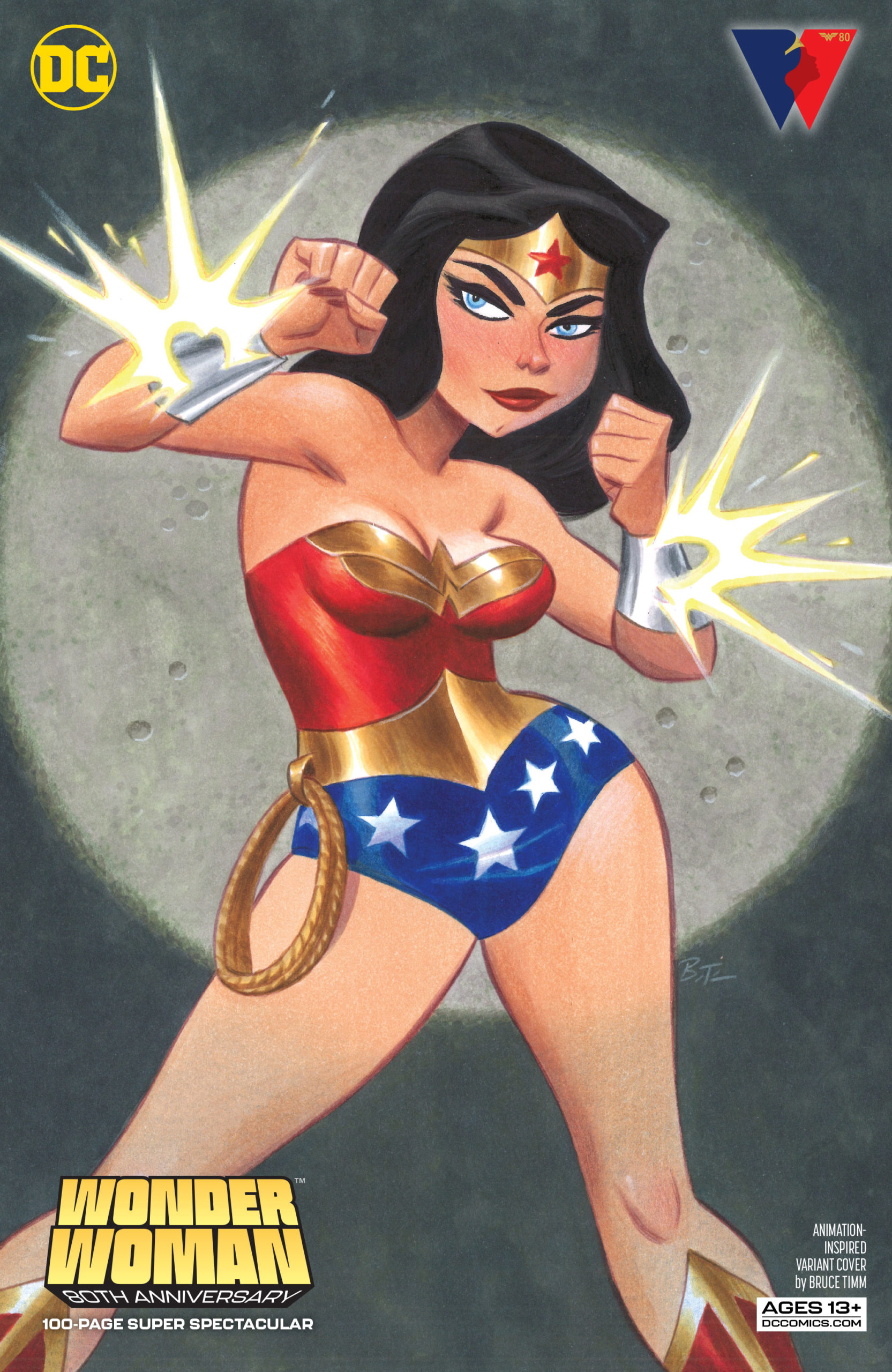 There’s also a story of Young Diana by Jordie Bellaire and Paulina Ganucheau that fits right in with the series they’ve been doing as the second feature in Wonder Woman.   Additionally, there are a number of pin ups in the issue that celebrate Wonder Woman and her supporting cast.  The one with Donna Troy, Cassie Sandsmark and Yara Flor begs for a story to be crafted around it. 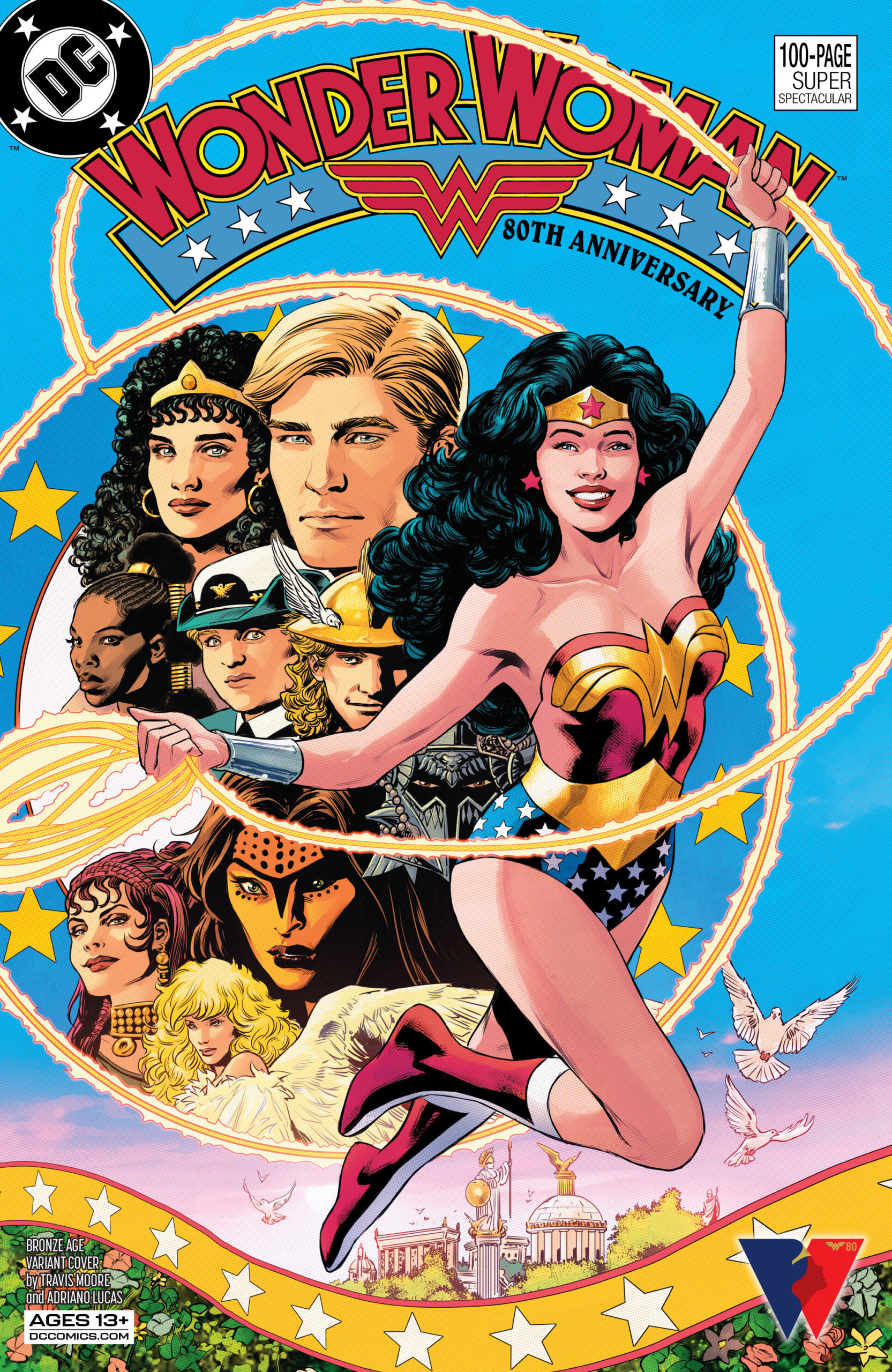 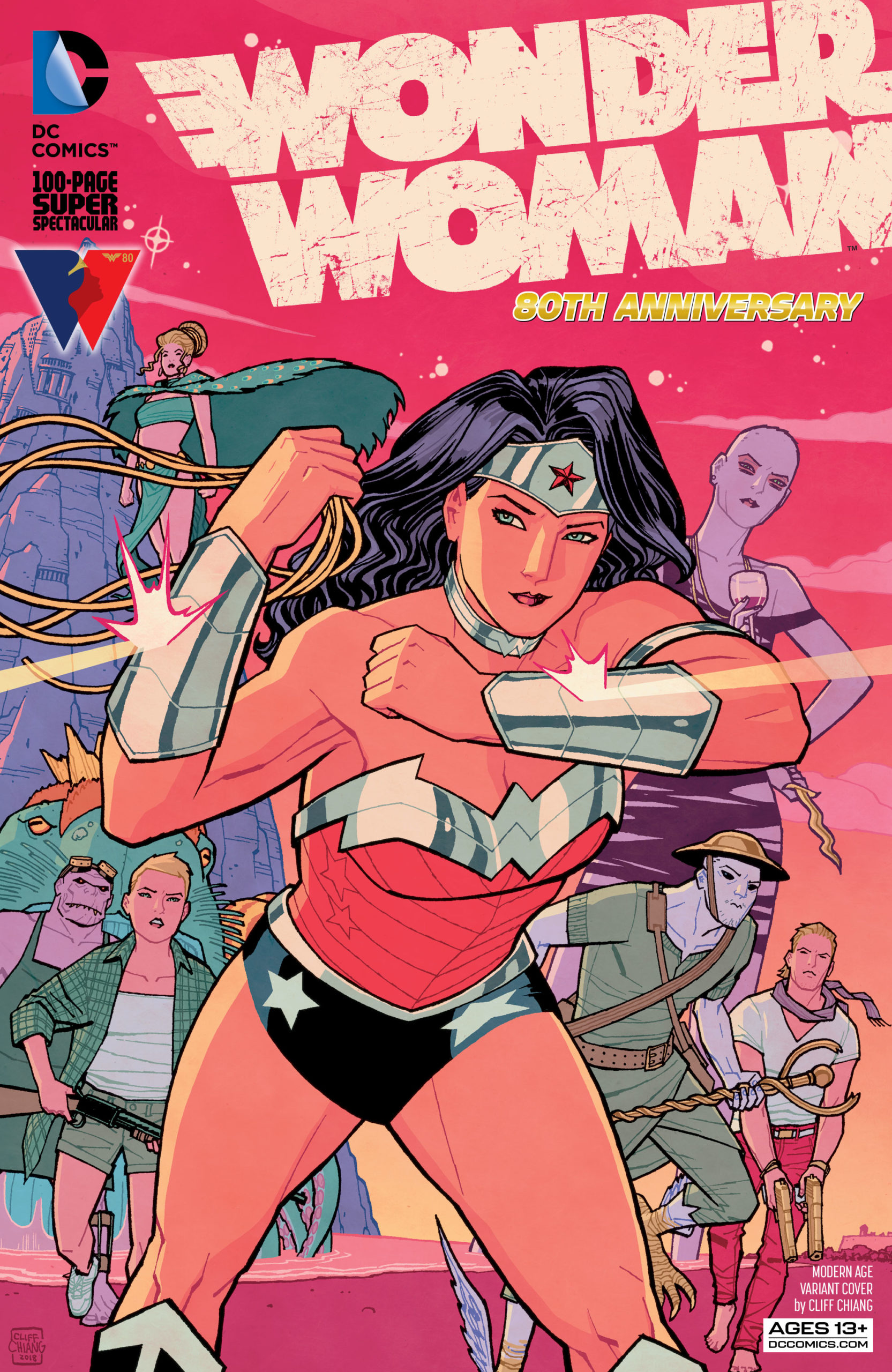 There are no negatives for the Wonder Woman 80th Anniversary 100-Page Super Spectacular, but I have no other place to put the following thoughts.  Much of the joy that comes from the issue is rooted in nostalgia for the different eras that are represented.  As a longtime reader and collector of comics and someone who’s read extensively on the character as well as the comics themselves, I wonder what it’s like for a newer reader to encounter these various interpretations of Wonder Woman?  If you’re not familiar with the The New 52 version, it might not even be obvious that “Immortal Mysteries” is a riff on that period.  And, certainly, the blonde Etta Candy we see in Reeder’s “Fresh Catch” differs greatly from the current iteration of Etta that’s in the lead story that is part of the current continuity.  To an old reader like me, it all works and I wouldn’t have it any other way, but what does a new reader think?

I guess the only real trouble is going to be deciding which cover to get if you can’t get them all….

You can’t go wrong with the Wonder Woman 80th Anniversary 100-Page Super Spectacular.  It’s wonderful in every way.  It’s an example of comics being fun and providing sheer unadulterated joy on every page.  Wonder Woman is the iconic female super-hero, and she will always be important.  Even if you don’t necessarily like her or her stories, one should at least understand her significance and respect that.  Diana easily has another 80 years in her, but this issue is a beautiful celebration of her first 80 years.  Need another 6/5 rating for this issue.

Review: Are You Afraid Of Darkseid? #1