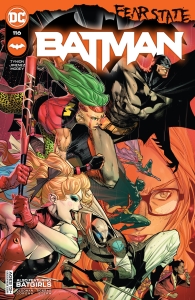 Batman #116: The only thing standing between an insane, heavily armed Peacekeeper-01 and a high body count in Gotham City is Batman. Their first bout didn’t go well for the Dark Knight, but the city is on the line and he can’t let the Scarecrow’s master plan come to fruition…and whose side is Miracle Molly truly on? The penultimate chapter of “Fear State”!

In Batman #116, we’re nearing the endgame of Tynion’s Fear State story. The Bat-family is fighting on several different fronts across the Batman books, with two main confrontations happening in Batman’s eponymous comic.

One of these battles occurs in Poison Ivy’s sanctum, as Ghost-Maker and Poison Ivy face a contingent of Magistrate forces. Although Ghost-Maker proves a match for the attackers, they still manage to achieve Simon Saint’s goal. The attack angers Ivy to the point where she decides to use her increased power to level Gotham City.

Luckily Harley Quinn and the Gardener arrive in the nick of time with the only person who can stop Ivy: Ivy herself. Well, actually it’s part of Ivy’s self, incarnated as a second Ivy. It will be interesting to see if the two Ivy’s will automatically merge into a whole Ivy, or if the two incarnations will have to battle each other. And if they do, which Ivy would become dominant?

We finally get to the main conflict: the confrontation between the Batman and Scarecrow. Batman and Miracle Molly arrive just as Crane is using the trauma stored in the Unsanity Collective’s Mind Machine on Peacekeeper-01. Crane believes this will force him to evolve into “the perfect leader t guide himself from this Fear State to a Future State of Gotham”. 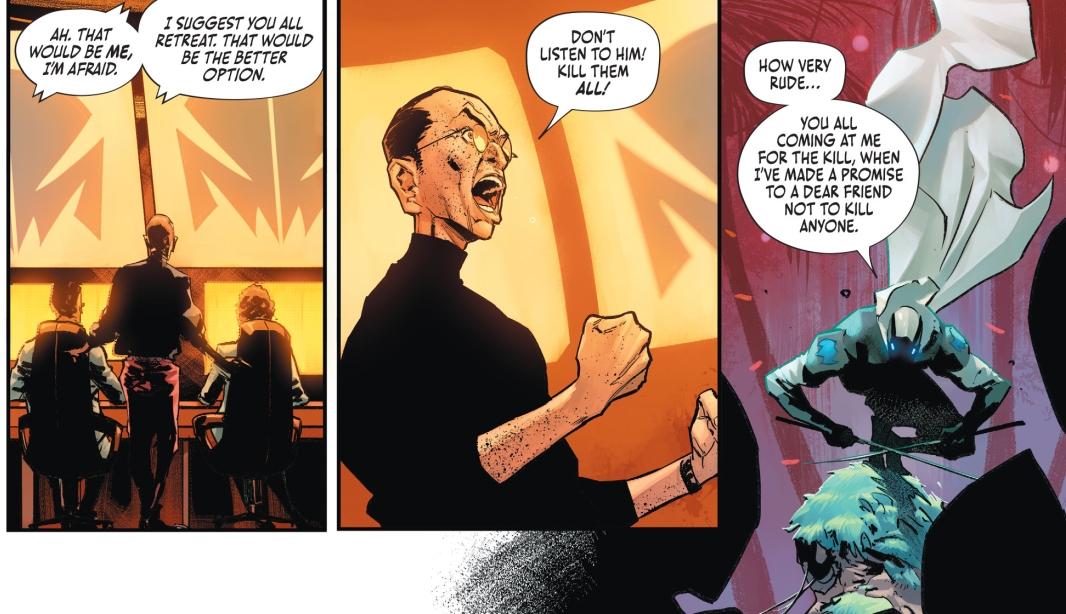 This bit of dialogue says more than Crane realizes. Tynion is clearly stating that his Fear State event is laying the seeds for the future Gotham City seen in the Future State titles. But can Batman stop that from happening? Batman fails to stop one important step as Crane’s conditioning of Peacekeeper-01 succeeds. And the transformed villain immediately shoots Scarecrow.

Peacekeeper-01 states that he might keep Scarecrow as his underling, “if he survived the shot, at least”, which hints that Scarecrow is possibly still alive. His appearance in Future State also implies his survival, so he’s probably okay.

But now the ultimate fight of the Fear State event begins: Batman vs. the evolved Peacekeeper-01. It’s unclear what advantages Crane’s process has given him. But combined with his physical enhancements from Simon Saint, he appears to be a formidable opponent for the Dark Knight. Unfortunately, we will have to wait until the next issue to see how the fight plays out, but it promises to be epic.

The backup story continues Becky Cloonan and Michael W. Conrad’s Batgirls story. Stephanie and Cassie are forced to flee the Clocktower when it’s assaulted by Magistrate forces. Shockingly, the Magistrate levels the Gotham landmark. It appears that the Batgirls will need a new base when their series launches. However, there is a mention of the officials having to “determine the extent of the damage to the treasured landmark”, so perhaps it can be repaired or rebuilt. 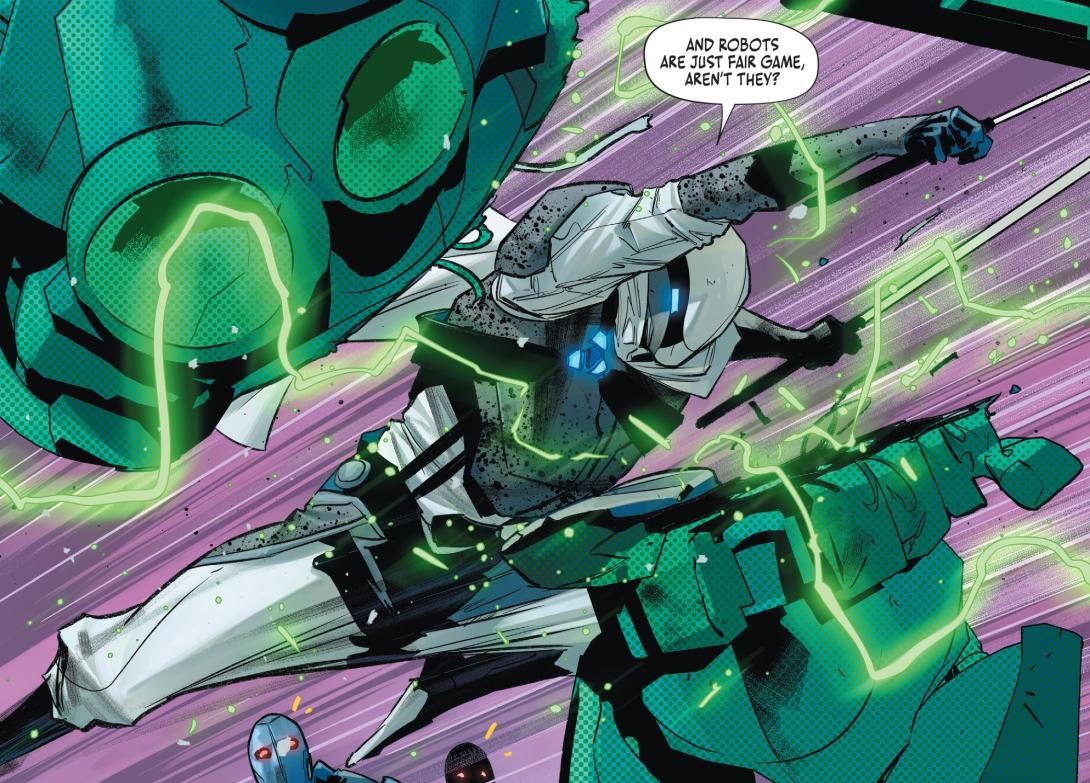 Also, the Batgirls find themselves branded as a domestic terrorist cell and heavily-armed extremists. Which in a strange way isn’t wholly inaccurate. The Bat-family does have some fancy weaponry, and they do terrorize criminals. But now they’re being accused of terrorizing Gotham’s citizenry – and the events of Fear State does have the city in a state of terror, which makes that lie believable to the populace.

So, Cassie and Stephanie find themselves fugitives, and without a safe haven to retreat to. This all has Stephanie distraught, but Cassie reminds her, “We’re still the flippin’ Batgirls. Always. We’ll figure it out”. I really like seeing the strong friendship that’s developing between these two bearers of the name Batgirl, and I look forward to their upcoming series.

So far, Fear State has Gotham City on track to become the Gotham we saw in the Future State event. While Future State gave us some interesting stories, I really don’t want that version of Gotham to become the new status quo of the Bat-family of books. At the moment, however, that future looks almost inevitable. I would much prefer that DC keeps Future State at arm’s length as a possible future, like the Batman Beyond future. I hope that we start seeing some indications that that dystopian future can be averted.

In Batman #116, Tynion has ramped up his story to a fever pitch and now we’re ready for him to bring it to a conclusion. I can’t deny that Tynion’s story has been exciting, but I’m not entirely comfortable with the course he has set the Gotham books on. Hopefully, Williamson and Tamaki can get things back on course after Fear State wraps up.