Joining the DC Animated Movie pantheon on May 3rd is Constantine: The House of Mystery, which may very well be our last chance to enjoy Matt Ryan as John Constantine in any form of media.

If you’re like me, then you love DC animated films. They’ve been able to tell stories that simply aren’t possible in live-action – and some would argue DC animation is superior to the live side of things. On that note, we can’t forget the wonderful Showcase shorts that have popped up over the years.

Normally, these short films focus on characters who aren’t always afforded headlining gigs. To name a few, Green Arrow, Catwoman, and The Spectre have wowed us in the past, complementing a feature-length film as part of its bonus features. But every so often WB drops a home video release with a longer short anchoring a compilation of recent Showcases, such as Superman/Shazam: The Return of Black Adam and Batman: Death in the Family.

To sate your desires, check out the trailer below:

For more info, check out the full press release:

Warner Bros. Animation continues to glean beloved characters from DC’s robust library for the popular DC Showcase line of animated shorts, this time opting to elevate Constantine, Kamandi, The Losers, and Blue Beetle in the 2021-2022 compilation release, DC Showcase: Constantine – The House of Mystery. The R-rated shorts collection will be available from Warner Bros. Home Entertainment on Blu-ray (USA $24.99 SRP; Canada $29.99 SRP) and in 4K on Digital starting May 3, 2022.

While Kamandi: The Last Boy on Earth!, The Losers and Blue Beetle have all appeared as enhanced content on past DC Universe Movies, the extended-length Constantine – The House of Mystery makes its public debut as the anchor for this dynamic shorts compilation.

Matt Ryan (Constantine, Legends of Tomorrow) reprises his live-action and animated role as the Hellblazer himself in Constantine – The House of Mystery. In the all-new short, John Constantine wakes up in the eerie House of Mystery with no recollection of how he got there. Fortunately, Zatanna and his friends are all there. Unfortunately, they have a bad habit of turning into demons and ripping him to shreds, over and over again! Camilla Luddington (Grey’s Anatomy) and Ray Chase (Licorice Pizza) reprise their roles from Justice League Dark: Apokolips War as Zatanna and Jason Blood/Etrigan, respectively, while Robin Atkin Downes (The Strain) and Damian O’Hare (Pirates of the Caribbean: The Curse of the Black Pearl) reprise their roles from Constantine: City of Demons as Negral and Chas, respectively. In addition, Grey Griffin (Scooby-Doo franchise) and Lou Diamond Phillips (La Bamba, Longmire, Young Guns) join the cast of the short, which is directed by Matt Peters (Injustice) from a script by Ernie Altbacker (Batman: Hush).

Also included in the animated shorts collection are:

KAMANDI: THE LAST BOY ON EARTH!

Directed by Matt Peters (Justice League Dark: Apokolips War) from a script written by Paul Giacoppo (Young Justice, Star Wars: Resistance), Kamandi: The Last Boy on Earth! was initially released as a bonus feature on Justice Society: World War II in Spring 2021. Jack Kirby’s beloved DC comic creation features the last civilized teenage boy on a post-apocalyptic Earth ruled by talking animals. In this short, Kamandi and his friends Prince Tuftan of the Tiger Kingdom and humanoid mutant Ben Boxer are kidnapped by a gorilla cult dedicated to finding the reincarnation of their god, The Mighty One. Golgan, the cult’s leader, puts Kamandi’s team through a series of deadly tests to find if any of them know the secret of The Mighty One. The thriller features the voices of Cameron Monaghan (Gotham, Shameless) as Kamandi, Steve Blum (Star Wars: Rebels, Cowboy Bebop, Naruto franchise) as Golgan & Tuftan, Adam Gifford (Masters of the Universe: Revelation) as Zuma, and Armen Taylor (Justice Society: World War II) as Ben Boxer.

The legendary rag-tag team of World War II outcasts – Captain Storm, Johnny Cloud, “Mile-a-Minute” Jones, rookie Gunner and Sarge – find themselves marooned on an uncharted island in the South Pacific that is completely overrun with dinosaurs! Their would-be ally on this deadly mission, the mysterious and beautiful Fan Long of the Chinese Security Agency, tells them their job is to rescue the scientists that have been sent to study a time/space anomaly. Perhaps… but what is her mission?  Ming-Na Wen (Agents of S.H.I.E.L.D., The Book of Boba Fett) leads the cast as the mysterious Fan. Along for the journey is Dean Winters (John Wick, 30 Rock) as Captain Storm, Dave B. Mitchell (Mortal Kombat Legends: Battle of the Realms) as Gunner & Sarge, Eugene Byrd (Bones, Arrow) as Mile-a-Minute Jones, and Martin Sensmeier (Westworld, The Magnificent Seven) as Johnny Cloud. Initially included as a bonus feature on Batman: The Long Halloween, Part One, The Losers is directed by Milo Neuman (LEGO DC Comics Super Heroes: The Flash) from a script by Tim Sheridan (Batman: The Long Halloween).

Sufferin’ Scarabs! Silver Age Blue Beetle is back! And had he ever starred in a 1960s Saturday-morning limited-animation cartoon with its own jazzy earworm of a theme song, it would have been just like this short! Welcome to the adventures of Ted Kord, alias the Blue Beetle, as he teams up with fellow Super Heroes Captain Atom, The Question and Nightshade to battle that nefarious finagler of feelings, Doctor Spectro. Matt Lanter (Timeless, Star Wars: The Clone Wars, 90210) stars as Blue Beetle alongside Jeff Bennett (Johnny Bravo, Curious George) as Captain Atom & Pops, Ashly Burch (The Ghost and Molly McGee) as Nightshade, David Kaye (Last Week Tonight with John Oliver, He-Man and the Masters of the Universe) as The Question, and Tom Kenny (SpongeBob SquarePants) as Dr. Spectro. Originally attached to Batman: The Long Halloween, Part Two, Blue Beetle is directed by Milo Neuman (Freedom Fighters: The Ray) from a screenplay by Jennifer Keene (Phineas and Ferb) based on a story by Jeremy Adams (Mortal Kombat Legends franchise).

DC Showcase: One Story at a Time (New Featurette) – Since the 1993 debut of Batman: Mask of the Phantasm, Warner Bros. Animation has revolutionized and mastered the feature film world with their critically successful DC Universe Movies and DC Animated Movies. In 2010, the creative team hit upon the idea of presenting some of the more under-utilized DC characters in shorter stories – and thus, the DC Showcase was born. The shorts program has provided a fertile venue for creators and animators to explore the vast array of DC’s diverse heroes, worlds and universes, and gives audiences a taste of their infinite possibilities. Featuring some big names as well as the deeper cuts, these short films reflect different styles and sensibilities, and are inspired by renown creators like Jack Kirby, Steve Ditko and Alan Moore. This documentary takes a look at the roots of DC Showcase – from Catwoman and Sgt. Rock to Death and Superman/Shazam: The Return of Black Adam, as well as the current quartet of shorts. Included are interviews with producer Rick Morales and directors Matt Peters & Milo Neuman as they explore the featured heroes and villains, the comics that inspired them, and these adventures’ place in the bigger picture of the DC animated universe. 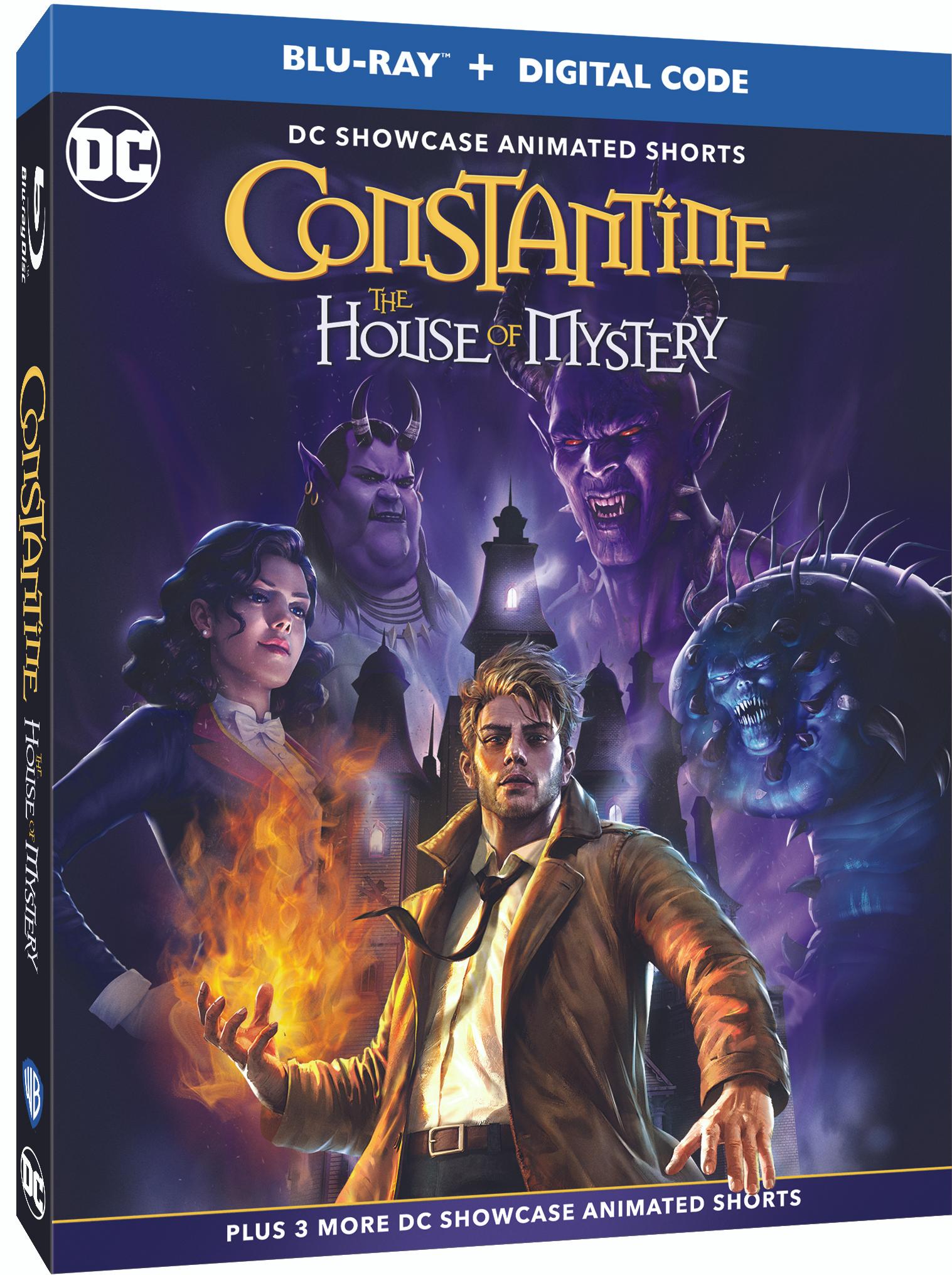