Fans of DC shows have a lot to thank Smallville for. If it wasn’t for the “no tights no flights” show we may not have an Arrowverse today. It says a lot that the show lasted 10 seasons from 2002 to 2012.

Attendees of this year’s NYCC got a treat as the cast of the WB show reunited for a panel on the main stage. The panel included Tom Welling (Clark Kent), Erica Durance (Lois Lane, Kristin Kreuk (Lana Lang), and John Glover (Lionel Luthor). 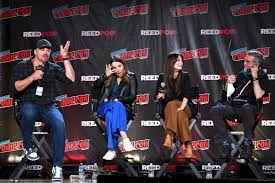 Although some of the actors have had roles or had cameos on other Arrowverse shows, Welling may be the closest to his memories of the show. He co-hosts a podcast with Michael Rosenbaum, who played Lex Luthor in the series.  “The more that time passes, the more I appreciate it” Welling said. Rosenbaum came up a lot during the panel with cast members sharing stories of him on set.  Welling recounted a  short scene where Lex, as President, was to read two pages of a bad speech. Rosenbaum felt they “weren’t going to use it” anyway so he didn’t want to rehearse. When it came time to shoot, the cameras rolled and all Rosenbaum said, “Where are the teleprompters?” You’d think the actor would have memorized the speech, right? Wrong!  “I’m the president!” he said. “I didn’t memorize that s**t, I was just gonna read it,” Welling said that he went off for 10 minutes and did what he could.  Both Durance and Glover talked of their frustration with Rosenbaum, but they assured the audience that they “still love him”

Glover wasn’t supposed to be such a big part of the show. The cast and fans of the show liked him so much he was given for the second season.  Kreuk’s memories are more fear-based. “I was so scared most of the time. I was terrified for the beginning of that show,” she said. “In that fear state, there isn’t a lot I remember.”

Welling insisted on no flights no tights so much so that he had to contact attorneys to make sure it never happened.  “We wouldn’t have lasted 10 years if we’d put the suit on in Season 1,” Welling said.

The Panel did a great job of showing another reason the show lasted as long as it did.  They are all good friends. Not surprisingly, Alison Mack was not mentioned.

New Comics And Direction Revealed For Superman Books At NYCC 2022

Changes For Shazam, Martian Manhunter And Others Teased in Recent DC Poster