Batwheels was out in full force for NYCC 2022! First with the Gotham City Raceway, a track with Fisher Price Power Wheel trucks for the kids to ride! Needles to say on Sunday (kids day) the line was very long!

Next up was a panel where cast members of the popular new animated show shared experiences and excitement over being part of the Bat universe. 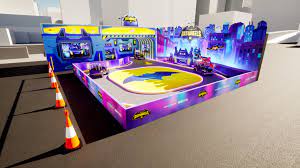 The group reflected on both being true to the legacy of the Bat characters, but also how fun it was to blaze a new trail. Jacob Bertrand also reflected on how cool it was to be the first voice ever for the Batmobile. A few clips were shown including almost a full episode where Bam and Redbird learn the importance of preparedness and giving someone a chance.

Chances are, if you’re a DC fan and have young kids, they’ll be watching this. It’s great to know that the lessons they take away will be good ones.