Batman: The Audio Adventures had a panel at this year’s NYCC! Stars Jeffery Wright and Bobby Moynihan were joined by writer/producer Dennis McNicholas to talk about the second season of the popular scripted podcast, that debuted on Oct 7th, so it’s very fitting that there would be a panel to promote it. 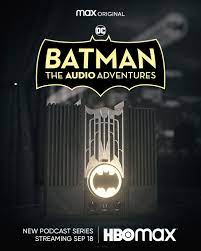 The second season of Batman: The Audio Adventures has been described as:

“Gotham City’s cauldron of crime and corruption is about to boil over. While The Joker remains at large, criminal kingpins and former rivals The Penguin and Two-Face have joined forces – and the mysterious narco-terrorist known as Scarecrow remains unidentified, even as his chemical nightmares plague the city.

The schism between Batman and Catwoman grows ever larger as both escalate their separate wars on crime, threatening dire consequences for both.

Harleen Quinzel (aka Harley Quinn) is living for a love that’s slowly killing her, just waiting for inspiration to strike.

In the new miniseries, a string of attacks has plagued Gotham’s seedy underbelly, sending criminals into a panic, but it’s not Batman who is striking the heart of the city — it’s a group of mysterious assailants on the hunt for an ancient artifact.

As Batman hunts down the assassins, he finds clues that keep drawing him to their true goal: the sword of King Scimitar.”

We didn’t get much more than that from the tight-lipped panelists, though they did play a few clips. Judging by what we heard, this season will be as funny and exciting as the first.

One thing everyone on the panel could agree on is what an honor it is to be involved with the Batman universe. Moynihan said he was more nervous playing the penguin than any other role he’s ever taken. McNicholas also shared how seriously he took the story.

Jeffery Wright reminisced about all the time he has spent in the bat world. His time playing James Gordon in The Batman and reading comics really helped him in creating this version of Batman. If you haven’t already, you really need to check out this podcast.