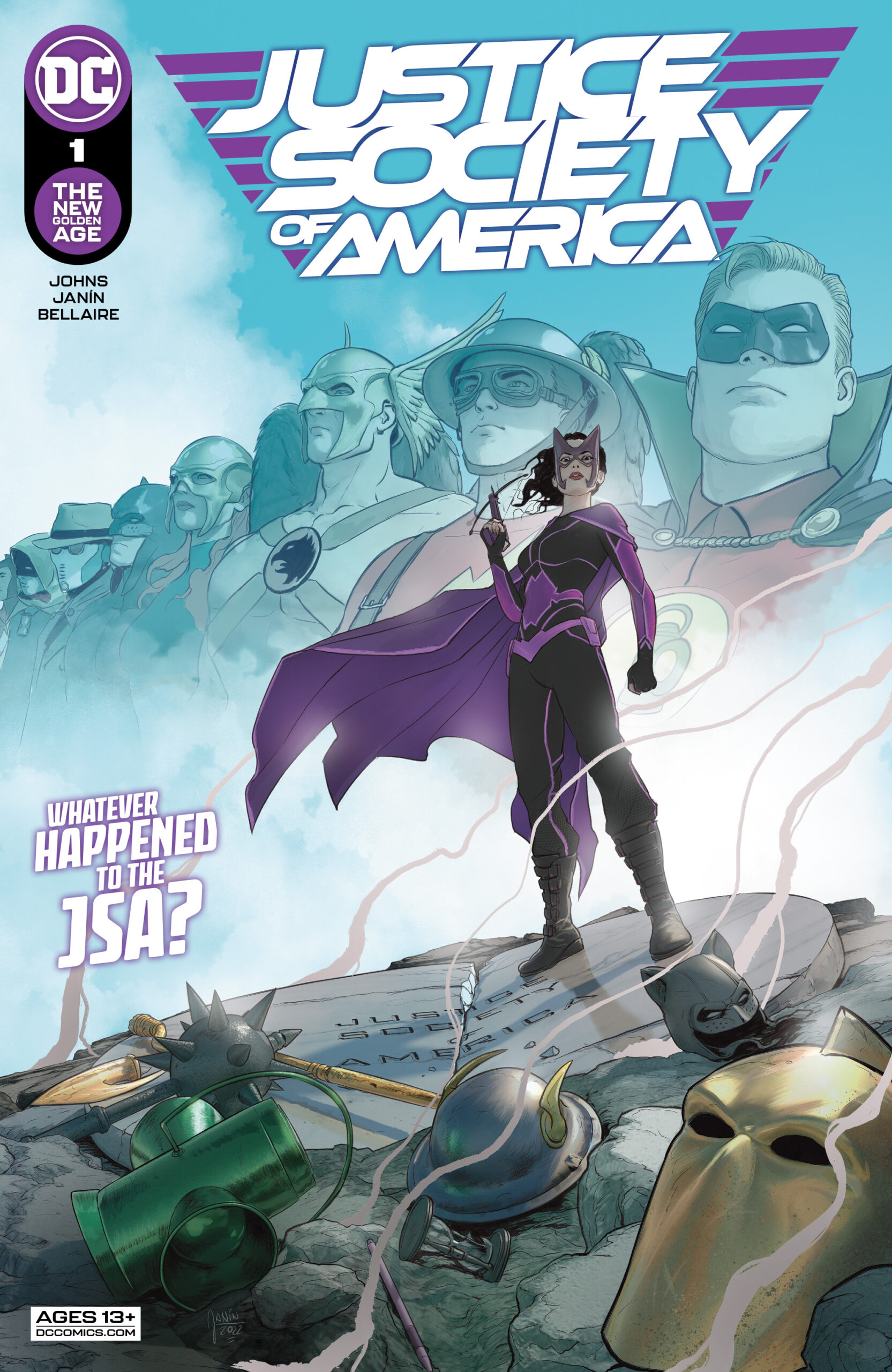 Helena Wayne, the Huntress is leading the JSA as an adult and she’s having some problems with membership.  After the murder of Khalid Nassour, Dr. Fate it gets even worse…  The villain stands revealed, but do you know his identity?  He’s not washing test tubes any longer… 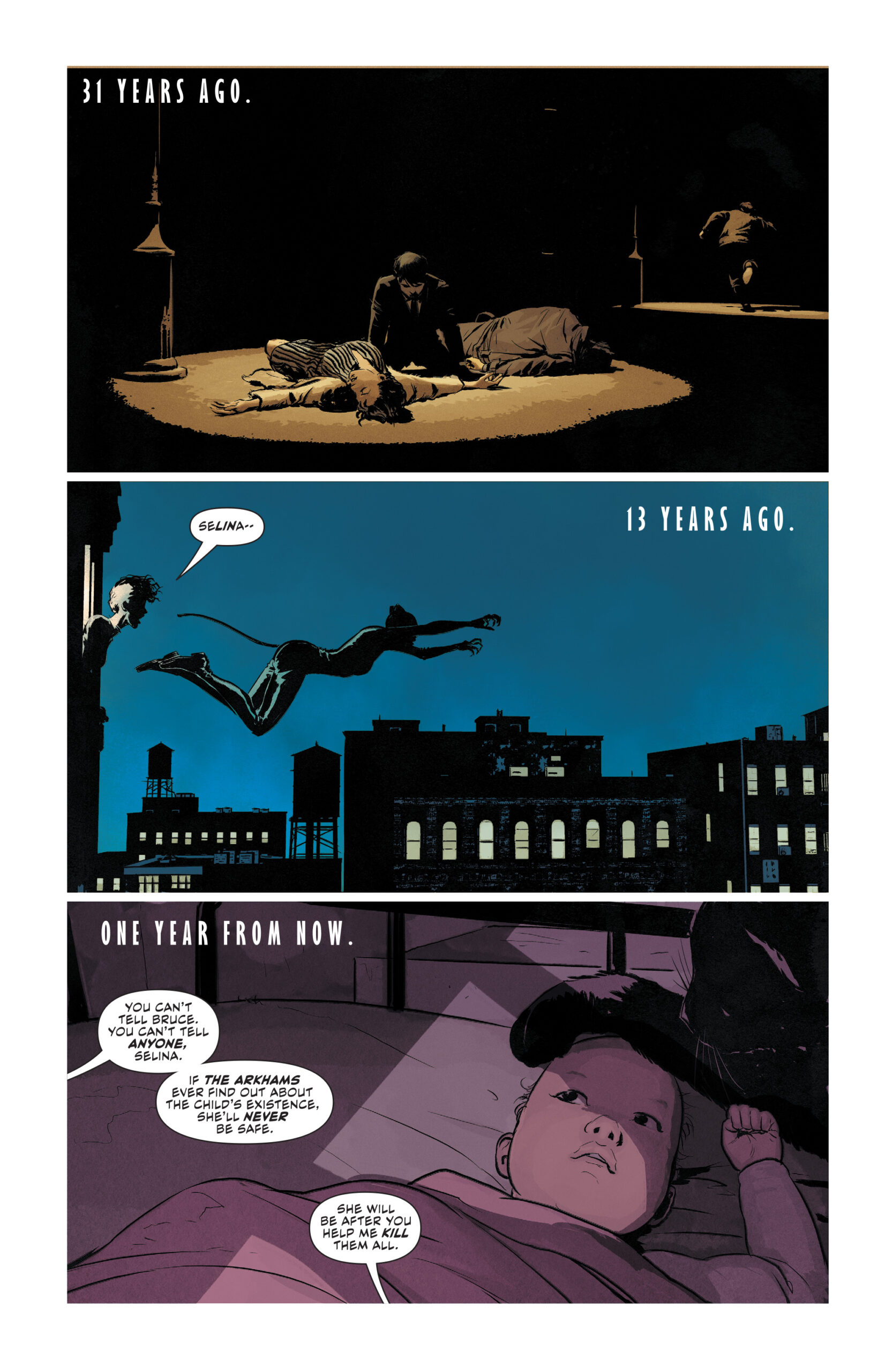 Since the publication of Crisis on Infinite Earths #11 (February 1986), I’ve been crying along with Helena, Dick and Karen for the loss of the original Earth-Two in DC Comics continuity.  Don’t get me wrong, that is probably the single best issue of the entire series, it’s a brilliantly done comic by all involved.

Over the ensuing years, there have been comics that have successfully added to the Golden Age legacies.  James Robinson’s brilliant Starman comes to mind first.  Of course, at the time of Earth-Two’s demise, Roy Thomas was still doing his best working in the contemporary legacy characters appearing in Infinity, Inc into the new post-Crisis DC Universe.  Yet, I’ve still wanted to see the return of the Earth-Two concept and Helena Wayne, Huntress, daughter of Batman and Catwoman.  Geoff Johns fed the fire when Power Girl’s original origin was restored in JSA Classified #1-4 (September-December 2005).  PG also had a fun and fond memory of her time on Earth-Two and her friendship with Helena in Superman/ Batman #27 (July 2006).   And, then in the wake of Infinite Crisis, Helena came back in a way.  She was on a parallel Earth that appeared to be the original Earth-Two had continuity continued on after the Crisis in Justice Society of America Annual (Volume 3) #1 (August 2008), and I have been confounded why this Earth was not explored further.  All the toys were put back in the box, why wasn’t anyone playing with them?  With Justice Society of America #1, and The New Golden Age #1, Geoff Johns has found a way to bring back Helena into not only DC Comics but the JSA as well as incorporate all eras of the team in some way. 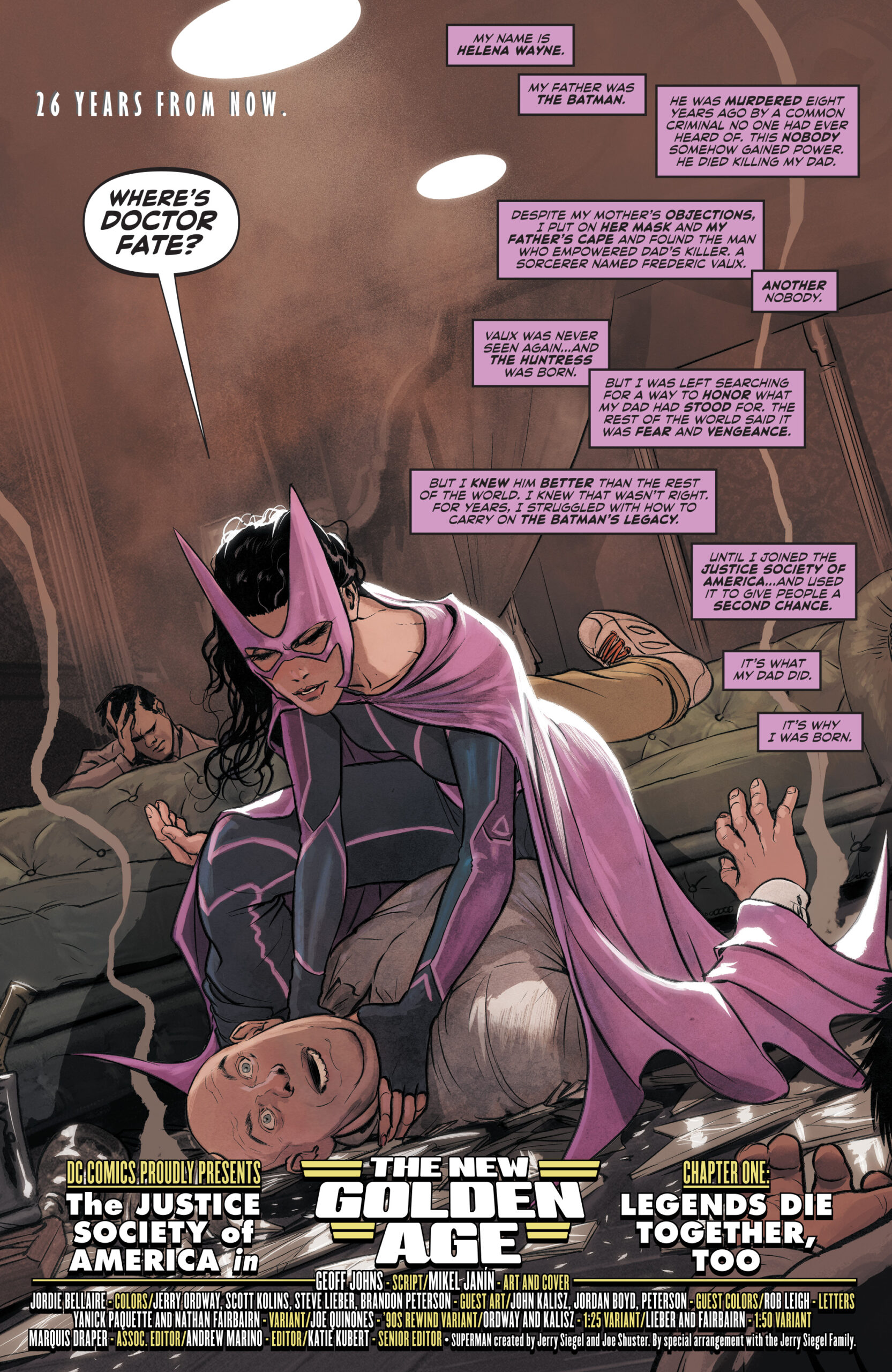 Obviously, this is not the original Earth-Two Huntress.  Nor is it the Huntress from “The New 52” Earth 2 which was an admirable effort with the surprise reveal at the end of the Paul Levitz-penned mini-series.  Nor is it the Helena Wayne from the future that appears in Tom King’s Batman/ Catwoman series.  Although, in King’s story Bruce dies before Selina and this is what we have here.

Originally, Selina dies before Bruce in the original Earth-Two continuity.  And yet, Johns is able to lift the death of the Earth-Two Batman and use it in this first issue as part of Helena’s motivation.  Frederick Vaux is mentioned by Helena in a monologue, which is consistent with his death in Adventure Comics #462 (April 1979).  What’s not clear with all the time travel and jumping time periods is if the account Helena gives of Batman’s death is consistent with the references she makes in The New Golden Age #1.  One would expect them to be the same, but it’s not entirely clear yet.  Bottom line: the Helena Wayne Huntress is back in a real way with as many connections to her original incarnation as Geoff Johns can work in. 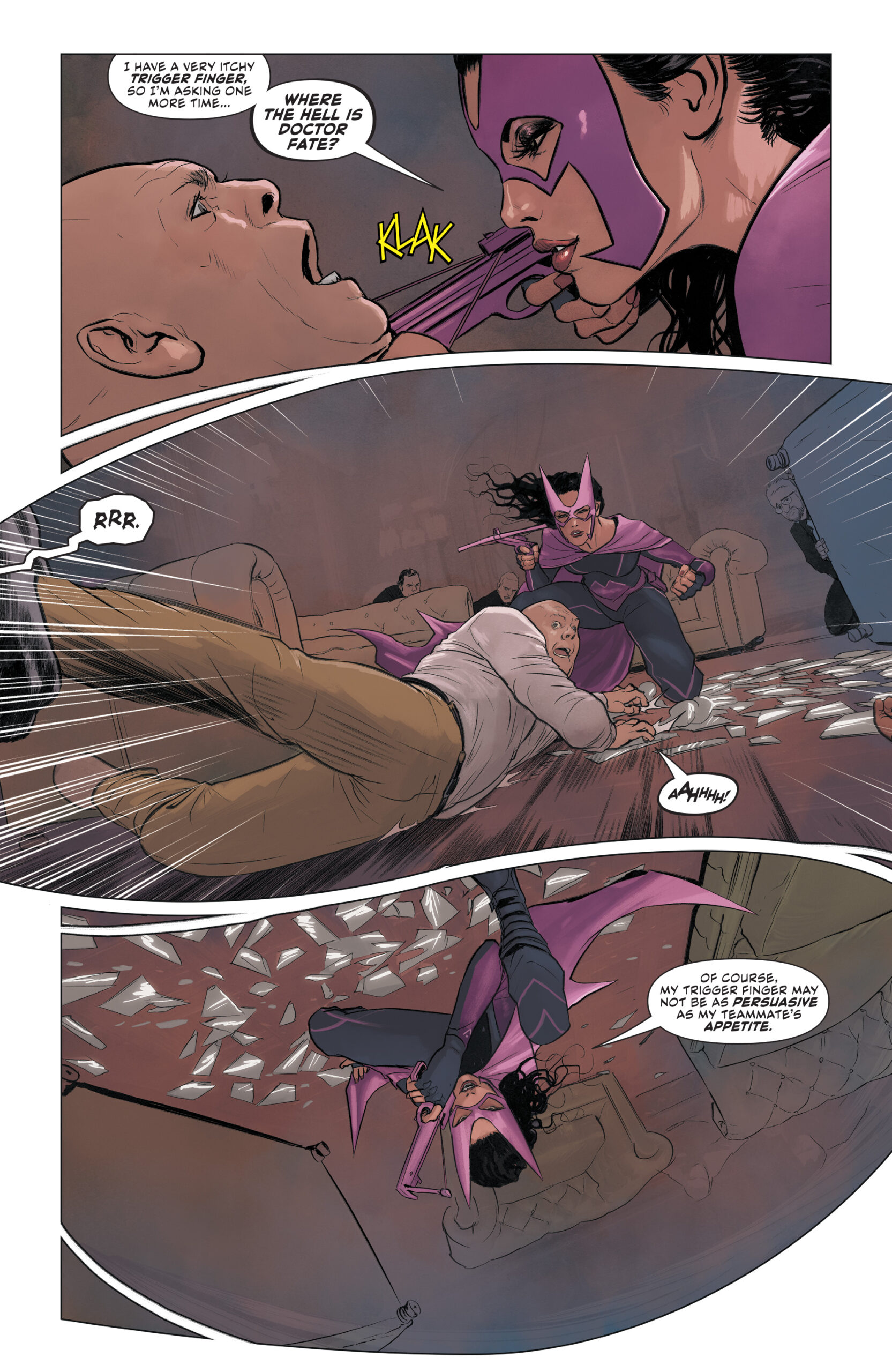 On that note, at the end of Justice Society of America #1, we get some vignettes from different time periods that are drawn by the artists that handled the accompanying flashbacks in The New Golden Age #1.  One of these panels is the funeral for Batman which features a Dick Grayson looking like he appeared in his 70’s appearances in All-Star Comics and in Infinity, Inc. in the ’80s before the Crisis.

Though the image has what appears to be Hal Jordan, Wally West, and Courtney Whitmore (Stargirl) in attendance, it also has Earth-Two anomalies like what appears to be Diana and an aged Steve Trevor with Lyta Trevor (Fury) with them!!!  Plus, Superman’s chest logo is the Earth-Two version!  All these things help create nostalgia for a longtime reader and lover of all things Earth-Two.  It does slightly bring into question what’s going on with time, but the villain is known for that.  What’s really the question is, how does all this continuity exist in the current/future DCU?  I’m excited about it because I think Johns will give us a good story that incorporates it all as logically as possible. 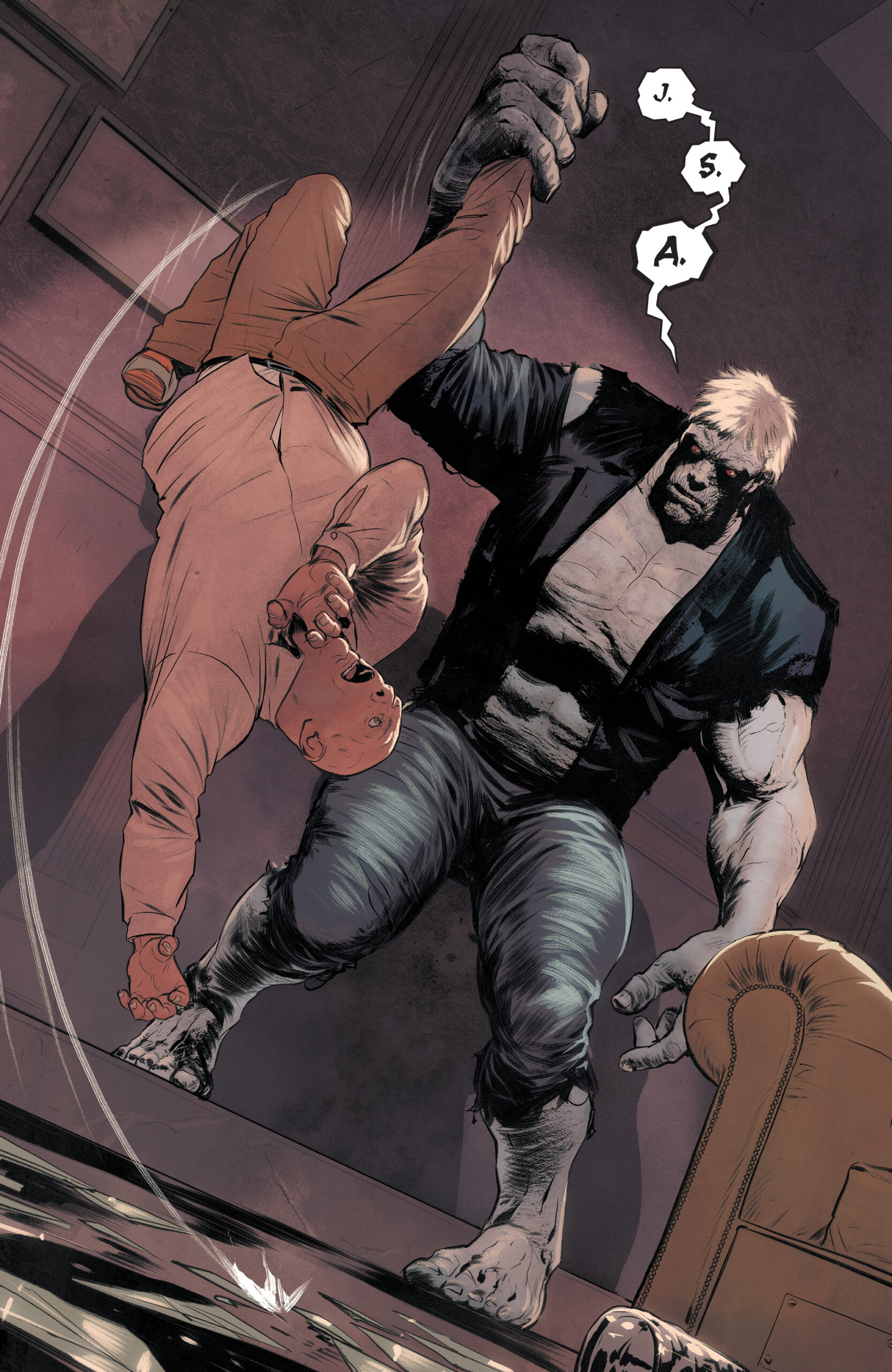 Despite the villain having been revealed, there are a number of characters in this issue who are shrouded in mystery.  We met them in The New Golden Age #1 for the first time, much as Stargirl and Red Arrow’s quarries in the companion book Stargirl: The Lost Children were introduced in the same issue.

The connectivity that’s present in all three of these #1 issues is not only important but enjoyable.  It has ramifications on the greater DC Universe, which is significant because the Justice Society’s getting its importance restored.  It’s just as important that the historical aspect isn’t ignored as it’s critical to the team and the whole legacy concept in the DC Comics Universe.  It’s easy to slap “nostalgia’ all over this, but the sheer quantity of references and attention to the minutiae takes the issue above and beyond. 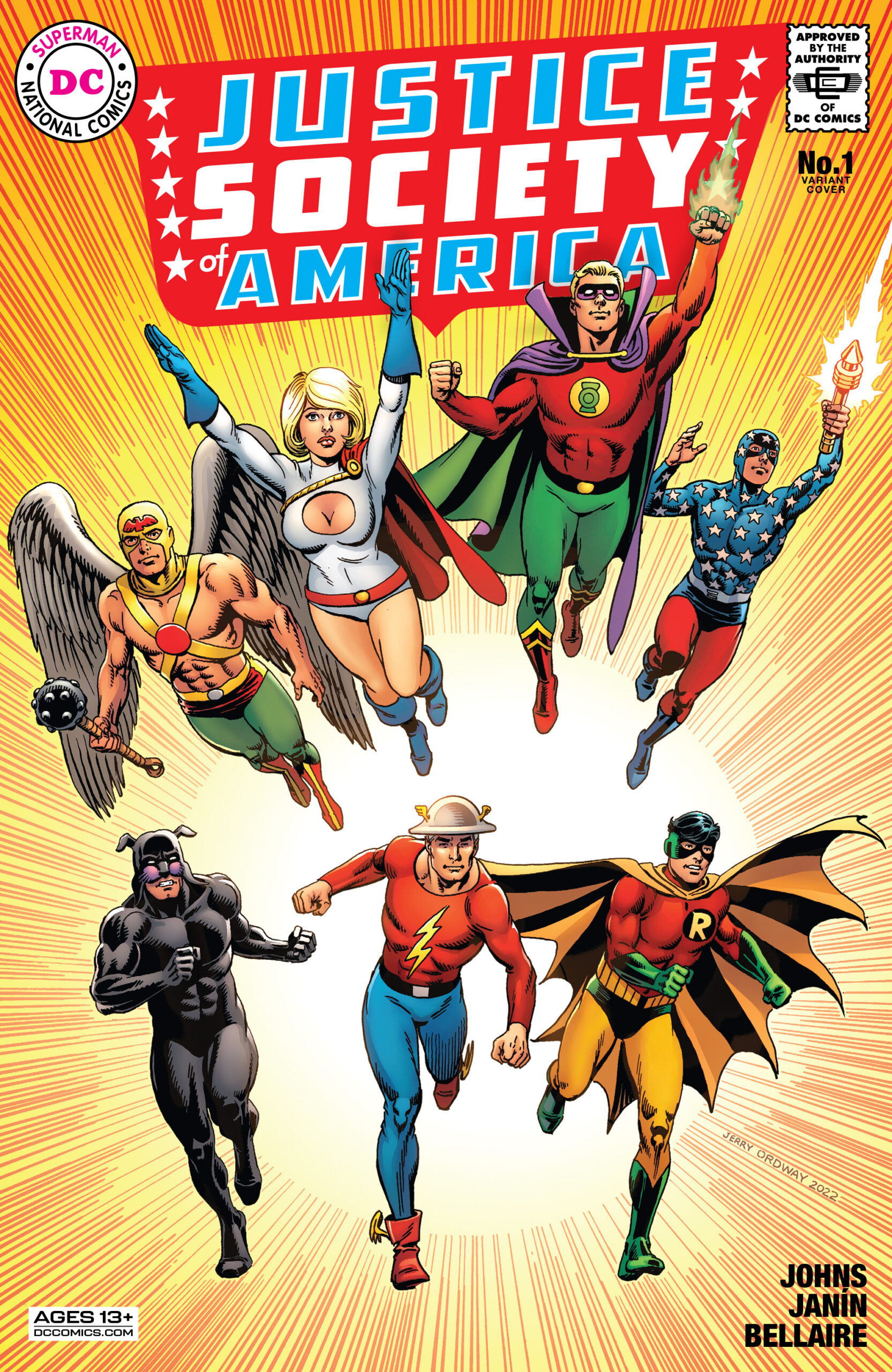 The art by Janin and Bellaire (as well as their guest collaborators as noted above) does a fantastic job of giving Helena’s story its own life.  It’s notable that this story unfolds through Helena’s point of view because it allows Janin and Bellaire to show Helena’s personality and emotion in her expressions and her movements.  How does the daughter of the Bat/Cat move?  Surely, it’s going to be unique.  The silhouette of her leaping from a window on page four references both Bruce and Selina, with a flashback of Selina on page one, placed closely for comparison. It’s an emotional journey for Helena and it’s great to see this in the art.  The tension between her and Selina is executed wonderfully as well.  The long shot of Selina’s head down on the sofa, after Helena walks out on her, communicates the scene wonderfully.  Plus, who doesn’t love an angry Power Girl!?!?!?   It’s done perfectly here as it’s one of the aspects of PG that is different and for which readers have an affinity.

Johns has created a new JSA lineup for the future time in which seems dicey at first, but by the end of the issue, it’s hard not to want to see PG and Huntress wrangle them into shape.  I’d read that as a Gotham “Future State” book.  Helena and PG, together?  Hel(ena) yeah!  Plus, there’s so much potential with the new characters, we have to believe that the JSA will be saved from ALL points in time. 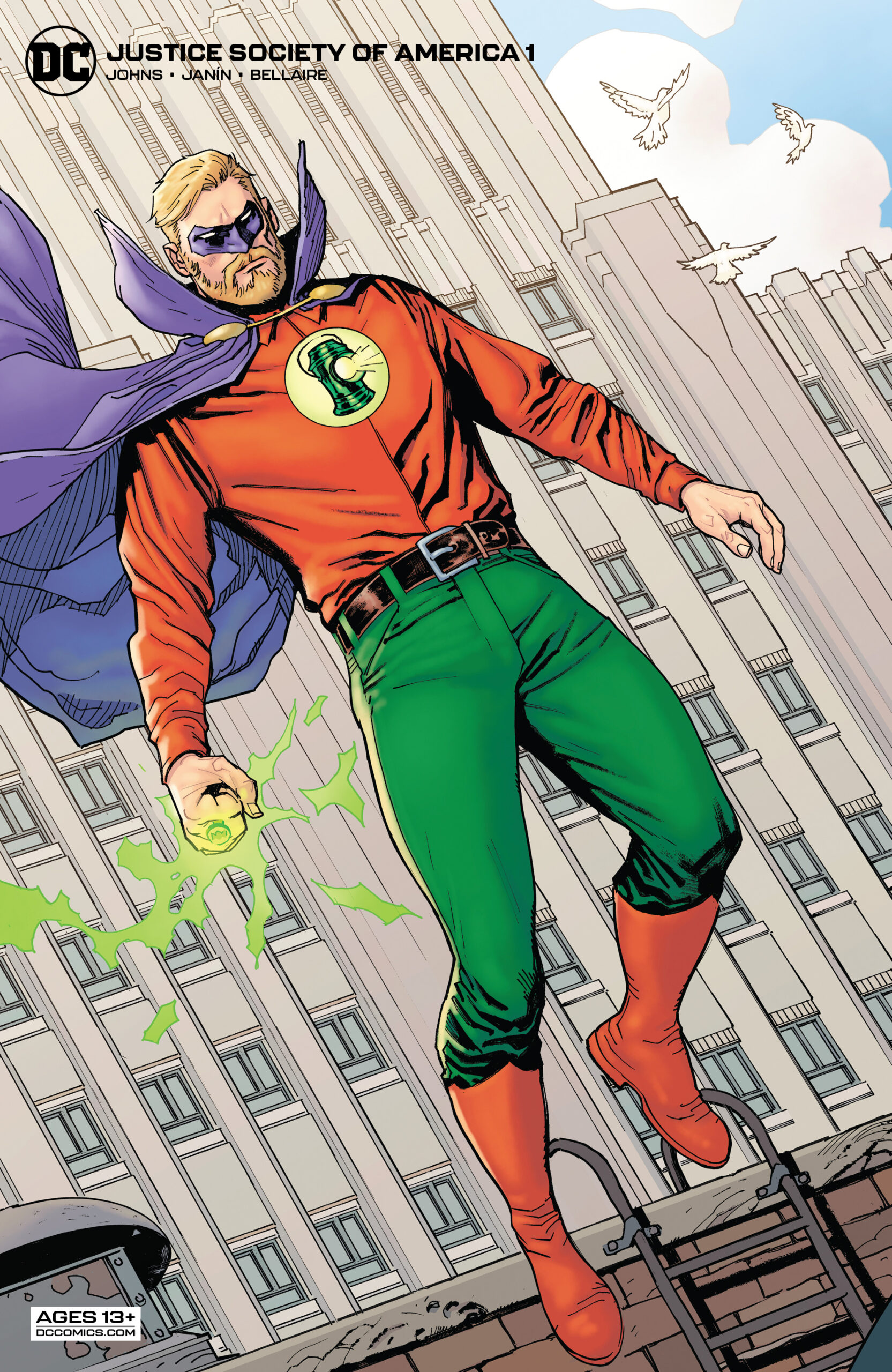 There’s a lot in Justice Society of America #1.  It’s hard to see it objectively with the Easter Eggs intended for longtime readers and lovers of Golden Age/Earth-Two continuity.  As stated above, it would be a negative to kill off  Helena and PG’s makeshift JSA from the future.  Otherwise, there’s just nothing about this comic that isn’t outstanding. 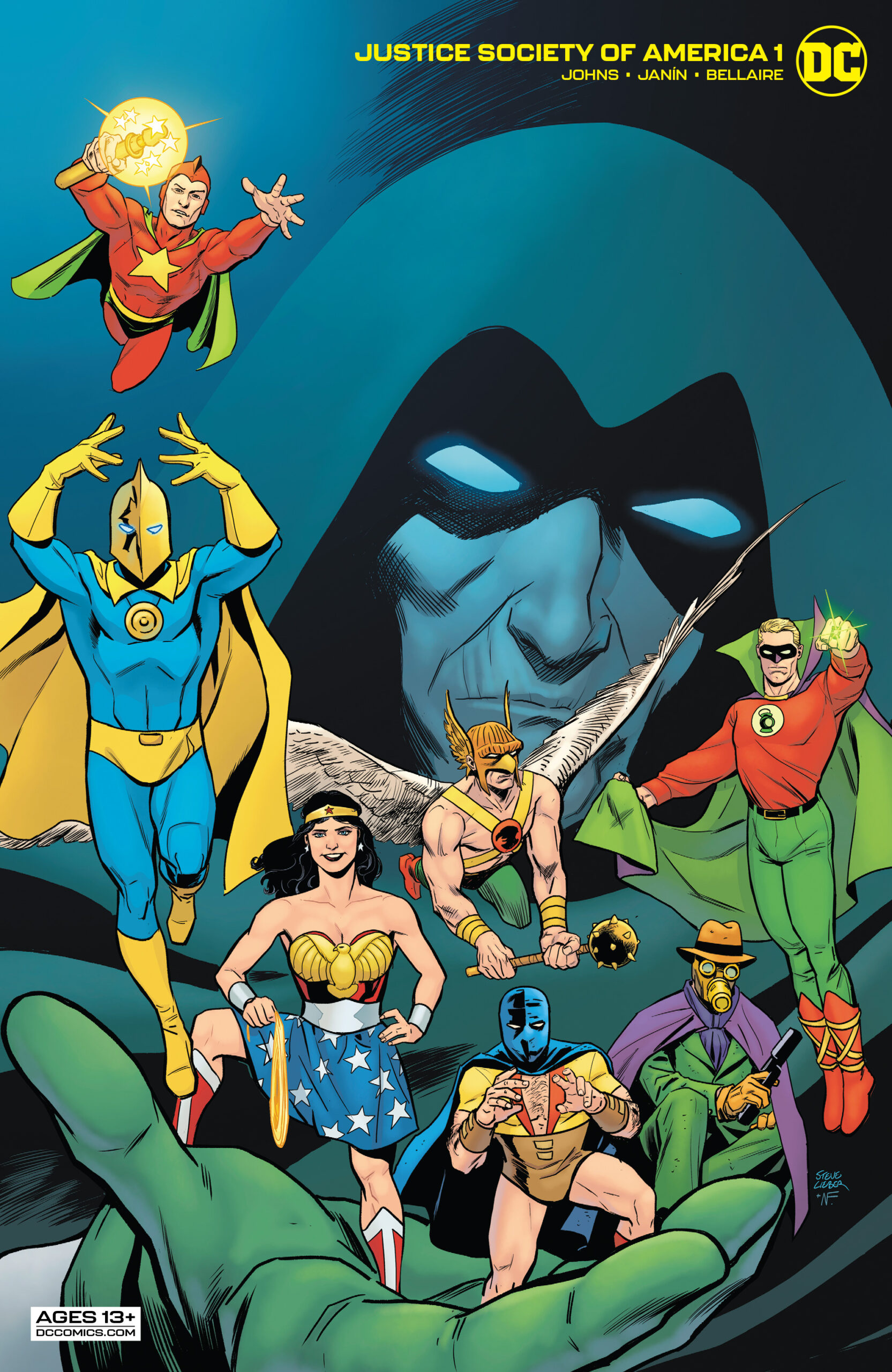 Justice Society of America #1 is important.  Much like All-Star Comics #3 and The Flash #123, this comic establishes something new.  For longtime readers, it may seem like re-establishing something, but that’s because it draws on so much of what has come before.  This series can easily be the beginning of an aspect of the DC Universe that doesn’t rely on Clark and Bruce as the foundations.  Sure, their shadows loom, but Helena, PG, and the rest of the JSA and their legacies are a draw independent of the mainstream DCU.  But, what happens here is foundational to the whole of the DC Universe.    We are in for a real treat based on the quality of this first issue.  Mystery, emotional depth, nostalgia, fun, unique characters- this is great stuff.  Period.