With the “Trinity War” raging throughout the New 52 DC Universe, one of its central figures still remains shrouded in mystery. The purple cloaked Pandora, with her penchant for pistols, is one of the three that make up the “Trinity of Sin” – the other two of course being equally mysterious Phantom Stranger and The Question.

Her origin is slowly being revealed monthly in Ray Fawkes’ series aptly titled Trinity of Sin: Pandora. It has been hinted at for years now that the character has something to do with the creation of the New 52 universe, seen below at the end of Flashpoint.

Fawkes recently sat down with Newsarama, during which he revealed some interesting information about the character. When asked if he could divulge any clues about Pandora’s creation of the New 52 Universe, Mr. Fawkes had this to say:

“The question is there, isn’t it? I suppose, before we consider getting to that, we should ask a few others. Like, for instance: does Pandora know she had a hand in creating the New 52 universe? Is this Pandora the same as the one who triggered the change? Is there anyone else who might know what happened? Would there be personal repercussions to the manipulation of reality on such a wide scale?”

Mr. Fawkes promises many more answers to come as Pandora continues, as well as consolation for fans of the character who wish to see the series continue after “Trinity War” wraps up.

“All I want to say is that I’ve heard a few fans wondering aloud about Pandora’s fate after Trinity War, and expressing doubts that her story would continue beyond the crossover. I want to assure them, and anybody else reading, that not only will her story continue, but it’ll be like nothing else DC is publishing at the moment. I think it’s amazing that DC was willing to launch an ongoing series focusing on a completely new character in this market — and not only a new character, but a wickedly cool, totally powerful and bizarre female lead character who isn’t anybody’s girlfriend or sidekick or apprentice — and I’d like to hope that everybody who says they’re looking for something unusual and unexpected will be picking it up.”

Trinity of Sin: Pandora is currently ongoing, written by Ray Fawkes and artwork by Daniel Sampere and Vicente Cifuentes. 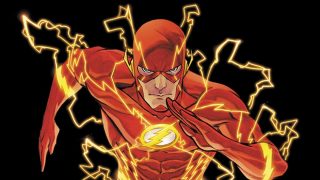