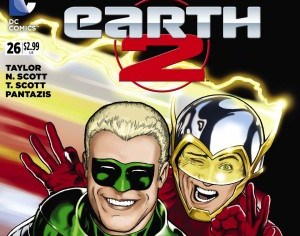 Another exciting installment of EARTH 2 shoots forward towards the finish line of Worlds End. As the story continues, the battle only rages on uniting the heroes with the guidance of Batman who has appeared in the nick of time.  We also have the culmination of the battle between Val Zod and Superman however it turns out to be Earth 2 Bizarro, who was destroyed by Lois Lane Earth 2′s Red Tornado.

“The Kryptonian” story comes to an end along with the arc of Val-Zod. Superman’s long identity crisis is nearly finished, as he embodies the best of what Superman truly is and how he should act despite what world he is from. The empowering crumble of Bizzaro feels as if the once indestructible man has finally now had a moment of weakness as the story’s momentous build-up begins to end. Artist Nicola Scott, also bids farewell to the epic project but her artwork definitely does not falter. She was consistently breathtaking to the editions but not all good things last forever.

Having so many characters to incorporate is a tall task but then adding mythical creatures to the mixing pot, just makes magic. The artwork is vibrant and striking with an edgy future world undertone than has made the characters very much different from their classic forms. It’s this uniqueness that sets a bench mark for DC in creating different worlds based around original concepts, which has been well executed by Tom Taylors scripting of the topsy turvy universe. The dialogue has a frenetic pace and powerful punch during the battles while remaining emotional and pivotal to the characters tasks ahead.

The scripting I think is what makes EARTH 2 something completely distinctive for DC. It’s always hard to pull of an alternative earth but with cleaver dialogue and well placed moments, it balances out the tense situation for those involved. Writing so many characters into scenes together can be tricky, but each one has a pivotal part to play and each one interacts with the next in an evenly flowed pace. Even the broody bat has his moment of glory when he rocks up to the party.

I found that the comic was very red. For some reason, I’m not sure if it was to emphasize the danger that was coming or the battle that was happening, the colorist used overly red panels. It slightly lost a little of the artworks shine for me and blended the story together into one giant red wave. Also the paneling was a little out of sync with the story-line which had my eyes moving awkwardly across the pages and going back to read over what I had already read.

EARTH 2 now moves on towards the Worlds End where war looms on the horizon. In this series, anything can happen and literally does when you turn the world inside out. EARTH 2 #26 is an excellent read and highly recommended if you want a whole new structure to some of DC favorite characters.