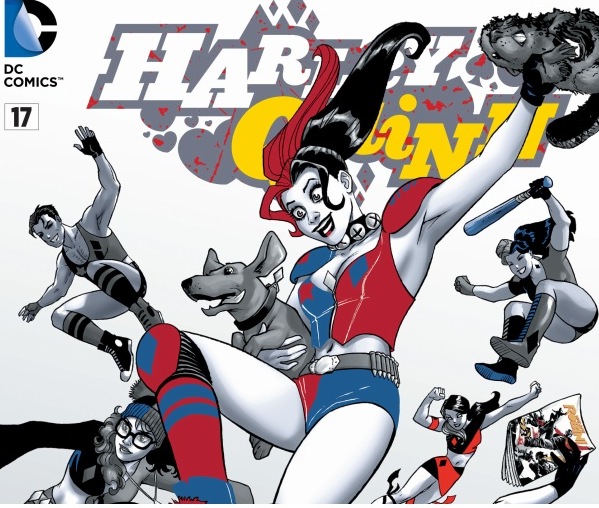 Bash, bang and ka-boom go the team of Harleys in this week’s Harley Quinn. Finally on duty and in action, the team are already down to investigating strange events that seem to plague the small place of Coney Island.

Jimmy Palmiotti and Amanda Conner retrieve their precious comic series as finally Harley finds her story back on track. We get to see the new team in action and start learning some of the nicknames that the villainess has given to her tag team of lookalikes. It is interesting to see a team dynamic like this in the story; I don’t think that DC has really given names to the “goons” that work for villains before. It’s a whole new way of looking at how they are treated and what they do while the boss is busy. Though Harley is making her own trouble for the Mayor as well as looking after some new homeless animals. I’m waiting for her to buy out the nearest shelter and start converting it as her next pet project.

Chad Hardin is back on the job and not a moment too soon with his incredible artwork. Alex Sinclair is also back in the ring as the two extreme artist turn out one detailed page after another. Going from just drawing their normal set of characters, the little world of Harley Quinn has expanded to now include all of the new team. I really applaud these guys on the wonderful work they do to make each character unique but still keeping with the red and black theme.

God Harley always looks so damn good in this series. It’s like she knows she looks good and makes sure everyone else does as well. From artwork to attitude, she smacks the reader with her quirky aura that’s infectiously spreads to her little clones. I loved the fact that “Eggie” is watching the gang. I was wondering who was going to ply mother hen and he got stuck with the job. Also I’m going to say with and try to be delicate, yay that sleaze ball is gone! As much as Harley formed the gang to help with her ”love life”, he was a crappy boyfriend and we all know she needs Ivy back ASAP.

So much text! John J.Hill must die every time he gets handed a script. Trying to cram that much text into small panels must be overwhelming. Not to say that I don’t enjoy the extra story but I feel like my pretty pages are just giant white bubbles. I think a balance is needed and maybe lose some of the fandangle wording here and there.

Harley Quinn is trying to get her life back but now some of her little clones lives are in trouble. With strange things going on in the water side port, will Harley pull her head out of the water in time to help her new friends?