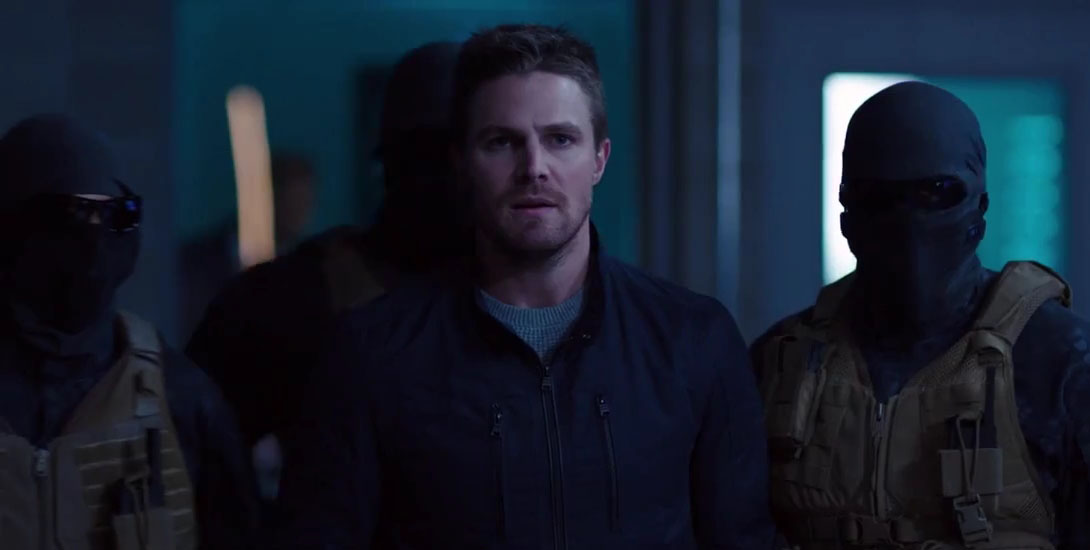 Oliver’s mayoral campaign is on the rise as his approval ratings with the people of Star City.  However, Damien Darhk has not forgotten how Oliver refused to ally himself with HIVE.  Darhk has put plans into motion for retribution against Oliver and to further bring down Star City.

The last few episodes have seen the supporting cast take more of a central role in the story, this episode shifts the focus back on to Oliver.  The episode opens with a HIVE attack on the people who are working to help clean up the bay, this prompts Oliver to push back against Damien Darhk and to publicly out him as the man behind the Ghost’s attacks and the leader of HIVE.  It’s great to see Oliver trying to fight Darhk both as the Green Arrow and as Oliver Queen.  He is using both personas to rally the people of Star City, and it seems for once he is having a bigger impact as Oliver Queen instead of the Arrow.

We finally get a look into what Darhk is planning for Star City, but it’s only a peek and there are still many questions left unanswered.  It seems he is testing a gaseous compound created from algae growing in the bay, and in one of the episodes more disturbing scenes we see him march one of his brainwashed minions into a gas chamber to test it.  It’s all something to do with a project called Genesis and a massive bunker full of corn.  As I said, we still have many questions.

Neal McDonough as Darhk is a fantastic villain.  We see that he is annoyed about being outed by Oliver but quickly turns to use it as an advantage pushing his villainy out into the open.  He doesn’t seem to be holding much back anymore as he uses his powers in full view of everyone.  He is a villain that we both love and hate, vile but so enjoyable to watch.

The episode culminates in an impressive fight sequence to save Team Arrow from Darhk, Oliver finally popping the question to Felicity, and then an attempted execution on Oliver and Felicity.  It’s quite the emotional roller coaster, but it’s what we’ve come to expect from this show.

Diggle’s story with his brother is picked back up here.  It does seem strange that they would just leave Andy locked up during last week’s episode, was there somebody watching him while they were gone?  Their story is an interesting one and it’s good to see Andy a bit more human.  However, it kept taking me out of the drama when they were in the same shot together.  David Ramsey is a fairly large man both in stature and presence, whereas Eugene Byrd as Andy is significantly shorter.  It almost had me thinking of Arnold Schwarzenegger and Danny Devito in Twins.

The flashbacks return us to the island.  Oliver is working with the woman he “killed,” Taiana.  She is helping him recover some information from the downed sub on the island and the flashback story is progressed.  The worst part is the bad CGI swimming double and then we see an equally questionable CGI shark.  Later Oliver is coming out of the water with a bite mark on his leg, we are only told about the attack we do not see anything.  It leaves me wondering if there was a deleted scene or if it’s just poor writing.

This is the mid-season finale and the episode delivers a lot of good stuff, including a big shocker of a cliffhanger with Felicity covered in blood.  It’s a great moment to hold us at until the show returns next month.  Although I can’t see them killing a fan favorite character like Felicity.  It’s great to get more information about Darhk’s plans, and we see that he is not invulnerable.

The show continues to find a good balance between the light and the dark, both tonally and with the characters.  Oliver is becoming more adept at fighting his battles in the different arenas and is careful about crossing the two.