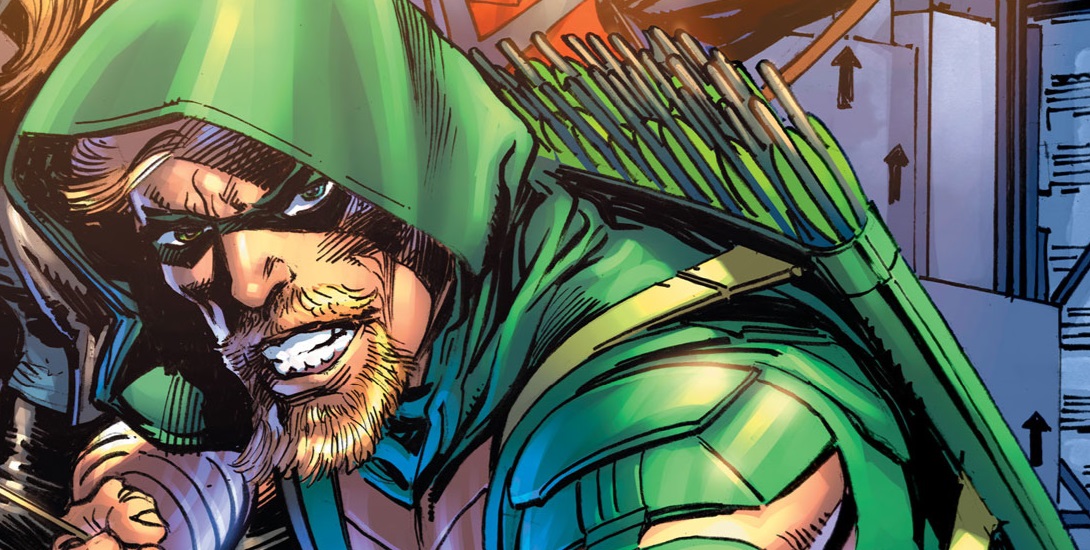 Positives
The cover is pretty cool even if it’s a little silly. Team Arrow kind of looks like a pop band which is amusing. It’s really drawn and I like that the characters look scrapped up like they had just been in a massive brawl.

The interior art and color by Otto Schmidt is great as well. There’s a lot of neat looking backgrounds that I like which goes with Schmidt’s wonderful coloring. The action looks great as well with some cool looking moves from Oliver.

I like Oliver trying to use the media to expose Queen Industries. Benjamin Percy is doing a really good job of making the book timely with parallels to the current political situation without making it too obvious and dating it. The media can be a powerful tool in situations like this so I like this development and I like the reporter.

Negatives
Percy attempts to establish a relationship between Ollie and Malcolm but it doesn’t quite work. I like the idea of Ollie being like a son to Malcolm but it’s introduced through Oliver’s narration which is a little awkward. We never get to see what Oliver is talking about with this and it comes out of nowhere. Oliver has not expressed any sort of emotional tie to Malcolm until this issue so it feels weird.

Verdict
This is a pretty good issue. I enjoyed the political nature of the issue with the ties to the real world. Art can be a way of coping with and understanding the real world. Schmidt’s artwork is really great with some pretty scenery and kick-ass action.