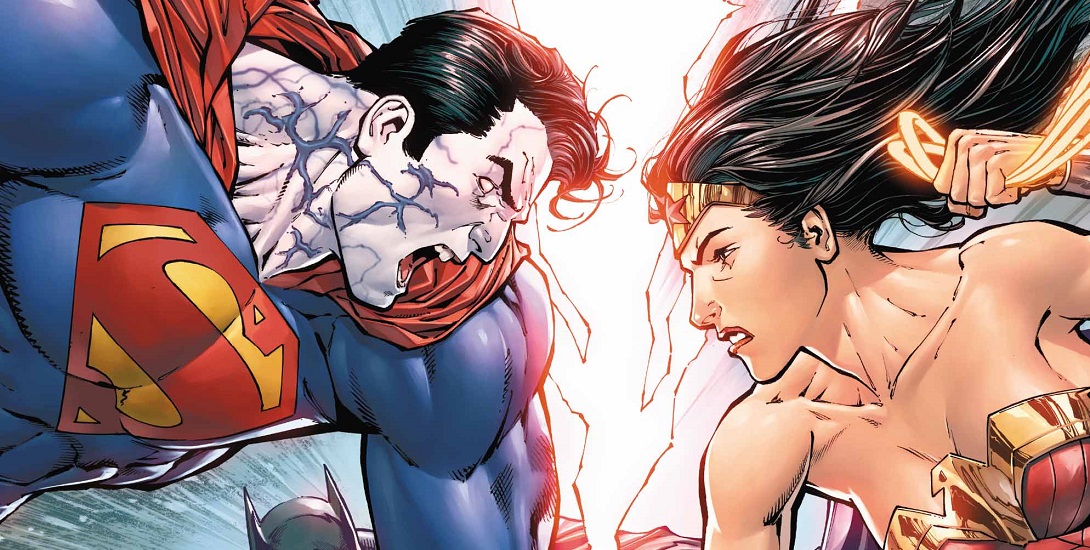 With the possessed Outsiders and now Superman under demonic possession, Wonder Woman and Batman have their hands full. Thankfully, they aren’t called the world’s finest for nothing. Together they drag down Red Hood and Batman brings him back to the cave for testing to save Gotham and the other in the only way he can.

Meanwhile, we learn Circe’s past and why she wants to open the Pandora Pits. Of deals with a devil, immortality, and betrayal. Constantine manages to figure her out while he bleeds all over the floor of a cave in the Arctic thanks to Ra’s Al Ghul.

What does he know about her that her deceptive ally does not? Will Constantine be able to save himself before he bleeds or freezes to death?

The art in this issue is great, V Ken Marion has an iconic and idealist style of drawing. Certain features of the characters are similar to Jim Lee, such as Batman’s ears and the women’s noses. All of the characters are drawn with skin tight suits and every possible muscle, perhaps even some that aren’t anatomically correct, showing through.

The most subtle artistic touch is Circe herself. He visual changes throughout the progression of her timeline in the issue perfectly her decent into power and evil. We see her in her youth as a tan woman, with orange eyes. When she confronts the Pandora pits originally her reflection comes back much paler with pink hair. Finally, now, we see her with an almost purple complexion and blood-red hair. IT is a simple but wonderful touch.

The writing and art in this issue are executed well and it is entertaining to read but the issue feels slim. Especially as the dark trinity start turning on each other. Trinity #14 touches on many interesting events, Circe’s origin, the possessed heroes, Constantine’s fate, and then Ra’s Al Ghul, but the spread in focus makes the issue feel thin.

Trinity #14 is a beautiful issue with solid writing and great event. While it sets up the climactic finale of the arc, this issue feels thin.