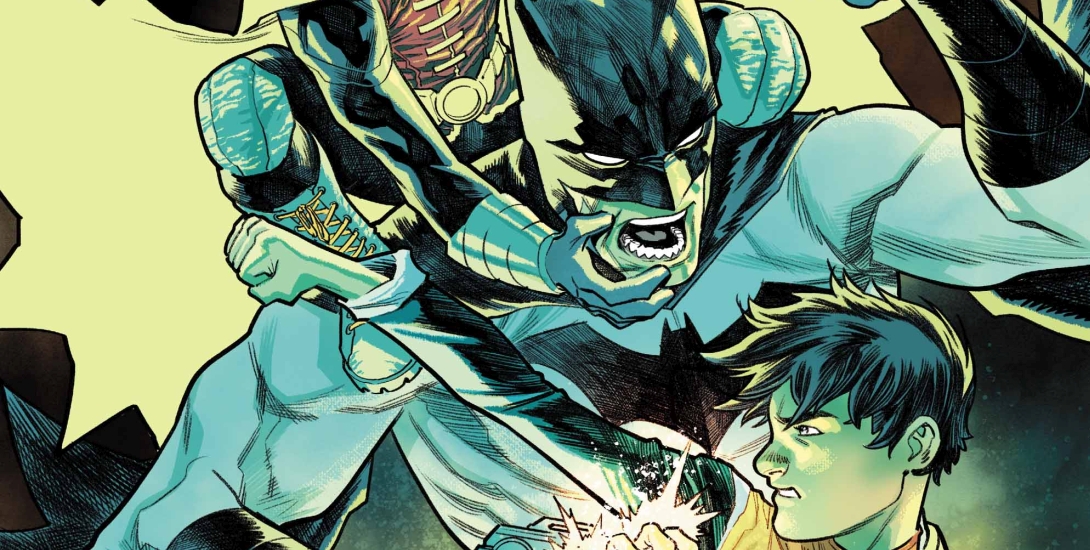 “SUPER SONS OF TOMORROW” part two! The Super Sons are on the run after discovering Superboy’s dark destiny. Will Robin be able to protect his friend from the Batman of Tomorrow?

This issue marks Superboy Conner Kent’s return to the DC Universe. Well, technically it’s an alternate future Conner, and he’s going by the name Superman. In fact, the villains of the crossover are the Young Justice/Teen Titans team from a future where they have taken over their mentors’ roles as the future Justice League, as seen in the pre-Flashpoint Teen Titans title, so he brings Bart Allen (Impulse) with him.

We also see ersatz-Batman Tim referring to Hypertime, a concept that DC invented to bring the idea of alternate Earths back after Crisis on Infinite Earths had done away with the multiverse. With the current multiverse limited to 52 Earths, Hypertime is necessary to allow DC writers to use an alternate Earth without worrying if DC has used up all 52 parallel worlds yet.

It’s interesting to see how Superboy’s strange relationship with the Teen Titans. Although he has a partnership with Damian (in Super Sons) and has worked with the Teen Titans, Damian is for keeping Jon at arm’s length from the team – ostensibly due to Jon being 10 years old and therefore not a teen. Is this crossover leading to the Teen Titans making an exception and welcoming him into their ranks? Or will it give the Titans reason to bar Jon altogether?

Kathy Cobb, Jon’s neighbour and best friend from the Kents’ time in Hamilton County makes a brief appearance. It’s good to see that she hasn’t been forgotten. Hopefully, her and Jon’s friendship will continue to figure in Jon’s life.

I mentioned in my review of this week’s Superman, which is the first chapter in “Super Sons of Tomorrow,” that it’s hard to imagine what kind of horrific future could change Tim Drake into a person who would set out to murder a child. Tim is essentially a good person and extremely intelligent, so wouldn’t it make more sense that he would attempt some other way of averting a future in which Jon causes the death of millions?

Also, we see Tim being extremely dismissive of Lois while seeking to kill her son. Wouldn’t it be more in character for Tim to be more reluctant and regretful if he was put in the situation of having to kill an innocent? This Tim seems too cold-blooded for us to believe that he is really a future version of the canon Tim.

Despite this, this chapter keeps up the momentum started in the first chapter. This crossover so far is one of my favourite comic storylines of the year. Hopefully, the remaining chapters will  maintain the same level of quality.