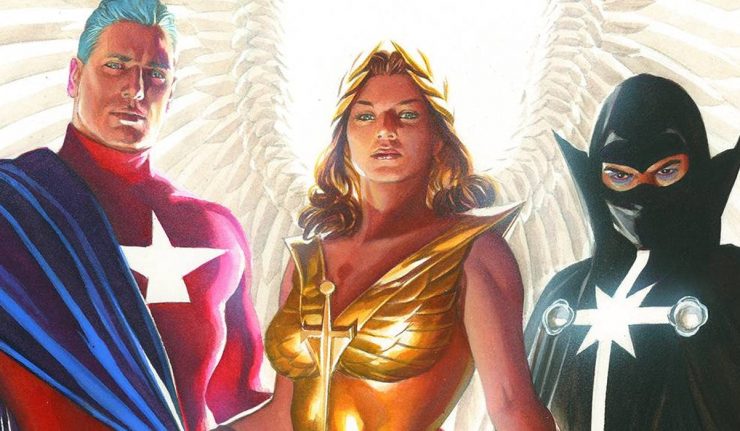 As the ongoing, monthly series comes to a close, Kurt Busiek sat down for an interview where he discusses the future of Astro City in graphic novel formats. He also discusses the development of an upcoming Astro City TV pilot.

Heralded as one of the finest superhero titles to ever be published, Kurt Busiek’s Astro City is the story of a group of superhero who battle all manner of evil in the fictional city of the same name. What sets Astro City apart from other superhero titles is the continuous emphasis on the internal mental and emotional battles within the characters rather than larger than life challenges (although there are plenty of those as well).

With that said, the current run of the title, being published under the Vertigo label of DC Comics, will come to end shortly but that does not mean the title will end indefinitely. The series will switch from monthly titles to an OGN (ongoing graphic novel) format. In an interview with Newsarama, Busiek had this to say:

“For my part, it’s been very difficult handling the monthly schedule, not so much because of the sheer monthly monthliness of it (although I fell off a cliff healthwise these last few issues, which is why they’re coming out slowly), but because I’m always juggling two tracks at once – the issues for Brent and the issues for our guest artists, and as a result I could never manage to get far enough ahead to be able to do a long story with Brent, because of the demands of the monthly grind.”

“…we can do longer stories without the need to get them published 24 pages a month, which is good, because we’ve got a number of them built up we’ve been wanting to get to. And as long as we’re getting enough pages done per month, we don’t have to hit that 24-page finish line every four weeks or so; we can do it at the speed it needs, and if we get a 200-page book done one year and a 180-page book done the next, that’s fine; it’s not like we have to get have to get 288 pages done every year, which we did under the monthly system. So we’ll be able to tell the stories we want to tell at a reasonable speed and in the format most readers prefer, which all sounds good to me.”

According to sales numbers, most readers of Astro City read the book once it’s collected in the graphic novel format rather than collecting monthly issues. This isn’t unusual for most comic book titles but it is much more pronounced with Astro City so it’s fair to assume the title will benefit from this change.

Astro City On The Small Screen

Earlier this year, it was announced that Astro City would finally develop a TV pilot after years of being in development limbo. The pilot will be developed by Fremantlemedia, the same development team in charge of American Gods.

One of the challenges in getting the pilot developed was determining how involved Busiek would be with the series and if he would write some of the episodes himself. Some offers had him taking a step back from developing the series while others wanted him to be directly involved.

As of now, Busiek will co-write the pilot alongside Rick Alexander with Greg Noveck serving as series executive producer. As to the arrangement, Busiek had this to say:

“Having me co-writing the pilot was a selling point for Fremantle, and they – along with Rick Alexander and Gregory Noveck – have been…I was going to say “welcoming,” but it’s more than that. Every time I’ve come down to Los Angeles, it’s been a terrific experience, and it’s been fun to be in the room to help work things out. I have the advantage of being able to say, “Well, we did this in the comics for this reason, but the main point we’re trying to get at here is this other thing, so if we play it a different way for TV, we’re still serving the spirit and intent of the series.”

As of now, the series finale for the monthly book will be available May 16th with the first of the new graphic novels to be released sometime next year. As for the tv show, no dates have been released as of this writing.