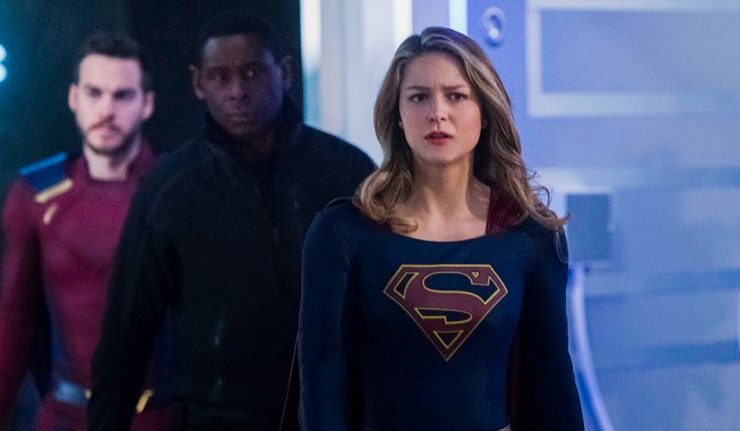 I like the return of the cult. I don’t know why, but cults are always an interesting story element. There is something inherently creepy about cults, so I always love it when one shows up.

Everything with James is great. They writers have utilized him so well in this latter of the season and I’m loving it. He genuinely considers revealing his identity to the public and I hope that actually happens by the end of the season. The big question James has is how people might react to Guardian being black. The mask allows him to be judged by actions and not by the color of his skin which is a very interesting motivation for him to wear a costume. I wish that had come up sooner. And I do really want to see how National City reacts if it is revealed. James also tells a story about the first time cops put handcuffs on him; he was seven and playing hide and seek. Mehcad Brooks gives a wonderful monologue that is really powerful and well delivered. Recently, Brooks has had the stand out scene of every episode and it’s nice to see him so prominent.

Ruby and M’yrnn forming a bond was a fun element. It ended up being really sweet. And I like that it ties M’yrnn more into the fabric of the show. He has felt kind of separate from everything so this brings him more into the bigger picture.

The Lena subplot continues to frustrate me. What I find so aggravating is that I can see the potential; I like the idea. My problem is how it’s framed. The show is completely siding with Lena; she is 100% right and has done nothing wrong. It’s ridiculous that the show, and Lena herself, are so judgmental towards Supergirl. What would be more engaging is if the show treated more like a reasonable argument. Lena has valid reasons to develop defenses against Kryptonians. Evil Kryptonians have and continue to show up on Earth wreaking havoc. Supergirl and Superman are both vulnerable to mind control, magic and red kryptonite. But Lena’s kryptonite, and other tech, is a danger. Lena is also vulnerable to magic and mind control. The kryptonite could easily be stolen, proved by Guardian a couple of episodes ago. And it’s especially dangerous if Kara and Clark don’t know about it. Batman keeps kryptonite but Superman usually knows all about it and encourages it just in case. It’s a matter of mutual trust and respect. That’s why Superman gives him the kryptonite ring. Lena has been so duplicitous in the last few episodes only to turn around and blame everything on Supergirl and I’m supposed to side with Lena. If it was framed as more of a legitimate argument in which both sides have valid points and that was recognized, this could really work. But, so far, this subplot is just an egotistical jerk being an asshole to the main character and the show blindly agrees with the asshole for no reason.

The secret identity stuff is kind of nonsense. I have never understood this conflict. As a kid, I was always confused why Peter couldn’t tell MJ that he’s Spider-Man. The reason given is that if she knew, that she would be a target. And the same excuse is given in this show. A couple of things contradict this. First, Lena is already a constant target. Knowing Supergirl’s identity isn’t going to change that. Additionally, everyone else in Kara’s life knows. Her parents, her sister, Lois and Clark, James, Winn, Cat Grant, Maggie and Martian Manhunter and his dad. As well as literally every single person at the DEO. I don’t think a single one of those individuals has been tortured for her identity and none of them are necessarily in more danger than they were before. And Lena hasn’t been tortured for Guardian’s identity yet. Second, if Lena knows, she is actually more protected. She would have Supergirl on speed dial. If she knew, she would be aware that she could rely on Kara and would probably be safer.

This is a strong episode mostly carried by James. It is a Guardian-focused episode and it really shines in those moments. Brooks is wonderful especially in his big monologue to Lena. The cult is cool; I like their plan and their presence. But the Lena subplot is awful and tedious. And that conflict is Kara’s main story element right now so the main character feels a little lost. She has the most screen time; she still is the main character and it definitely feels that way. But every scene is so dull and aggravating because of how the supporting cast is treating her.