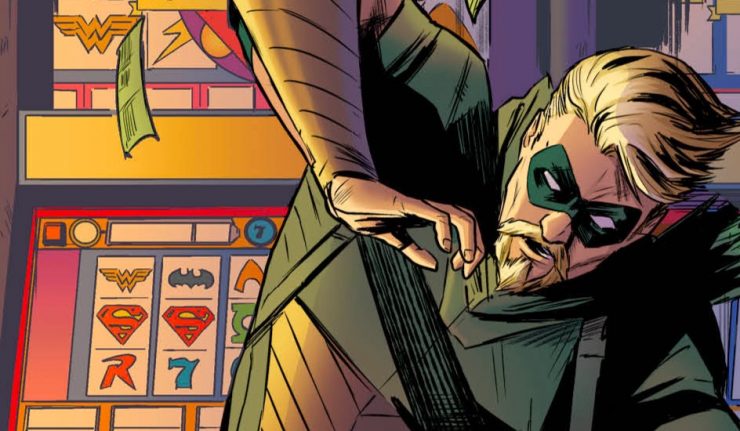 Entitled rich boy Oliver Queen grew up a member of elite society. But after a drunken escapade left him stranded on a deserted island, Oliver learned to survive and become more than a man—he became a hunter. He became a survivor. He became a hero. But when Green Arrow comes face-to-face with a challenge he never saw coming, his entire worldview—his reason for being a hero—comes into question. Because that challenge has a name: Amanda Waller!

The cover by David Lopez is cool. I like Amanda Waller ominously looming in the background. The image commands attention with the JLA passed out and Ollie on his own. It is also very well drawn.

The interior art is by Carmen Carnero with colors by Trish Mulvihill. I like this art a lot. Mulvihill’s colors are really vibrant and fun. Carnero’s characters models are quite good as well; I like her Dinah despite not getting to see her much.

Green Arrow teaming up with Batgirl is a fun idea. I don’t think I’ve ever seen that before where it’s just the two of them. It’s probably happened before but I was really excited by that because they’re two of favorite characters. It’s cool to see them together.

This is a tie-in issue to another story, “No Justice”, which I normally really don’t like. But to give this issue some credit, it is an annual and it establishes elements for an upcoming story. I like that there is a point to this tie-in because, more often than not, there isn’t. Additionally, it doesn’t feel like the book is being interrupted.

While it’s better than most, it still is a tie-in. Ultimately, this is support for a story that I haven’t even read. It feels incomplete and random because it exists to fill some gaps in a different story.

This issue is solid. It’s worth checking out for the art and it’s a decent introduction for the new creative team. Despite being a tie-in, the issue managed to be enjoyable and fun. However, it feels like an incomplete story because it is. To get the full picture, one must read “No Justice.” And I don’t think someone should have to buy a Justice League book to fully understand what’s happening in an issue of Green Arrow especially with the price of comics these days.