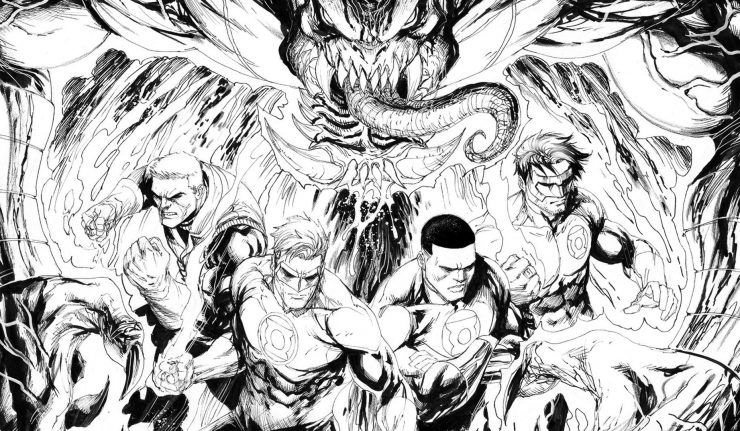 As the saying goes, “all good things must come to an end,” and that even goes for the DC Universe.  As August approaches so does Hal Jordan and the Green Lantern Corps #50 which will mark the end of the series.  As the series ends so does the five year run of the Lanterns being written by Rob Venditti.  After writing Hal Jordan for DC during the “New 52”, DC retained Venditti to rewrite the Lanterns starting with issue #1 for the “DC Rebirth” initiative.

“So it just seemed like a nice way to have that connectivity across the universe without changing our story in any way, because it was always a very Hal-centric story due to his relationship with Tomar-Tu that we built up, and moments that we’ve seeded throughout the series with pondering, in a very natural way, if the Green Lantern way of enforcing the law is working because so many criminals end up getting loose and doing the same things, if not worse things, again and again…I think it goes to the heart of who our characters are as heroes and what it means to be someone who has the authority to enforce the law.  And the Darkstars, as much of a threat as they are physically, in terms of their power set and how formidable they are as combatants, they’re also a philosophical threat in that, like the Darkstars themselves, who are all made up of former police officers, in some ways, the citizens of the universe themselves have begun to question if the Green Lanterns way really works”

When it came to the characters he wrote for half a decade, Venditti was very candid and heartfelt in his answers:

“Yeah, that was exactly the idea.  It is Hal Jordan and the Green Lantern Corps and it does feature the four classic Earth Lanterns-Hal, John, Guy and Kyle.  And the idea of the entire series, for me, is how these characters are also very different.  And while they wield a similar power set in the Green Lantern ring, what makes them who they are is all very unique and separate from each other…So I really wanted to focus on who they were as individuals in this storyline, going on their separate missions that would take them to some surprising places to confront some surprising things before bringing them all together for the big finish…And I feel really fortunate to have been on the series this long.  when DC first asked me about doing Hal Jordan and the Green Lantern Corps, the hope is always that you make it to issue #12, and then after that, you make it to #25, then after that, you really want to make it to #50.  That’s a really long run in the modern era of comics, and I feel very fortunate to have been able to do that, to see the series all the way through to the end the way I wanted to see it to the end.  I’ll miss writing these characters, but on to Hawkman, continuing with that, and continuing with Damage, and then there are a couple of other things I have in the works at DC that haven’t been announced yet, but hopefully you’ll be hearing about them soon.”

There is no doubt that Rob Venditti has not only made a major mark in the comics world with his writing, but he brought all of the characters involved in the Green Lantern universe to life and gave a new dimension to such amazing and timeless characters.

Thank you, Mr. Venditti, from all of us at DCN.