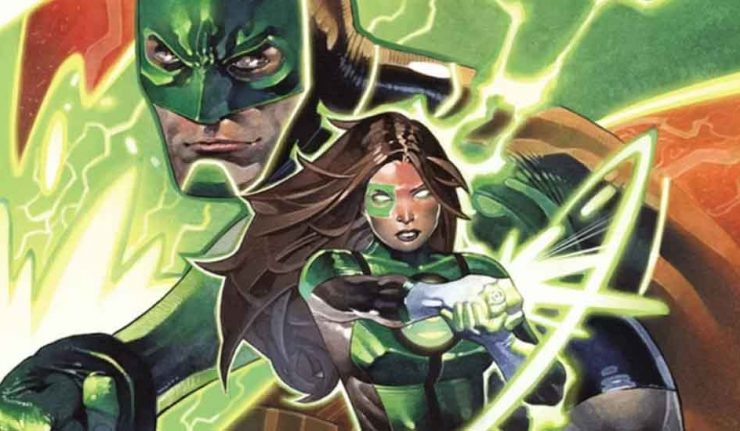 Writer Dan Jurgens and artist Mike Perkins will be taking over as the creative team on Green Lanterns, beginning with issue #50.

In a recent interview Jurgens explained what drew him to the title.

I think it’s fair to say that I’m interested in both Simon and Jessica as well as the Corps in general and the way that they interact within the Corps.

What really drew me to them is that even though we have seen them grow individually, especially Jessica, they’re still new at this.

And I always find the concept of someone being new, as a superhero in general or as a Green Lantern specifically, to be very interesting.

I just don’t think it’s that easy to go from being someone who was basically locking herself in her apartment to then putting on a ring and flying through deep space. That is such a leap, but I find it a fascinating topic.

Jurgens also had a chance to talk a little about the upcoming storyline, which involves a murder mystery but ultimately focuses on trust and faith.

Yeah, that’s a strong part of the story we’re going to play with. It plays with this concept of faith and the faith that these teammates have in each other.

When does that sense of trust get pushed too far? When do you no longer believe in that person who is standing right next to you?

Really, it becomes, I think, at that point, a very human story. And I think the wonderful thing about Green Lanterns is that you can tell a very human story with them as people amidst the circumstances of this wide-open, space-bearing adventure that we’ll be playing around with as well.

Jurgens continued to say how he is also bringing Hank Henshaw, a character he created, back into the mix.

Hank Henshaw has interacted with the Green Lanterns before, some years ago, so what we have is this opportunity to revisit something that worked out very well as an adventure for the Corps once before, and at the same time put a new spin on it in terms of how we see Henshaw and his interaction with the Green Lantern Corps.