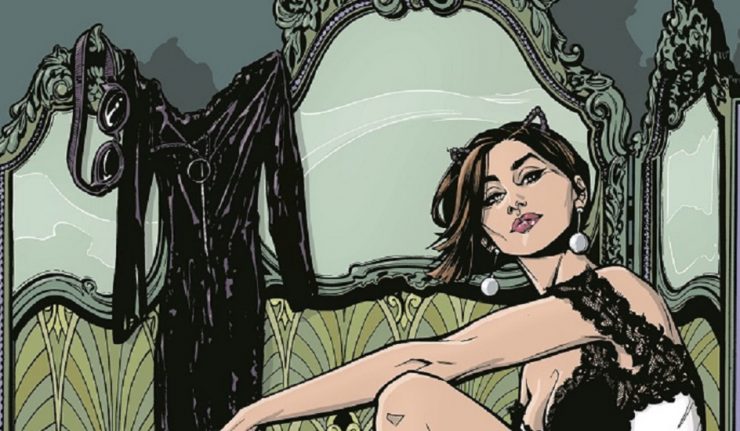 [Editor’s Note: This review contain spoilers for this issue as well as Batman #50]

It has been a week since Selina Kyle left Gotham City following her decision not to wed Bruce Wayne, and she’s back on the streets, this time to expose a copycat who’s pulling heists around Gotham City. As Selina cracks the whip on her former criminal cohorts, she’s attracting unwanted attention from one of Gotham’s most dangerous groups. The mob? Nope. Try the GCPD. And as if the Bat-Bride didn’t have enough problems, don’t miss the debut of an all-new villain determined to make trouble for all nine of Selina’s lives. Don’t miss the start of an all-new monthly series written and illustrated by Eisner Award-nominee Joëlle Jones!

Jones’ series starts out the way it should, which is from a realistic standpoint. Picking up from the shock ending (or rather, one of them) from Batman #50, its protagonist is experiencing deep remorse at sacrificing the love of her life for the greater good and gains distance in a yet-to-be-named town. Selina Kyle is vulnerable, and it is not a state that one who always owns the room is used to. The moment in the apartment with her old suit is multilayered. It shows how much her decision has broken her heart because her mind is racing. Alfred’s words, although sincere, can be read in the negative given she has broken his surrogate son’s heart. It’s a burnt bridge that Selina will have to go far to mend.

As to her tossing aside her former outfit, it’s also a symbolic way of establishing a fresh start. Then there is the series of crimes committed by these imposters. This latest fraud has crossed a line the real Catwoman never would, and at first glance, you swear that it’s Selina. As to the lead detective, could Jones be setting him up to be a potential future love interest or rebound? Her support base – Carlos and Linda – are already established as well, so it’s not beyond the realm of possibility.

The shock value of Catwoman with a gun is matched by the established antagonist, Raina Creel. The duality of her character is prominent and the questions as to the circumstances leading to her disfigurement hook the reader in. Further, why is she using Catwoman’s image for her purposes? The artwork is superb in that it’s photo-realistic and echoes that of Batman artist Mikel Janin, which greatly aids the transition from that period in Catwoman’s life. Selina’s poker face is, well, “purrfect,” and the eyes are so telling. You could honestly get lost in them.

The only complaint I have about this book is the new Catwoman costume. I’ve been a fan of the Darwyn Cooke model that more or less survived Flashpoint. Its subtlety and practicality worked in that it was a balance between the animal totem and her job as a thief. This new number, however, seems to tap into the Michelle Pfieffer version of the suit, both in the cowl design and shading. Also, I’m not sure about the open slits under the arms. Catwoman doesn’t need that; the black silhouette is sensual enough and the one-piece allowed for some protection. This just feels like unnecessary flash (no speedster included).

Also, the loss of the goggles means the loss of the night vision function, which I always found cool. Maybe the suit will grow on me, maybe it won’t. I just think at this point these modifications are a step back as opposed to forward. Whether it’s a visual statement as to what Selina is trying to get back or not, time will tell.

The artwork is solid and the story draws you in. Again, the new suit is a hard sell for me, personally. Besides that, a great start to the next chapter in Catwoman’s life.