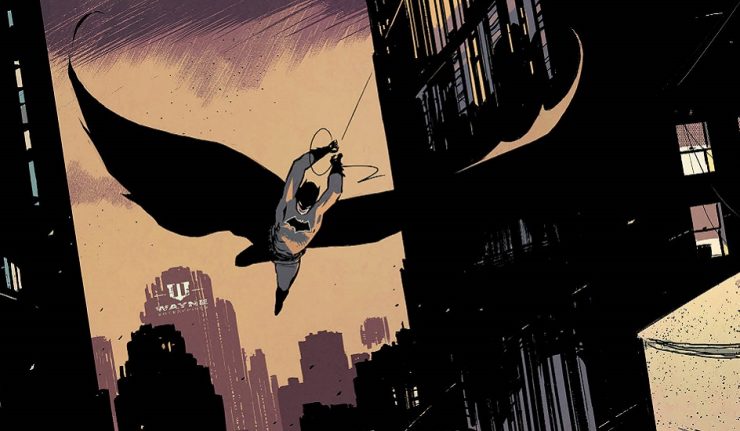 The trial of Mr. Freeze continues with the jury still deadlocked on a verdict thanks to Bruce Wayne! As Bruce makes the case of innocence to an already decided jury, can he actually be sure about Mr. Freeze’s innocence? And if Freeze isn’t the murderer–then who could it be?

This story is well told from Bruce’s point of view throughout and King really makes you appreciate it here. Continuing from our previous issue, we still find Bruce trying to convince jury there is a shred of doubt in Freeze’s guilt. Bruce lays out the thinking behind this concept very well, mainly by citing that although Batman is good at what he does, and while it is true that Batman has saved lives and Gotham repeatedly–he’s only a man. Bruce uses this logic to make the jury realize that with everything Batman has done and will ever do, he’s still flawed and can make mistakes. By that notion if Batman can make mistakes, then it throws Freeze’s guilt into overall doubt. King really shows how well Bruce hides the Batman persona so well. Bruce talks about Batman in the beginning as a force of nature, a godlike being before finally humanizing him and shows his frailties to the jury– with the jury not knowing in reality he’s talking about himself.

The only complaint I have about the issue is Bruce’s overall dialogue throughout the book. Although King does a great job of conveying Bruce’s struggle with Batman there are times where Bruce’s dialogue overpowers the book and you forget he’s talking to other people. It has moments where it almost seems as if he’s confessing his guilt of being Batman to the jury. We have a few moments where jurors interrupt Bruce, but I feel like there should have been more.

Overall Batman #53 is a decent read, but we still have no clues as to another potential suspect since apparently Freeze is innocent. It’s later revealed that Bruce actually paid his way to be on the jury just to make sure Freeze would be declared innocent. Although it seems that Batman made a grave mistake, as Bruce Wayne he’s gone to great lengths to make sure that justice is done fair–even for a repeat criminal such as Mr. Freeze. Hopefully next issue King will give us another suspect in our murders.