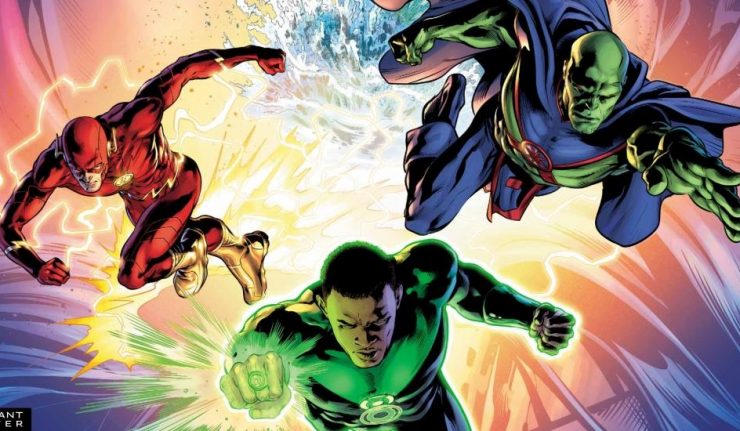 Hawk fight! Martian Manhunter, Green Lantern and Hawkgirl clash with Shayera Hol (also a Hawkgirl) when the League trio tries to break into a secret vault deep within Thanagar Prime—and the feathers are gonna fly! Speaking of secrets, M.M. learns one about himself and Lex Luthor, as related to him by the Martian Keep, guardian of all Martian wisdom and history. Meanwhile, back at the Hall of Justice, Batman, Superman and Wonder Woman must stop Starman from going nova.

A long-standing mystery of the DCU is the question of why Earth always seems to be the nexus of so many threats to the universe or multiverse. Why makes a backwater primitive world so central to cosmic events? It seems that this question has been much on the minds of many of the DCU’s alien worlds – especially the Thanagarians.

It seems that Thanagar has gathered weapons that can be used against Earth on their home world Thanagar-Prime. And Green Lantern John Stewart, Hawkgirl, and Martian Manhunter have just uncovered the most terrifying of these weapons: the Ascorbacon combined with the mental resources of the Martian Keep.

Meanwhile, Starman warns Batman, Superman, and Wonder Woman about the imminent coming of Perpetua. The Martian Keep describes her as the creator of the Multiverse that existed before the current Multiverse.

This description raises some questions. Is this earlier Multiverse the pre-Crisis Multiverse with Infinite Universes? Or is it referring to a Multiverse before that? Could DC be hinting at a return of infinite Earths?

I also find it interesting that the stellar energy leaking from Starman makes Superman stronger. It only makes sense, considering that Superman’s abilities are powered by solar/stellar energy. And it’s interesting that this represents a threat and not a boon, as it makes Superman feel as he “could crack the Earth in half with a single footstep.” I also love Batman’s succinct, but apt response: “Well don’t.”

It seems that once again Tynion is handling the writing duties this issue, although he and Snyder share the plotting credits. This seems to work best for this current high concept storyline, as Tynion seems better at merging the various complexities together into a coherent storyline. Their collaboration allows both Snyder and Tynion to bring their own strengths to the table, which provides the readers with a better story than either might have created on their own.

What happened to Mera? She joined the League after Aquaman went missing at the end of the Drowned Earth crossover and she even appears on this issue’s variant cover. So, why hasn’t she shown up since? Mera is a strong and underused character who didn’t get much of a chance to shine in her previous stint on the team. Hopefully Snyder and Tynion are planning on giving her that chance this time.

The various threads of the current Justice League title seem to be coming together, and it’s clear that Snyder and Tynion have been planning something big. This has all the makings of a truly epic story. But if it falls flat, it could also be an epic disappointment, but so far they seem to be pulling it off.