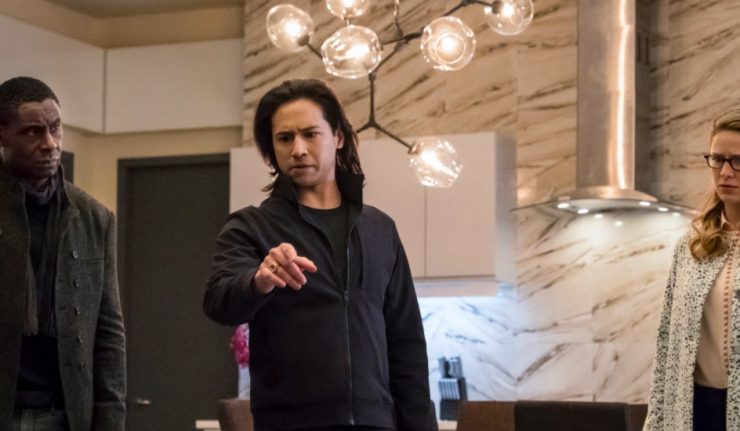 With his P.I. shingle newly hung outside his office, J’onn welcomes new clients. Trying to take her mind off what happened at the DEO, Kara decides to team up with J’onn on his latest assignment, which unfortunately ends up tying directly into Alex’s current investigation that involves the villain Menagerie. Meanwhile, Lena shares some news with James, but his reaction isn’t what she expected. Nia invites Brainy to her Valentine’s Day party.

I hope the show completely leans into the private investigator element because it’s a lot of fun to watch Kara and J’onn work together outside of the DEO.

The conflict between James and Lena is interesting. Colonel Haley offers Lena a government contract for her super powers work which James immediately objects to. I like that he stuck to his guns and his beliefs when she is potentially going to cross a serious line that he can’t support. Lena’s Luthor nature is really starting to come to life. She can’t even fathom that she could be wrong and she’s playing with power that she can’t handle regardless of her intentions.

Menagerie is a little generic. There’s nothing to the person or monster. I understand this is to give the Agents of Liberty an easy win but it’s still a dull conflict.

There are weird coincidences in this. J’onn and Kara are working on a missing person’s case and they just happen to be investigating the same thing that Alex is at the DEO. And then, Nina has a Valentine’s Day party and Alex just happens to run into some girl she dated in between seasons. This is the only purpose of the Valentine’s Day party. The script makes things a little too simplistic in a few places.

This is a solid episode. The main plot is generic and a little dull. I also think the script is a little contrived in certain places. But the character moments throughout and the conflicts they face makes it a lot more enjoyable.