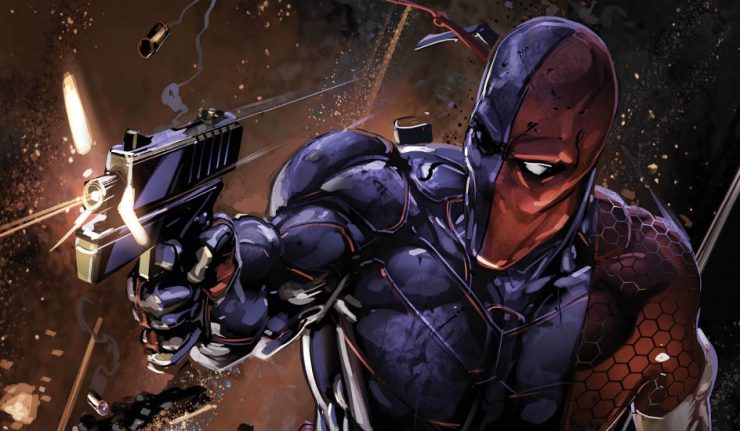 The inmates are free in the Teen Titans base! Located in a secret prison under the Teen Titans very own base Damian has housed some of his worst adversaries. Black Mask, Atomic Skull, Brother Blood and more are all imprisoned here! So what happens when Deathstroke releases them all? Nothing but utter chaos! But there seems to be a lesson to be taught here between Robin and Deathstroke! What lesson does the mercenary for hire have to teach the Boy Wonder exactly?

I have to admit, that I’m starting to enjoy the rivalry between Deathstroke and Robin! Damian comes off as almost obsessed in this issue with the capture of Slade Wilson, and even though Slade escapes, he’s still trapped in the Teen Titans headquarters thanks to a certain protocol that Damian has. I admit that once I found out how detailed this protocol was for the escape of his prisoners, I was pretty shocked. Priest and Adam really deliver on the action in this issue as well, with almost every page showing either the criminals attempting escape, Robin hunting them all, and also his confrontation with Slade–all done with painstaking detail. I also enjoyed the pairing of Kid Flash and Robin too. The friendship between the two seems to be pretty good, especially since you don’t see Damian relating to other people that much. I’d love to see these two taking down villains in their own story eventually.

I have to admit that my only real complaint in this issue isn’t the story itself–but rather Robin’s horrible leadership. You’d figure that the son of Batman would be a great leader to follow, but in reality he’s horrible. Why do you ask? Robin actually placed his team in danger by placing a prison right below their home base–without even telling his team! Not even Kid Flash knew about this secret prison, and I’m wondering now that the secret is out, what’s exactly next for this team as a whole? When the inmates break out, the rest of the team wonders exactly how their base got invaded while Robin is already making a plan on his own–without even informing his own team! Even Slade admits that the Boy Wonder’s actions could get the team killed, but Robin of course refuses to listen.

Deathstroke #43 is a good read and very entertaining. I enjoyed the book as a whole, and I’m really liking the emerging rivalry between Slade and Damian. Priest gives us a shocking ending thanks to the actions of Red Arrow and I’m eager to see how it all plays out in the next issue!